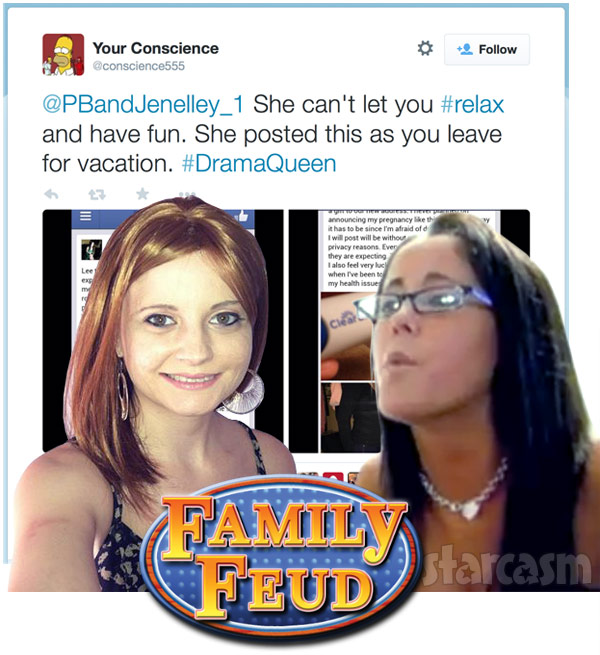 Teen Mom 2 star Jenelle Evans has been living a relatively drama-free life for an unusually long period of time, and it looked like 2015 would continue that trend as she and beau Nathan Griffith plan to spend early January on a tropical vacation. But those plans got derailed when her sister Ashleigh Wilson revealed on Facebook that she (Ashleigh) is currently pregnant and someone tweeted a screen cap of it at Jenelle. So how in the world did that rekindle the sisters’ ongoing feud? Here’s a timeline:

Lee talked me into telling everyone we are expecting a baby after my routine check up for medical issues and my ovarian cysts. Im getting rounder some people are noticing and asking if I’m pregnant. We don’t want to disclose the due date. We will be announcing the baby’s gender in the next few weeks wanted to keep it a secret. I’m halfway through my pregnancy we are ready to have this baby in summer. I to was going to keep it a secret only lee, my mom and myself knew I’ve been pregnant. (After this baby and repeat c section I will have a full hysterectomy for health reasons.) N other family member knew or friends knew. We are hoping for a girl. I wasn’t going to tell anyone because of jealousy individuals in my family& I don’t want everything posted online since all of my statuses are broadcasted for nosey people to copy paste and make lie and money off of.. We are expecting but I won’t be posting many pregnant pictures online & we won’t have a baby shower just a registry online so everyone can mail a gift to our new address. I never planned on announcing my pregnancy like this but, it’s the way it has to be since I’m afraid of drama. The pictures I will post will be without my face in them for privacy reasons. Every other mom to be can post they are expecting. There isn’t a reason why I can’t. I also feel very lucky I’m able to have another baby when I’ve been told I can’t have any at 19 with all my health issues.

As I mentioned, that post along with the photos below were screen capped and tweeted at Jenelle along with the message, “She can’t let you #relax and have fun. She posted this as you leave for vacation. #DramaQueen” 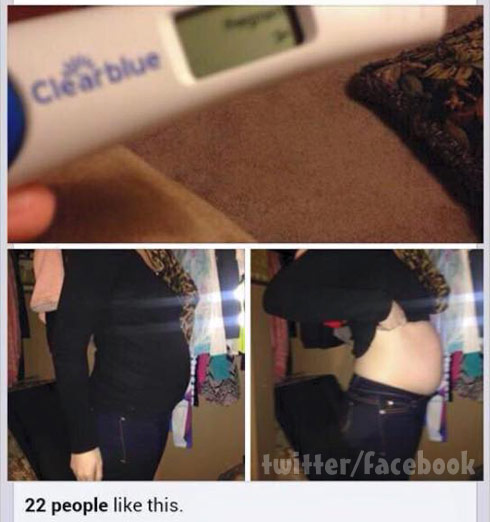 Jenelle retweeted the message and the pictures and replied by revealing the sex of Ashleigh’s baby! “Well it’s a girl,” Jenelle wrote, before adding, “my mom told me so no ‘secret’ there lmfao she wants to keep it a secret but want to kno all my business?” Next she wrote, “oh did I mention she has 101 diseases?! lol”

Jenelle then shared the screen caps on Facebook and wrote, “Congrats to my sister she is having a baby girl and happy she got pregnant with all her 101 diseases she made up herself.” 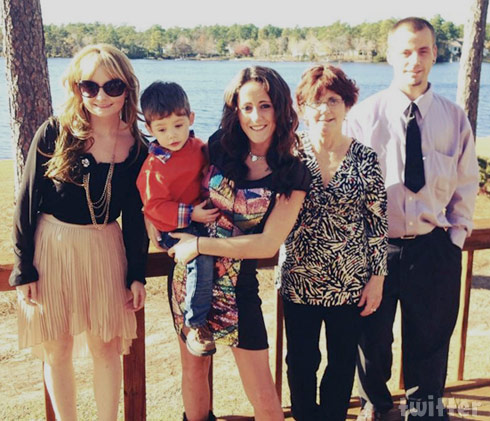 Within a couple of hours Ashleigh got wind of Jenelle’s posting and reacted with this message on Facebook:

Btw everyone I’m on vacation.. It’s sad my sister is so jealous of me I posted I was pregnant 2-3 days ago. So how am I ruing her vacation?? Im tired if the twitter sh!t.y mom said Jennlle has no internet access. Such a liar. I’m going to make another YouTube video when I get back from NJ tomorrow or this week if the b!tch won’t stop and leave me alone! It sad she can’t live without drama and jerks won’t stop screen shooting my FB. My mom even said she’s brain washing jace and done with her sh!t.

I called my mom and she said she’s having her “bipolar rages”for weeks. She can keep talking crap but no one cares and it doesn’t bother me. I’m eating dinner with lees family right now.

Stupid b!tch I don’t even have her phone number in my phone so how does she know about my life? She never asked? What about all the other crap she talks about other people including my helpless brother who is mentally ill?? No matter how much more crap Jenelle will say about me I win my life is and will be always better. Great fiancé, wonderful son, nice house, moving to Hawaii, having a baby, a great job. B!tch please grow up.. Let me make a YouTube video to set things straight. MYOB!!

I don’t care anymore I’m done with this drama. She wants to start sh!t let her. She could of ignored what the screen shot said. But because she hates me and is so self centered she is always going to start crap with everyone. I have my own life to worry about. I’m putting my foot down. This is the last straw. It was only a matter of time before she explodes on everyone including mom. She needs help and it’s not my fault she refuses to get help.

I know people who I can record and tell everyone she’s full of it. Let her talk sh!t. She thinks I’m sweet and not going to defend myself this time lets see when the cards turn. Twitter and online fans think they know her I know Jenelle for 23 years. I know stuff that others don’t. So let her keep talking crap.

Every 3-4 months I do better with my life she gets jealous lies about me and starts drama. In sept she accused me of being an alcoholic. She did the same to my mom. I’m tired of her. She needs to grow up.

My mom texted me and said she’s going to press charges in me when someone else took a screen shot of my FB and put on twitter she’s so full of it. I didn’t do anything and I won’t continue to have her try to ruin my life anymore.

Ashleigh followed up that post with a screen cap of a text message conversation with her and Jenelle’s mom, Barbara Evans, which she introduced with, “Even my moms sick of her sh!t..” 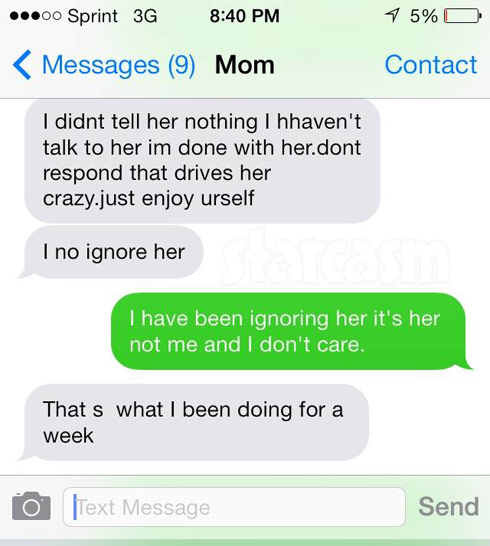 As a result of the drama, people began reporting Ashleigh’s photos to Facebook, including pictures of her son. “Now my profile picture is getting reported lol these won’t be removed by FB lol” Ashleigh wrote in reference to the photo below. 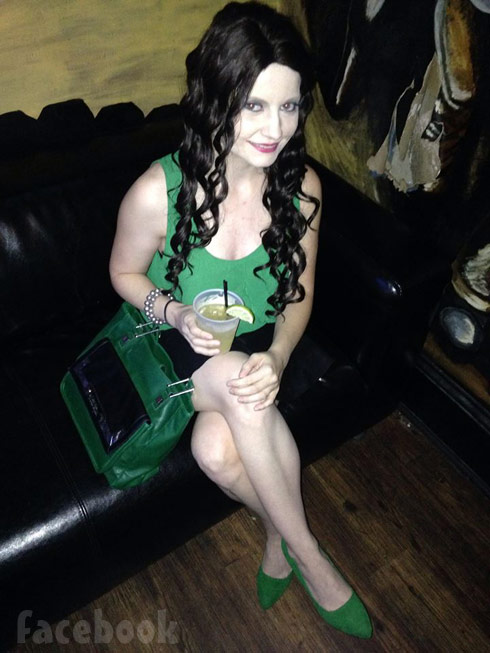 A commenter pointed out that “Whoever is doing it will probably get deleted themselves for harassment,” and Ashleigh responded at length:

It’s stupid is FB “reviews it” they won’t delete them I have the same pictures saved on my phone all I have to do is upload them again or edit them. Hey want to try to get under my skin. They won’t. All of my other photos are private.

Or they are going to try to make a fake profile and accuse me of crap. This is why I made a few things public because after years of online drama and bullying and lies everyone has said about me I figured I make a few pictures public because my sister destroys my reputation. Ever since I had Gabriel she’s been starting drama with me. Even if she does take me to court with all the proof I have for years ago and now she will loose. Some else posted my status off FB on twitter. It wasn’t me at all. I’m tired of this crap. Now I’m going to put my down and stand up for self just like a few years ago when I was accused if being a liar and I made those twitters and all the other crap. So I made a few YouTube . I don’t care I’m done with everyone shit. I’m glad I’m moving in a few months.

Meanwhile, Jenelle and Nathan have been having some rather SERIOUS issues getting their vacation off the ground — literally. I’ll let Jenelle explain what happened:

Don’t board with Spirit Airlines. They did not inspect their plane well enough and all the hydraulic fluid leaked out and we had to make an emergency landing. All passengers were bawling in tears and terrified. Now they had us a new plane for over 4 hours and we still haven’t boarded. I’m scared to ride again but gotta get to my destination! This sucks I can’t switch flights. Won’t even let me sit next to Nathan!!

Oh yeah! Also they have been lying to us telling us this and that just to make us calm. Well come to find out the hydraulics broke and they couldn’t get our luggage out of the old plane. Then had to wait for 2 JetBlues to unboard cuz they r federal and come first before anyone.

Still haven’t boarded and then the flight attendant was scared to get back on and they had to find a new one.

Still waiting to board lmfao

Well I just NOW got on the plane and now the captain is directing traffic down there, wow. This is really insane.

Guess everyone was scared to ride again. pic.twitter.com/nclxo5FBpG

A few hours after posting that photo, Jenelle simply wrote, “I’m pretty much convinced I was adopted.” On Facebook she seems to back up Ashleigh’s claim that their mom Barbara is taking Ashleigh’s side. “My mother has forgotten I’m her daughter.”

Afterward, Jenelle suggests that Ashley has a “sex website” under an alias! “While I’m loving life in paradise u can go to ur little sex website and sell ur ass to random Jacksonville men online,” she wrote. “Ashleigh Wilson. Or should we call u by ur fake name ?!”

In case you missed it, Jenelle and Ashleigh have quite the feudal history. Back in 2012 Ashleigh accused Jenelle of stealing $300 from her while she was in the middle of moving and spent it on pot.

The sibling battle escalated and culminated with Jenelle posting a video allegedly of Ashleigh in which you can hear her yelling at her son Gabriel because she wanted to go to bed.

Stay tuned to see if Ashleigh follows through on her Youtube threats. Who knows what that could mean!?!

VIDEO Danielle Staub reacts to Teresa Giudice sentencing: “I love you girl. You got this.”