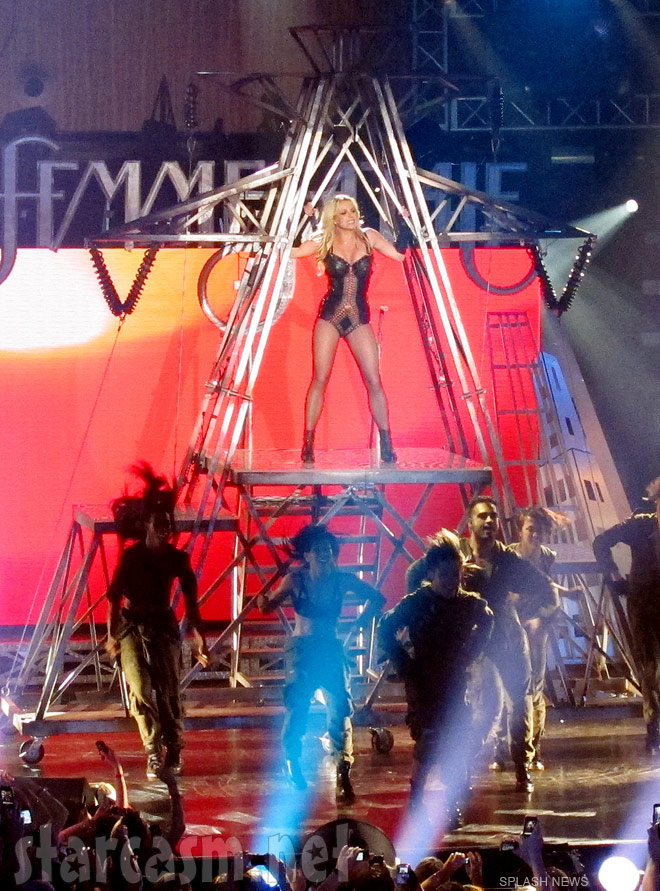 Britney Spears performed a three-song mini-concert at Rain nightclub in the Palms Casino & Resort in Las Vegas last night to promote the Tuesday release of her brand new album Femme Fatale. A scantily-clad and sexualized Britney performed three songs from the new album: “Hold It Against Me,” “Big Fat Bass” and “Till the World Ends.”

“Hold It Against Me” and “Till the World Ends” have been officially released but “Big Fat Bass” was new to those unwilling to listen to the unofficially leaked tracks that hit the internet almost two weeks ago. 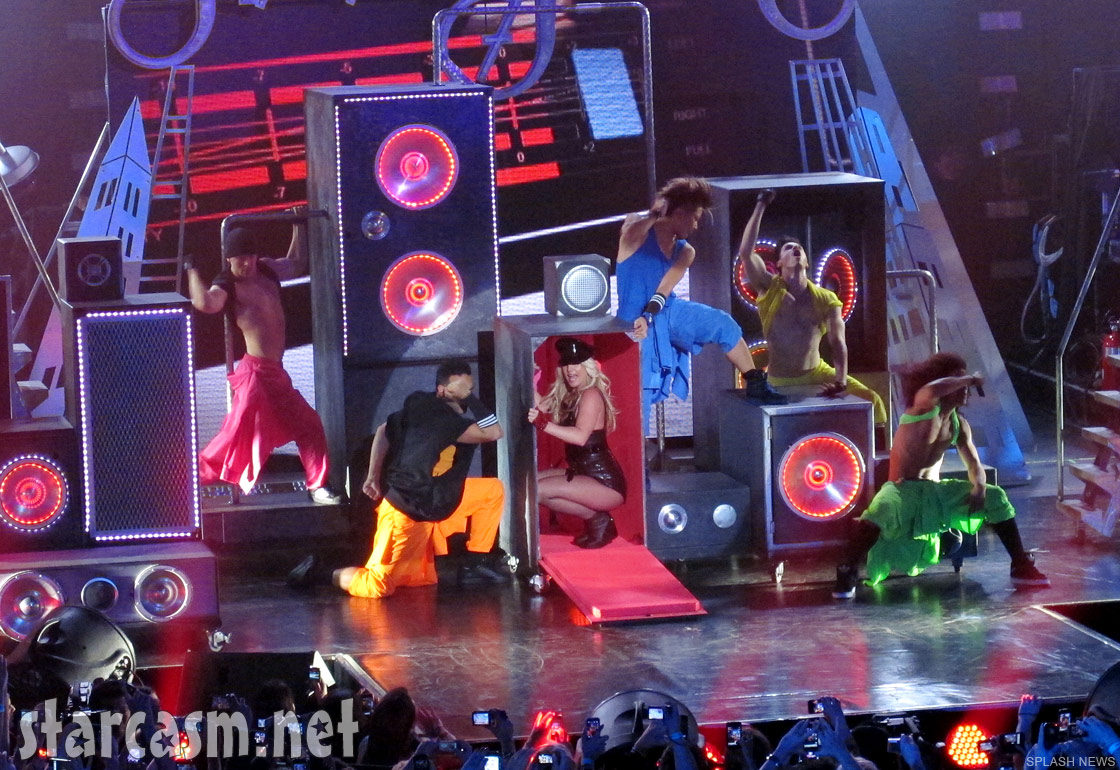 Britney was sporting an array of sexy burlesque-style stage costumes and performed alongside professional dancers in front of elaborate, colorful set pieces that included industrial caging and over-sized light-up speaker boxes during her performance of “Big Fat Bass.” Here’s a slightly edited video clip of her performance from TMZ:

The mini-concert was reportedly filmed for an upcoming special on MTV and kicked off a Femme Fatale promotional blitz that will include a trip to San Francisco for a Good Morning America special Sunday and an appearance on Jimmy Kimmel Live Tuesday March 29th (the release date for Femme Fatale). There are also rumors circulating that Britney will appear on stage at this year’s Kids’ Choice Awards as well as the Ellen Degeneres Show! 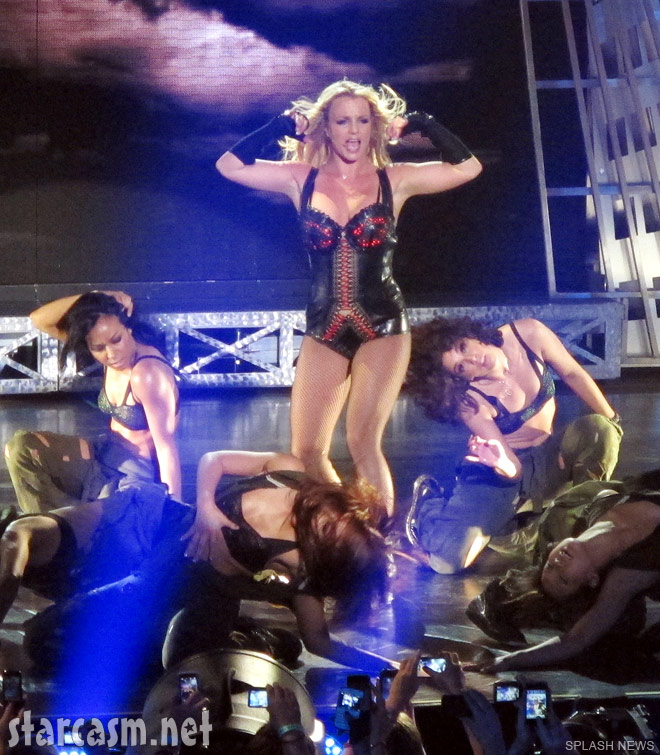 On a side note, Britney’s “opening act” was none other than Jersey Shore‘s DJ Pauly D! I’m guessing MTV was filming his appearance as well as part of his upcoming spin-off reality series.

If you’re in need of some Femme Fatale wallpaper images be sure to CLICK HERE and browse through seven high-resolution images from Britney Spears’ photo shoot for the cover art!

Or, you could just keep lookin’ at Brit Brit pwning the stage in Vegas! 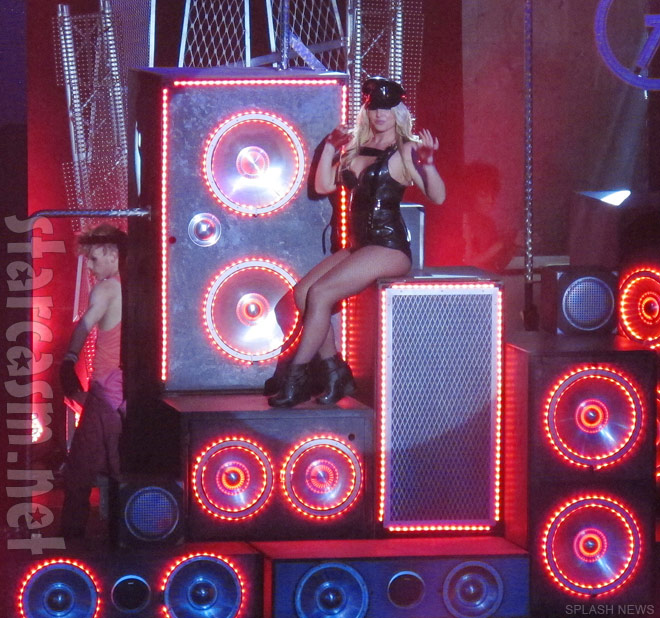 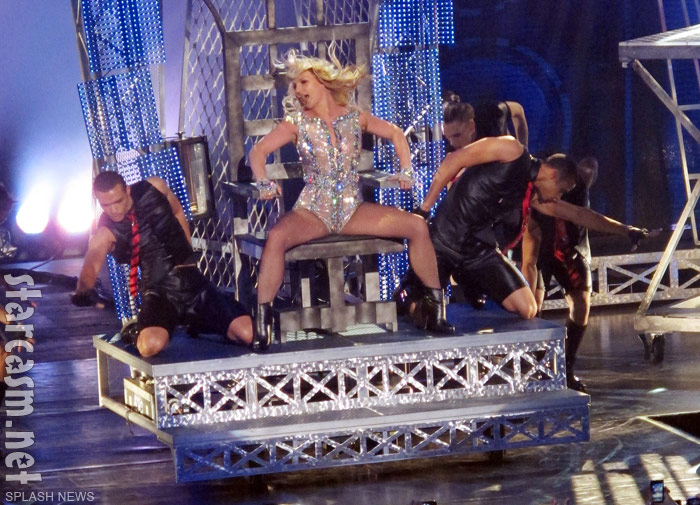 UPDATE – Here’s the official press release about the show from BritneySpears.com:

Las Vegas (March 26, 2011) – Palms Casino Resort welcomed Jive Records recording artist Britney Spears to Rain Nightclub for two surprise performances on Friday, March 25. The performance was filmed by MTV as part of an upcoming Britney Spears special that will air next week in celebration of her album release.

In front of more than a thousand fans, Spears delivered songs from her latest album, Femme Fatale including the singles, “Hold it Against Me,” “Till the World Ends” and “Big Fat Bass.”

“We are extremely excited to have one of the most iconic artists of all time back at the Palms. Britney’s performances were unbelievable and her fans will never forget this night,” said owner George Maloof. “We have a great relationship with MTV and feel fortunate to be a part of her upcoming special.”

This is not Spears’ first time performing in Rain Nightclub; she stunned fans with an unannounced performance in 2003.

DJ Pauly D, the exclusive Vegas resident DJ for the Palms, warmed up the crowd and kicked off the evening with his masterful beats and explosive sounds for club goers before Spears took the stage.

Femme Fatale is Spears’ seventh studio album and will be released on March 29.