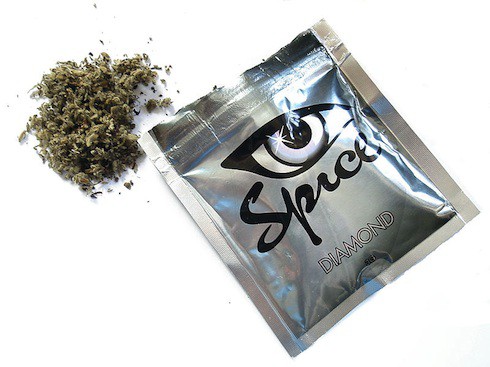 What is synthetic marijuana? An outbreak of synthetic marijuana-related hospitalizations over the past week have renewed controversy over and scrutiny of the mysterious product. Find out how it is and isn’t like actual marijuana, and why it’s such a touchy subject.

Last week, over 120 people in New York state alone were hospitalized because of adverse reactions to illegal–and highly misunderstood–synthetic marijuana. Most of last week’s victims suffered from the more common side-effects of the drug, including “agitation, anxiety, elevated heart rates and elevated blood pressure,” and seizures, which often require mechanical ventilation (better known as a respirator) to bring under control.

Synthetic marijuana was outlawed in the US in 2010. It’s listed as a Schedule 1 drug, which means it has no medically approved use, and that the potential for its abuse and misuse is high. So how is it still available for purchase in head shops across the country? And why are its adverse effects so radically different from those of your basic, garden variety cannabis?

To answer the latter question: It turns out that there really aren’t any connections between actual, grown-in-the-earth (or in water) marijuana and the “synthetic” sort, except that they both kind of look similar to the naked eye. Both are herbal. But the chemicals in actual marijuana are inherent to the plant. And the high you get from ingesting it comes primarily from THC, which, as we all know, is one of the great mellowers in existence.

Synthetic marijuana, on the other hand, is basically a collection of herbs with little or no effect on the body, but that have been sprayed with an assortment of chemicals that will do an assortment of different things. “Spice,” for example, in the photo above, claims on its package to be made up of a mixture of real herbs: Blue Egyptian water lily; dwarf skullcap; Indian warrior; and honeyweed, among others. Few, if any, of the herbs included have hallucinogenic properties. They do have vaguely drug sounding names, which is the main reason why they get a name check on the packaging.

And the chemicals sprayed on the herbs can vary just as widely. One of the most common is JWH-018, a laboratory-concocted chemical whose effects are somewhat similar to those of THC–but, as demonstrated above, whose side effects are far nastier. At least one death has been linked with an overdose of the compound, and dependence upon the drug is more likely than upon THC.

So why is this stuff readily available? Again, it’s a trick of marketing and packaging. Just as the producers are leaning heavily on the word “synthetic” to get away with a lot of non-cannabis shenanigans in their non-cannabis product, so do they sell the product for purposes that have nothing to do with ingestion. Spice and its many knockoffs are sold as incense, and the warning “Not For Human Consumption” features prominently on the wrapper. It’s rather like the copious bongs and glass pipes available in head shops: They’re sold for tobacco smoking, but no one can stop you if you buy one, take it home, and load it up with marijuana.

In short, according to Forbes’ medical reporter Robert Glatter MD, “Using these designer drugs is essentially like playing a game of Russian Roulette–the reactions are so unpredictable and variable, and it’s unclear what adverse effects could potentially occur.”

(Photo credits: What is synthetic marijuana via Flickr; USMC via public domain)

Miley Cyrus’ mom got her back into smoking

From the Good Problems Department: Washington state is growing way more pot than it can sell