It looks like celebrities have finally found a way to turn the intense media focus around on their own adoring public.  Conan O’Brien has done it and now Kanye West has used this new found power to instantly amplify the public awareness of random strangers.  Here is what you do.  You get real famous and have about 50 million people follow you on Twitter then you select just one random person to follow and instantly change that person’s life.

So who did Rapper Kanye West decide to grace with his Twitter follow annointment?  That person would be one Mr. Steven Holmes, a teenager from Coventry England.  Steven unassumingly made a comment on Kanye’s Twitter account when all of the sudden he found himself being followed by West.  Blown away, Holmes responded via his Twitter with the following:

This all seemed pretty cool if not incredulous to Holmes until the harsh reality of what being the only dude Kanye West follows on his Twitter account means.  As quick as the new world celeb making machine could, it starting turning its heat on little Steven.  He told the Coventry Telegraph that:

“About 20 seconds later I had 20 messages from people I didn’t even know and my phone wouldn’t stop bleeping.”

Since that simple click from the mouse of Kanye, Holmes has been under incredible pressure to deem his Twitter worthy of such admiration and attention.  Apparently it has all been too much, even though West showed encouragement by telling him to “tweet strong,” Holmes is letting the world who now cares know that it would be all-right if they went back to not caring again. 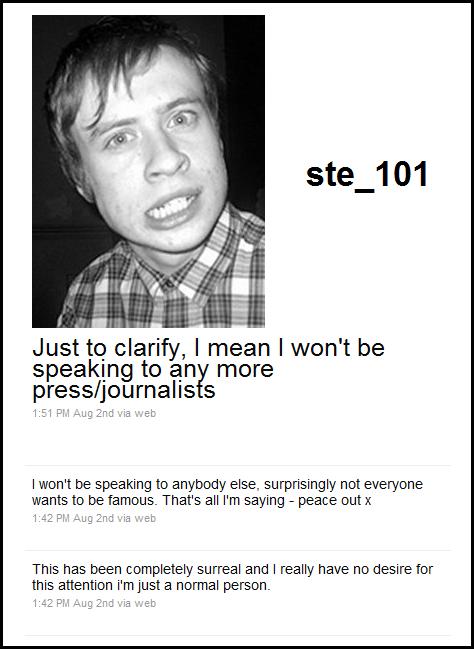 The whole affair is pretty funny but I can see how this could overwhelm someone unsuspecting and completely unprepared to handle the attention.  It looks like Kanye is still following Holmes and that Holmes has not selected to block him from doing so.  If he really wants this storm to pass he can just click adios to Kanye and we’ll all forget about Steven Holmes soon enough.