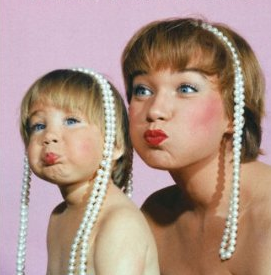 Shirley MaClaine’s daughter Sachi (short for Stephanie Sachiko) Parker: is revealing her new book Lucky Me: My Life With–and Without–My Mom Shirley MacLaine that her mom may not be acting too much when she plays cold women with firecracker personalities.

“She was very absent, very absent. I was very lonely, very lonely, definitely, and I still struggle with abandonment issues and loneliness,” 56-year-old Sacchi said as she opened up to ABC’s 20/20 about her 71-year-old mother Shirley MacLaine and her childhood. She says when she was a child her mother could only bear to be around her for about four hours before she found Sachi an intolerable burden.

Sachi lived most of her life in Japan with her father Steven Parker who was in an open marriage with Shirley for almost thirty years.

Shirley dated lots of men during her marriage, and looked at her husband as a friend more than a steady romantic partner. In 2011 she told Oprah that she once hooked up with several men in one day.

Here’s an 1980 clip of Shirley while she was still married to Steven, talking about being free to share love and sexual intimacy with many people:

Sachi says her father was emotionally abusive; constantly calling her an idiot and insulting her intelligence. When she was 14 years old and attending boarding school, neither of her parents showed up to take her home when the school closed for Christmas break, and she ended up spending two weeks with strangers.

Because her parents wouldn’t pay for her college, after high school Sachi found jobs as a maid, a waitress, and a flight attendent. Sachi also complained that her mother did nothing to help Sachi with her dreams of becoming an actress herself, but she did land small parts in Back to the Futurem, and Star Trek: The Next Generation.

During her mom’s mid-80s obsession with new age spirituality and UFOs (Shirley wrote a number of books during this time,) Shirley told Sachi that Steve Parker was not her real father, but a clone of her real father.

Trailer for Postcards from the Edge staring Shirley MacLaine and Meryl Streep. Sachi said recognized her mother in her mother’s character in this movie:

Noncustodial mothers by choice: Is it ever okay for a mother to leave her children?