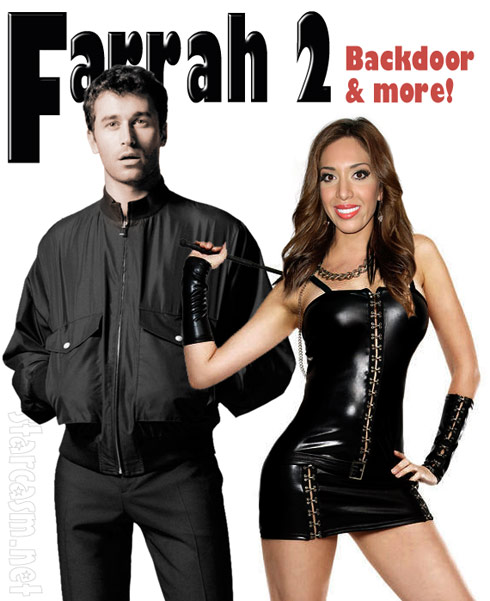 “We have learned there isn’t anything shy about Farrah,” Steve told Fishwrapper today. “She repeatedly tells the media she’s not a p0rn star, but she sure acts like one both on and off the screen.”

Here’s the catch: It seems the second installment was filmed at the same time or shortly after Backdoor Teen Mom. Back in August, Farrah’s frenemy/fellow Vivid star Myla Sinanaj told Hollywood Life about the tape’s existence.

“It’s boring. It has her in bondage gear, no ana|, and James Deen is in it,” Myla said. “I watched it. Vivid owns the tape, but they’re going to push it out as a leaked tape. Farrah wanted to film a second tape — a personal one — because the first one was seen by everyone. And she will pretend this second one was leaked.”

“I do have my own personal video at home that I watch,” Farrah told Hollywood Life. “One of my favorite parts is when I’m doing domanatr!x stuff, that’s what I personally was having fun with. It’s just for me.”

This seems to align with what Farrah proposed to Vivid in an email on March 27, 2013. (The email was exclusively leaked to Radar Online last month.) In the message, which had the subject line “Dream’N,” Farrah detailed her ideas for the “at home sex tape.”

“After being cute and sexy I want to rough up my boy toy a bit, and dominatr!x with him,” Farrah wrote to Vivid.

Considering the previous descriptions of Farrah’s “other” tape, it seems safe to assume Farrah 2: Backdoor and More was actually filmed last spring and Vivid is just capitalizing on it now. That also means Farrah doesn’t have a say in the company’s actions — and, therefore, can stand behind her claim the tape “ruined her life.”

“The new Farrah footage is off the charts! She could definitely teach a few p0rn stars some moves.”

* The 50 Shades of Greybraham image is from our “Top 5 Farrah Abraham sex tape titles” post, which is all of a sudden completely relevant again!