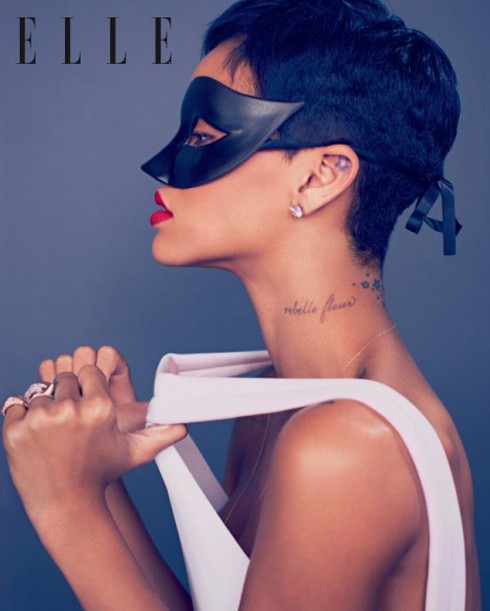 Rihanna may be thinking about settling down and having a family. In the April issue of Elle UK (via NYDN) she says she wants to have a child soon, and although she doesn’t name Chris Brown as the person she wants to have a baby with, she does go on at length about why she took him back after their domestic violence incident after the 2009 Grammys.

“‘Stay’ is a story about having love that close and wanting it to last forever. You don’t have that feeling with everybody so when you have it you don’t want to let go of it. I would definitely say that he is the one I have that kind of relationship with. What we want is a great friendship that’s unbreakable. Now that we’re adults we can do this right. We got a fresh start and I’m thankful for that.“I have my own reasons, very very private reasons [for taking him back]. Very personal. A lot of things. Bottom line is – I know him. I had a lot to think about and I had a lot of time to think about it. I was trying to do this for myself.”

When asked where she sees herself in five years:

“Shall I say this? I will probably have a kid. [Who’ll be the father?] I can’t tell you that. It’s not my business. It’s God’s business.”

The 25-year-old pop singer also denies that she has trouble with drugs and alcohol, which some suspect because of the way she portrays herself on social media.

“Everybody wanted to know what was happening in my life. Is she a drug addict? No. Is she an alcoholic? No. Is she a victim? No. That’s when I got the gun. It was a symbol of strength. I’ll never be a victim.”

Rihanna’s gun tattoo in on her side. Click here to see it.

The tattoo on Rihanna’s ankle that looks like a gun is actually an eagle. Click here to learn more about the possible inspiration behind that tattoo.

What do you think? Will Rihanna make a good mom? Should she have taken back Chris Brown?

Listen – Is Rihanna’s new single “Russian Roulette” too dark, too boring, or too addicting? Plus Lyrics

Dr. William Petit, who lost his family in the brutal Cheshire murders, is having another baby with new wife