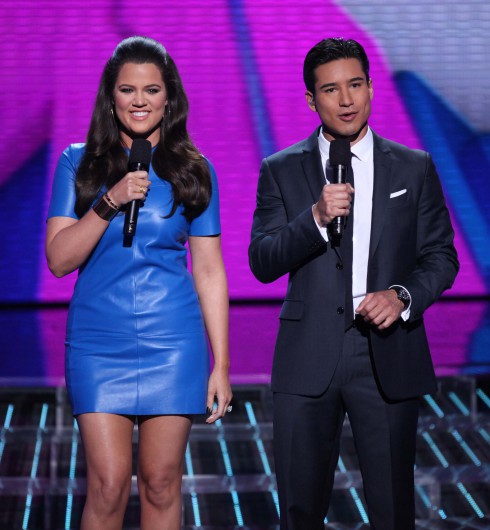 Did The X-Factor have a behind-the-scenes host showdown? They very well could have! Khloe Kardashian and Mario Lopez signed on to host the show last year but after just one season, producers have allegedly decided to cut Khloe and keep Mario aboard for the upcoming third season.

“They are asking Mario [Lopez] to come back, but not Khloe,” an insider confirms to The NY Post. While Khloe and Mario are a good-looking pair, their on-screen chemistry wasn’t up to par and some even accused them of being secretly paid off by their rival show, The Voice.

“I am sure there was a big percentage of Khloe’s fans who followed her to X Factor,” hosting expert Marki Costello told the Post. “But at the end of the day, when she doesn’t know what she is doing, are you helping your show or hurting it?”

“It was really hard for me to watch Mario with her,” she adds. “It made me, as a viewer, almost uncomfortable.”

Prior to joining the show, Khloe had no on-screen hosting experience (although she did host a radio show, The Mix Up With Khloé Kardashian Odom, during the time she was in Dallas with her husband) — a far cry from her co-host Mario who began hosting way back in 1992 when he appeared on NBC’s Name Your Adventure. Currently, Mario hosts the daily tabloid series Extra TV, as well as MTV’s America’s Best Dance Crew and Top Pop Group. Perhaps Khloe was just being out-hosted.

A spokesperson for The X-Factor tells The Post, “The producers have not yet made the talent decisions for this year.”