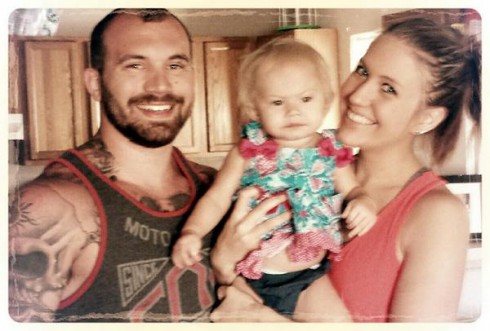 “Originally, the court had requested that Adam pay $550 a month, but Taylor never saw that money, and she never followed through with getting Adam to pay because they were still in a relationship on and off,” a source told Radar Online. “Adam only sees Paislee a few days a month at most and now Paislee has more needs. It would be nice of Adam to put in some help because she is his daughter, too.”

Unfortunately for Taylor, it seems Adam did not respond well to the request.

“Adam is threatening to take Taylor to court to try and get full custody of Paislee just because he doesn’t want to pay the child support,” the source said. “I doubt a judge would give him custody of Paislee with his criminal past and his ongoing legal battles.”

If (and when) Adam’s custody plan fails, the insider indicated he will likely petition for a lower child support payment because he believes Paislee can just stay at his gym’s daycare whenever Taylor needs a sitter.

“But it isn’t like the type of program that Taylor has her daughter in,” the source said, explaining Taylor would never go for the idea. “The gym only watches the kids and there is no structure to the gym babysitting.”

Even though Taylor, who is in another relationship, recently said she and Adam co-parent better now, the source said this latest episode proves that isn’t true.

“It’s on his own terms when Adam wants to be a father,” the source said. “He says he is a good dad, but a good dad isn’t someone who is in and out of his daughter’s life. A good dad is consistent with his fatherly duties — and Adam definitely is not.”

Christmas photos of the ‘real’ stars of Teen Mom 2