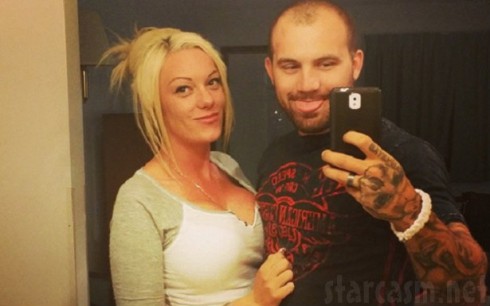 Teen Mom 2‘s Adam Lind is in a rage — but he says it’s not because of steroids. Responding to ex-girlfriend Jessica Nicole’s claims that he injected testosterone, got violent with her and paralyzed her dog, Adam says the stories are “all lies.”

Adam claimed there are simple explanations for the pictures Jessica Nicole posted on Monday: In the one where he’s injecting something, he says it’s just Vitamin B-12, a common supplement that’s also available in pill form.

“People take it all the time,” Adam said. “You can buy it from Wal-Mart or any local fitness or gym business.”

Adam said the other picture of the vials was likely just pulled from the Internet because she knew there were already rumors about him using steroids. (A source told Radar Online in May that Adam was illegally using steroids to bulk up and get attention.)

So far, Jessica isn’t backing down. In a text Instagram post this morning, she claimed Adam refused to return her things after they broke up, even though she allowed him to stay in the house leased in her name because he supposedly can’t get his own.

“I didn’t make ANY money off of Adam at all… I was OVERLY polite and left him with the house I rented… So that he could continue to see his kids! I even signed his new girlfriend onto the lease so that they could live together,” said Jessica, who also has a new partner. “Nobody’s jealous of anybody.”

Although Jessica said “thank god” she’s not bound to Adam by having any of his children, her accusations are reportedly concerning Chelsea Houska and Taylor Halbur, the mothers of Adam’s two daughters.

Teen Mom 2 renewed for Season 9, Jenelle is the only hold out

PHOTOS Jenelle Evans hits the beach in a bikini one week postpartum — plus what Kaiser looks like!