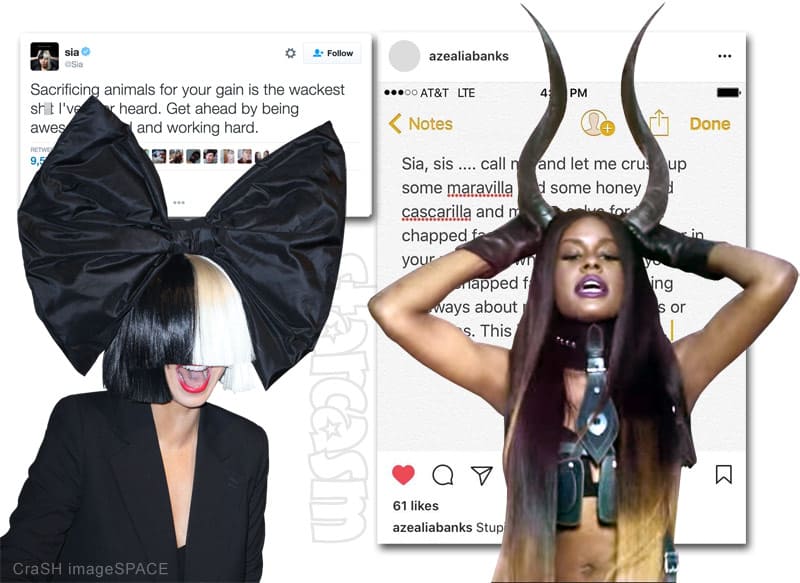 It’s getting where you can’t even post videos cleaning up your sacrificial chicken room without somebody getting upset! Such was the case for open witchcraft practitioner Azealia Banks this week as her bloody chicken closet clean up clip was met with harsh disdain from fellow singer (and open vegan practitioner) Sia.

The whole thing started with a video Azealia posted of her sacrificial chicken room/closet. “The amount of crap that’s about to come off my floor right now guys — oh my god,” a safety goggles wearing Azealia says at the beginning of the clip. “Three years worth of brujería,” she says as viewers are treated to a gruesome scene of walls and a floor covered in chicken blood and feathers.

Here’s the video clip, but be forewarned that it is a bit graphic:

Azealia Banks via instagram, cleaning the closet she's been performing brujeria for 3 years in. pic.twitter.com/0OsoSdJynw

“Yes, you know I gotta scrape all this sh!t up,” Azealia laments. “I got my sand blaster, my goggles — it’s about to go down.” The clip cuts abruptly and we see Azealia stating “Real witches do real things.” After that, she starts grinding away at years’ worth of unlucky poultry remnants.

It seems Sia caught wind of Azealia’s witch washing, and the vegan singer was appalled. “Sacrificing animals for your gain is the wackest sh!t I’ve ever heard,” she tweeted. “Get ahead by being awesome, kind and working hard.” (When I reread Sia’s tweet I realized that she doesn’t discredit the power of witchcraft at all, merely frowns upon sacrificing animals for your own gain. I have to confess that I didn’t do the research to find out what chickens are usually sacrificed for — feel free to let us know in the comments.)

Of course Azealia wasn’t having any of that! She posted a response on Instagram in which she called Sia a “pompous white b!tch” with an “ugly pasty dry white lady winter skin face.” Here’s that full comment, with some of the language edited a smidge:

And your ugly pasty dry white lady winter skin face is the ugliest fave [sic] I’ve ever seen that must be why you hide it all the time. HAVE SOME F***ING RESPECT FOR MY F***ING TRADITIONAL AFRICAN RELIGION YOU POMPOUS WHITE B!TCH.

After that irate comment, Azealia returned to Instagram with this screen capped note in which she once again goes after Sia’s face in defense of her religious beliefs: 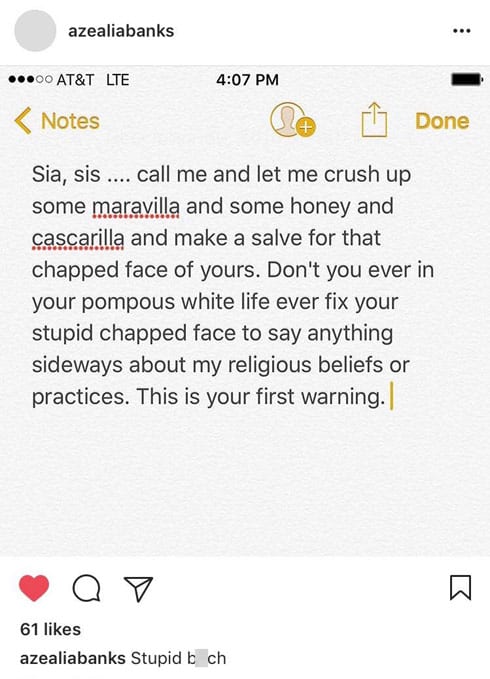 Sia, sis …. call me and let me crush up some maravilla and some honey and cascarilla and make a salve for that chapped face of yours. Don’t you ever in your pompous white life ever fix your stupid chapped face to say anything sideways about my religious beliefs or practices. This is your first warning.

So what do you think? Did Sia go too far by passing judgement on Azealia’s religious beliefs as a witch? Should she have only judged Azealia for being an untidy witch who should clean out her chicken killing closet more than once every three years?

Meanwhile, if anything remotely bad happens to Sia over the next couple of weeks (falling on stage, a health scare, fender bender, etc.), then the internet is going to blow up over it being because Azealia cast a spell or put a curse on her. Stay tuned.