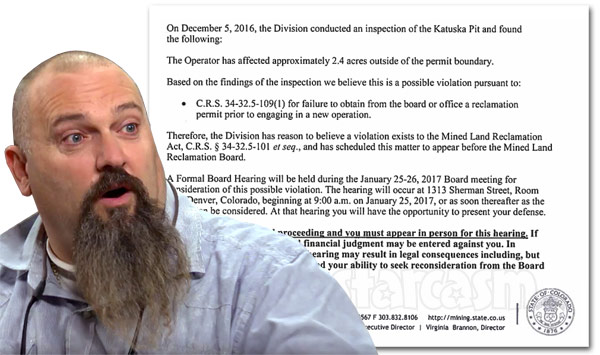 As we reported waaaay back in October, Gold Rush star Todd Hoffman and his crew of gold miners didn’t have much luck finding gold in their home state of Oregon, so they packed up their mining equipment (yet again) and headed a few states over to Colorado. Although we don’t know if their luck changed as far as finding gold, the Hoffman Crew does appear to be having some more bad luck as far as the Colorado Division of Reclamation Mining and Safety is concerned!

The commission received a citizen complaint on December 1 which indicated that the “Katuska Pit” mine (since renamed — or recreated as — the Fairplay Placer Mine) had performed mining activities and removed trees well beyond the boundaries allotted by the permit for the claim.

I will include the full report from the inspection below, but to summarize: it appears that the claim the Hoffman Crew was mining (under Todd’s company 316 Mining, LLC.) only allowed for mining in places that were mined before — prior to any reclamation laws. No virgin ground was to be disturbed or timbers removed.

The land was inspected on December 5 and the inspector found that there were trees removed and that there was mining activity (in the form of equipment storage, etc.) that took place beyond the boundaries set forth in the permit. As a result, the owners of the mine (Listed as High Speed Mining, LLC, which I assumed leased the claim to the Hoffmans) will go before the Commission at a hearing scheduled for late January. If found guilty of the violations, they could be fined between $1,000 and $5,000 for “each day of violation.”

Here is the inspection report with the photos that were included when it was filed:

This inspection occurred in response to a citizen complaint … received December 1, 2016, which alleged the Operator had mined outside the approved permit boundary.

The Katuska Pit is a 110c operation, approved for eight acres affected lands, for the extraction of aggregate (primary commodity) and placer gold (secondary commodity). Affected lands will be reclaimed to support residential post-mining land use. The operation is located approximately two miles northwest of Fairplay and immediately adjacent to the Middle Fork of the South Platte River. The area includes abundant pre-law disturbances resulting from historic placer gold mining activities. The operation was dormant at the time of the inspection and no mine personnel were present.

The south side of the operation is bounded by forested lands. The north side is bounded by the Middle Fork of the South Platte River. The main pit, located along the northwest corner of the site, was approximately one acre in size. A stockpile of cobble material was located along the north side of the pit, on top of a steep bank adjacent to the river. Several settling ponds were located beyond the south boundary of the permit area. The settling ponds were recently constructed in an area which was previously forested. Timber had also been recently cleared to construct equipment storage areas and a new concrete pad, located beyond the south boundary of the permit area. The Mining Plan clearly states the affected lands would be limited to areas which were historically disturbed and free of vegetation (no timber to be removed).

The affected area was traversed with a Trimble Juno 3B Global Positioning System (GPS) unit. The Division was unable to traverse the permit boundary along the north side of the mine where it follows the center line of the river, all other affected areas were encompassed in the field survey. The data collected in the field was downloaded using GPS Pathfinder Office software and the affected area was overlain onto a Google Earth image, dated September 8, 2016. The affected area, as determined by the field survey, totaled 103 acres. As noted above, the Katuska Pit is permitted for eight acres of affected land. The Division estimates the Operator has affected 2.4 acres outside of the approved permit boundary. Pursuant to C.R.S. 34-32.5-123(2), Operators who mine substantial acreage beyond the permit boundary may be found to be operating without a permit.

Based on observations made during the inspection and recorded in this inspection report, the Division has reason to believe the Operator is in violation of C.R.S. 34-32.5-109(1), for failure to obtain a reclamation permit prior to engaging in a new operation. The possible violation has been scheduled for the January 25-26, 2017, Mined Land Reclamation Board Hearing. Official notice of the hearing will be sent under separate cover. 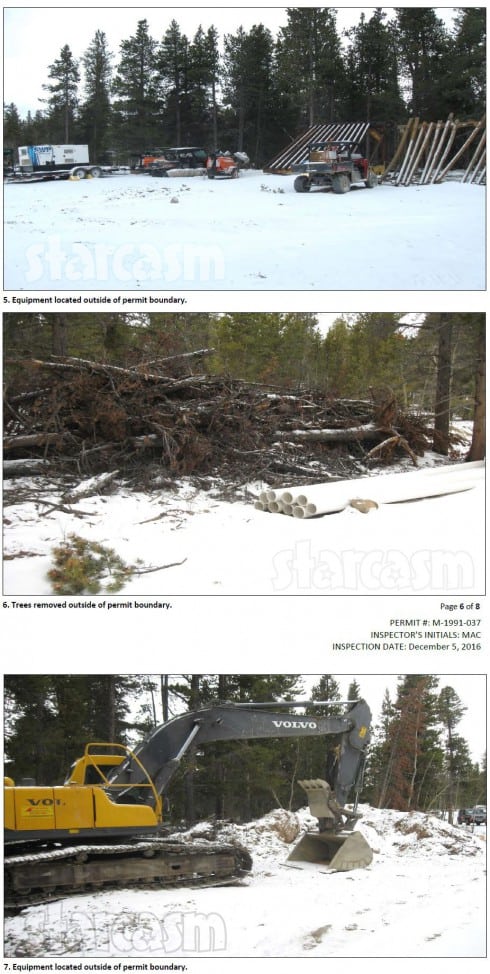 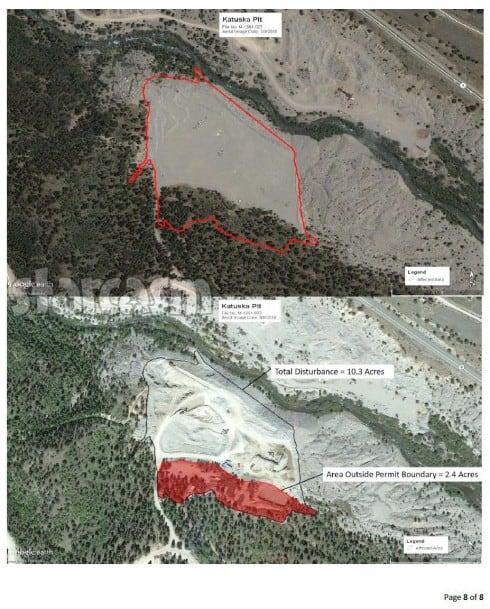 Here is a copy of the letter sent to High Speed Mining, LLC. making them aware of the potential violations and the scheduled hearing date: 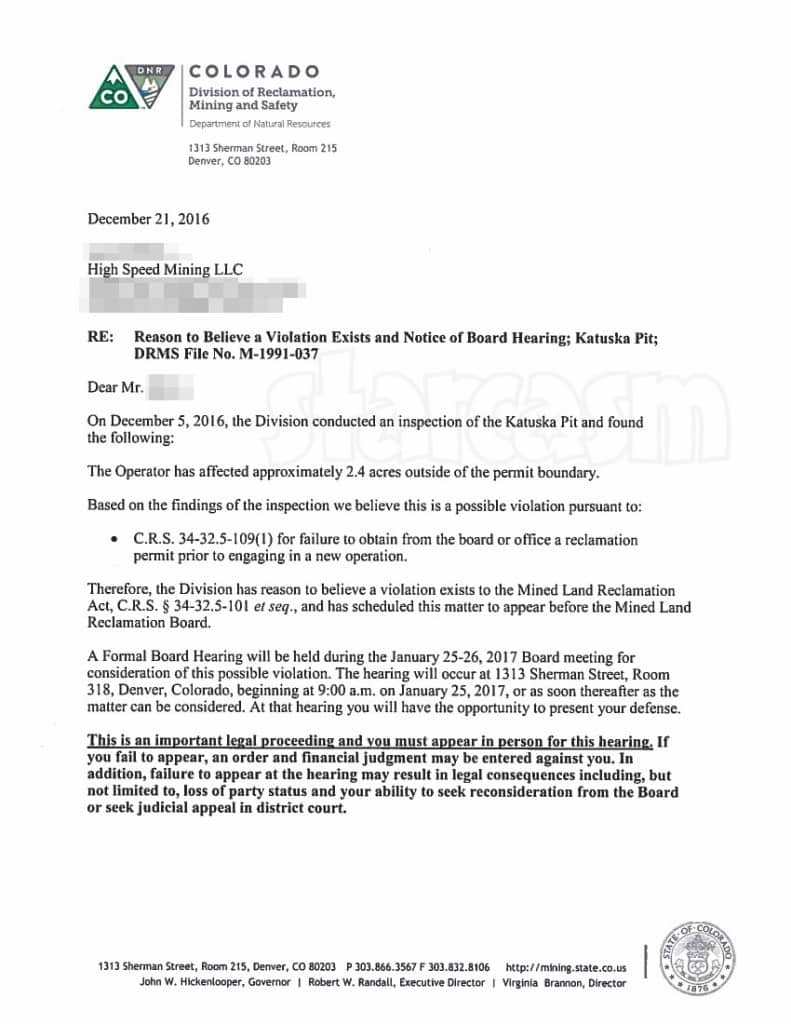 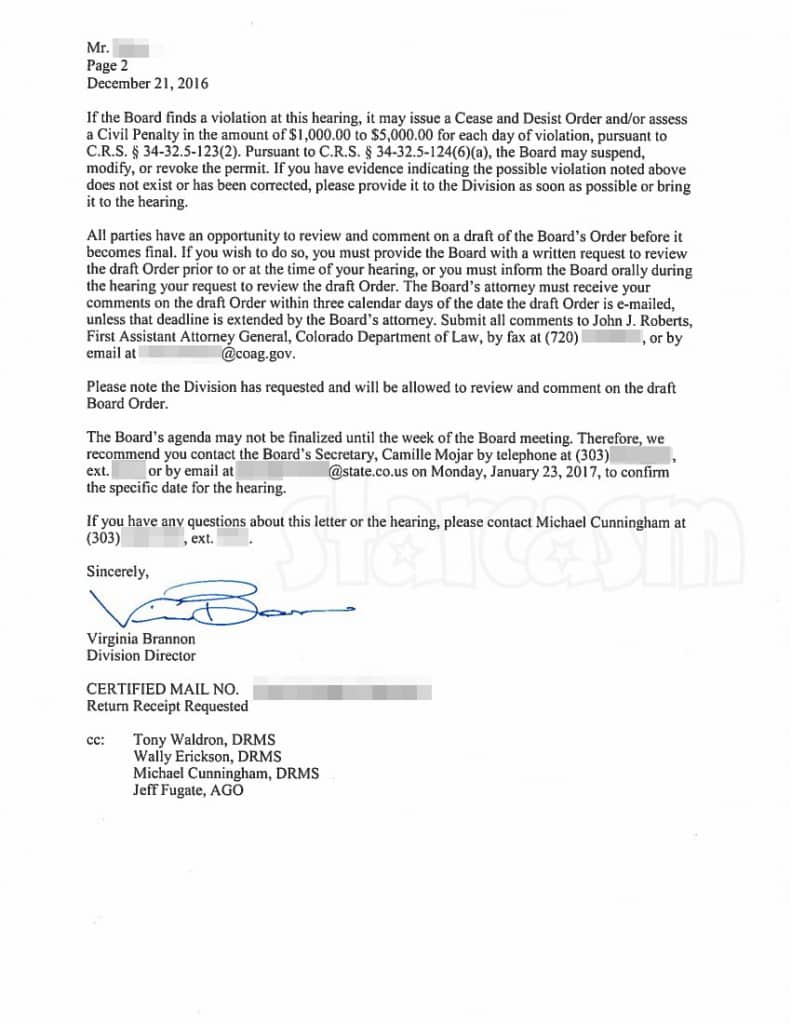 Also included in the report was the initial citizen complaint, which contained other allegations not covered in the field report about the boundaries of the permit:

I also assert that 316 Mining, LLC, an Oregon LLC, was not registered to conduct business in Colorado.

Those allegations have not been officially addressed as of yet. It could be that they will be part of the hearing in late January. Stay tuned!

UPDATE – At the hearing, the Colorado Division of Reclamation, Mining and Safety found High Speed Mining guilty and levied some HEFTY fines! Click here for the Board’s complete findings and ruling.