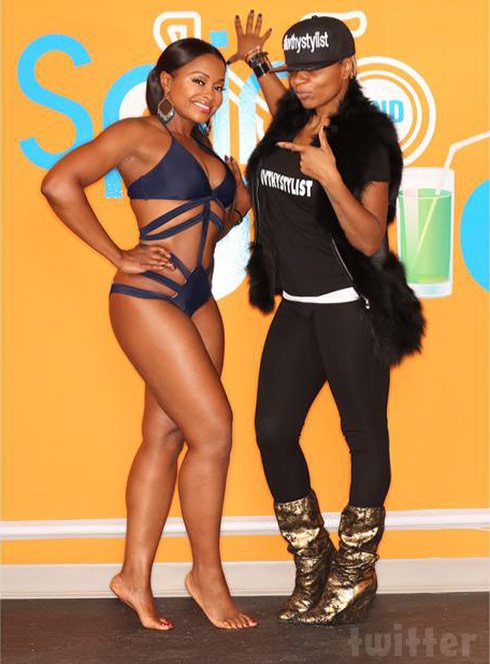 It looks like the combination of Xenadrine supplements and the Donkey Booty Workout are doing wonders for The Real Housewives of Atlanta‘s Phaedra Parks!

Since been announced as a spokesperson for Xenadrine last March, Phaedra has been diligent about promoting the weight loss supplements via social media, but a picture is worth a thousand words right?

In addition to Xenadrine, Phaedra’s weight loss success may also be attributed in part to frequenting Gym Juice in Atlanta. In addition to posing for the photo above at the business’s “Spin Juice” spinning studio, Phaedra also likes to look damn good and drink their juices:

Forget the funeral home, Phaedra may soon be launching The Phaedra Agency School of Fashion! Look out Cynthia Bailey! 😉

Losing weight, being an attorney, mothering two children while dad’s in prison, being a reality star, and selling pink stun guns and “Fix It Jesus” t-shirts is clearly too much for one person to handle, so it only makes sense that Phaedra is following in the heelsteps of Sonja Morgan and hiring herself an intern! (Or maybe interns?) Phaedra made the announcement earlier today on Facebook and Twitter. Here is what she is looking for and how to apply:

Are you smart? A quick learner? Great communicator? Enthusiastic? Motivated? If you answered yes to these questions, apply today for Phaedra’s summer internship program. Send your resume and cover letter to internwithphaedra@gmail.com. ‪#‎InternWithPhaedra‬

Everybody knows… interning with Phaedra would be a crazy blast! (I can’t even imagine.) I’m thinking there may be a concept for a new Bravo reality series here. The Real Housewives Interns. It could star interns from multiple franchises who communicate via text, phone, email and skype sharing all kinds of dirty deets and secrets about their bosses and each other. I confess I’d be glued to the premiere.

Meanwhile, we will have to make do with The Real Housewives, including Phaedra and her RHOA costars airing new episodes every Sunday night at 8/7c on Bravo.

Matthew McConaughey is wasting away!