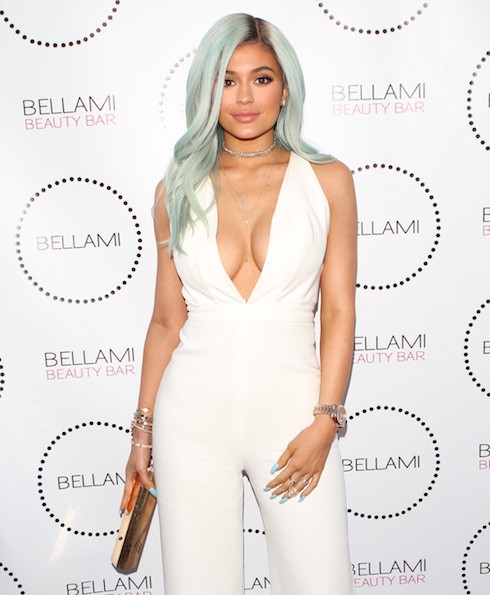 Kylie Jenner’s blue hair is back. The 17-year-old was out and about in LA to promote her new line of hair extensions–and she did so as prominently as possible, given the recent rumors that she’s had breast implants.

Kylie rocked blue tresses at the Bellami Beauty Bar up in West Hollywood. It was the third time in the past year Kylie showed off the color, following this past spring’s Coachella appearance, and her debut in blue at Kim and Kanye’s wedding last summer.

(Quick side note: Some news agencies are reporting a “mint green” or spearmint-y look for the hair. What do you, the viewers at home, think?)

The low cut of Kylie’s top also got a great deal of attention. “Incredible cleavage,” said the Daily Mirror. “Insane,” said Us Weekly. And, indeed, it’s the most attention Kylie has brought to her chest since the breast implant rumors started. “She clearly looks like she’s had implants placed,” said prominent plastic surgeon Dr. Steve Fallek just a few months ago. Kylie herself has never outright denied the claims–she’s just said that she uses “a whole lot of tape…to hold these up.” 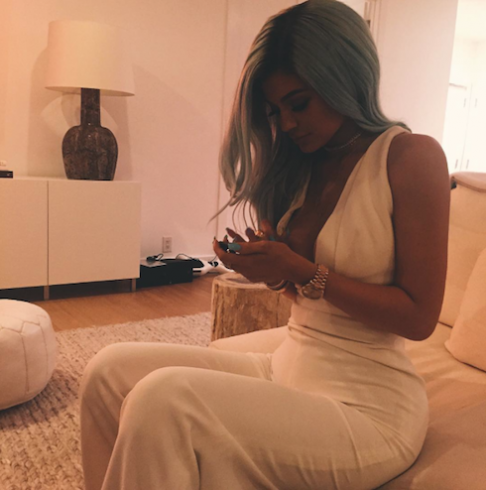 Tyga denied all claims through his attorney, and said the nude selfies that appeared on Isabella’s phone were planted there by someone else. He’s called on the FBI to help with his hacking allegations. The Bureau, though, has yet to comment. Nor has Kylie made an official statement on the matter, through either her reps or on social media.