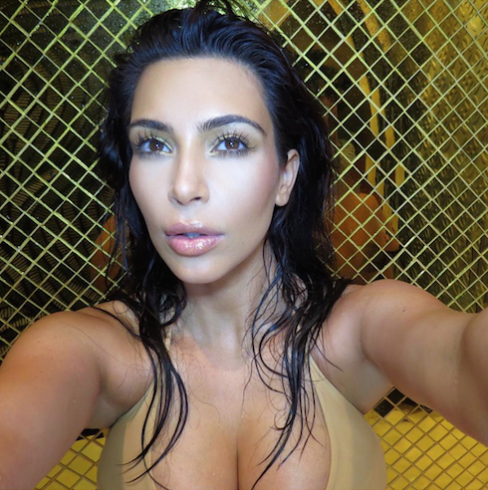 Kim Kardashian is still the queen of the selfie, no matter what the lackluster sales of her selfie-based book Selfish might suggest. She’s long yearned for selfies with hard-to-pin-down celebrities–and Hillary Clinton has long been at the top of her list. So Kim was understandably excited before a Hillary Clinton fundraiser in Los Angeles, last night, and couldn’t help from both tweeting and Instagramming out her wildest dreams before the event:

On the same night that the Republican candidates took to a Cleveland stage for their first debate, Kim was quick to refer to Clinton as “our next president.”

Excited to be meeting our next President tonight!! Maybe she’ll take a selfie with me!

The fundraiser, which took place at the swanky home of Scott Braun (who manages Justin Bieber and Ariana Grande, among others), featured ardent Clinton supporters such as Jeffrey Katzenberg, Mary Steenburgen, and John Travolta. But there was just enough elbow room for Kim to get her prized selfie–which features a goofy, lurking-in-the-shadows Kanye, just for good measure:

I got my selfie!!! I really loved hearing her speak & hearing her goals for our country! #HillaryForPresident A photo posted by Kim Kardashian West (@kimkardashian) on Aug 6, 2015 at 8:40pm PDT

Of course, Kim Kardashian wasn’t the only member of her family to strike a pose with the former Secretary of State. Matriarch Kris Jenner also got in on the action–though her photograph was less of a selfie and a bit more composed:

An Honor to meet you Hillary Clinton! Great evening… #ohjustchatting

Why is Kim Kardashian ineligible for a star on the Hollywood Walk of Fame?