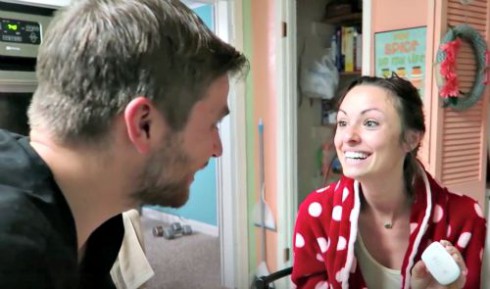 File this one under “Wow!” In a new video from YouTube vloggers Sam and Nia Rader, he managed to reveal her pregnancy…to her.

To start, Sam teased Nia about how she shouldn’t drink wine or eat bologna. When she didn’t catch on, he brought out the positive test he managed to sneak from her. Even then, she thought he got it from someone else!

So, how did he do it? While he was working at night, Nia texted Sam to say her period was two weeks late. He knew she takes a few trips to the bathroom throughout the night–and that, in order to avoid waking their two kids, she doesn’t flush–so he decided to see if he could get a sample from the pot that would register on a pregnancy test. Lo and behold, the urine wasn’t too diluted–and the result was a big, fat positive!

Does anyone here not know we’re having another baby? Our announcement may be going viral. Link in profile.

Since the video went up on YouTube this Wednesday, it’s earned more than 4 million views. New fans can continue following the adorable family on their channel, where they share new videos every day.

Nick Lachey and Vanessa Minnillo are expecting their first baby!