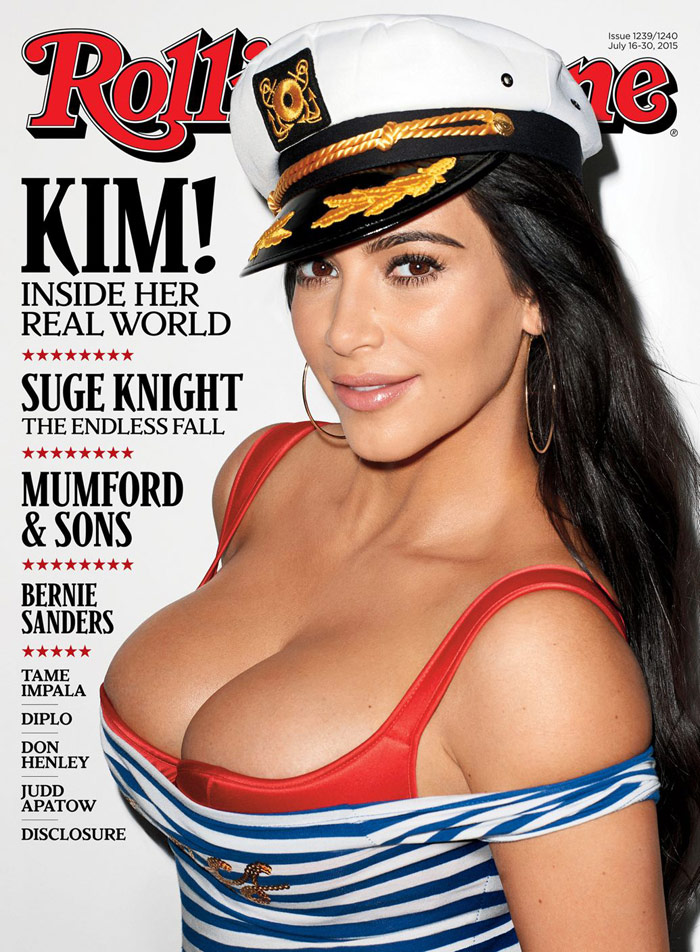 Kim Kardashian and her famous non-rolling boulders grace the cover of the July 3 issue of Rolling Stone. In the lengthy cover story, Kim dishes on everything: including her sex tape; living with OJ Simpson; her secret marriage; discovering then-Bruce Jenner in women’s clothing more than a decade ago; and what’s going on with her brother Robert Kardashian.

As far as Rob, Kim says his recent aversion to the public spotlight is easy to explain. “It’s not that mysterious, what’s happening with Rob,” she says. “He has gained weight. He feels uncomfortable being on the show, and that’s OK.”

As fans of the show and family know, Kim isn’t one to pull any punches when talking about a family member, and Rob is no exception. “Do I think he smokes weed, drinks beer, hangs out and plays video games with his friends all day long? Yes,” she says. So is it “like hookers and meth at the Ritz?” Kim is asked. “No, no,” Kim says, laughing. “Or he’d be skinny.”

And here’s how the magazine rendered Kim’s recollection of stumbling onto Caitlyn wearing women’s clothing in the garage more than 12 years ago:

I was shaking. I didn’t know if I’d just found out his deepest, darkest secret, and he was going to come after me. [Bruce] called me on the phone a half hour later, and said, “One day, I’ll talk to you about this. Until then, don’t tell a soul.” Eight years later, he said, “Let’s have that talk.” Before Kim’s wedding to West, Kardashian talked to Kanye about it. “I wasn’t sure if Bruce was going to be comfortable walking me down the aisle,” she says. “He had just had his trachea shaved, so I knew something was going on.” She was afraid of what West might think, but West calmed her concerns. “[Kanye] obviously moves to his own drum,” she says. “He lives his life the way he wants, a really authentic life, and he was like, ‘If you can’t be authentic and you can’t live your life, what do you have?’

For more highlights from the article, hop over to RollingStone.com. For the full thing, pick up your copy of Rolling Stone on newsstands this week!