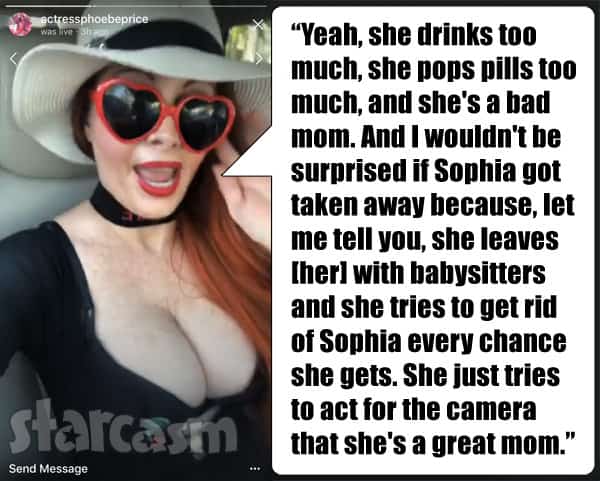 Yesterday we wrote about a month-old video of Phoebe Price throwing her gal pal Farrah Abraham under the bus after Farrah’s Beverly Hills Hotel arrest. In the paparazzo street interview, Phoebe claimed that Farrah has a “drug problem” and gets “outta control” when she drinks — among other things.

Our post seemed to ignite quite the firestorm, as both Phoebe and Farrah wound up talking with Radar Online about the interview, with Farrah chalking up all of Phoebe’s derogatory comments to petty jealousy. That REALLY set Phoebe off: she took to Instagram for a live video session in which she UNLEASHED her anger by pointing out all the reasons she is not jealous of Farrah!

First of all, here is Farrah’s statement to Radar:

I don’t drink at all. I’m training two times a day for my boxing match. I don’t speak with her any more as she is jealous of my success. I’m too busy running companies, working on my next shows, films and being with my child. LA is full of negativity and I haven’t spoken with her since Coachella. She’s a horrible person.

Phoebe Price did an Instagram live tease earlier today announcing that she would be returning soon to “spill some tea.” She brought up the jealousy comment by Farrah: “You’re a f**king hooker that has to go to Dubai, so nope, I’m not jealous of you,” Phoebe said.

When Phoebe returned, she had on her makeup, her sunglasses — and her attitude, and delivered on her promise by GOING OFF on Farrah. Phoebe once again accused Farrah of having a “drug problem” and said that she “drinks too much” before telling Farrah: “You are a bad mom! Your child should be taken away because you are not right.”

Most sites will be posting excerpts of what Phoebe said in her diatribe, but I felt it was best to transcribe it in its entirety just so no statements get taken out of context. I made a few alterations — some due to grammar, and a couple just so I will know when other sites copy and paste me 😉

Take it away Phoebe: 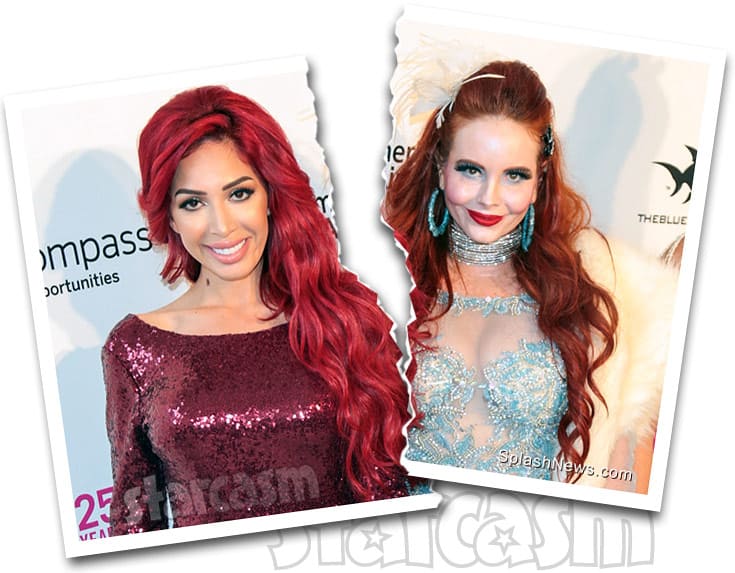 So today in the news it said that “Phoebe Price says Farrah Abraham has a drug problem.” I was really nice to Radar Online, and really wasn’t going to throw her under the bus, you know, and I really watched what I said. But since, she has come out and said that I am jealous of her.

First of all I am not jealous of a girl that has to f**k for a living. You know, the only reason she’s on Teen Mom is because she got knocked up. She’s a skanky a** b*tch to get knocked up at 16, let’s just be for real. And then she likes to capitalize on [Sophia’s] dead father, you know, that way she thinks that she can get more people’s attention or whatever. which is SICK!

Second of all, Farrah Abraham is a bad mom. This lady left her child at Coachella with my mother that had brain cancer. And would leave during the middle of the night saying: “Oh, I’m going to get water,” and comes back home seven or eight hours later all f**ked up looking.

Yeah, she drinks too much, she pops pills too much, and she’s a bad mom. And I wouldn’t be surprised if Sophia got taken away because, let me tell you, she leaves [her] with babysitters and she tries to get rid of Sophia every chance she gets. She just tries to act for the camera that she’s a great mom.

Let me tell you, at Coachella, I’m not surprised that dog died. [Phoebe is referring to the passing of Farrah and Sophia’s dog Blue last week.] Because I am a huge dog lover, as everybody knows, Henry is my life. And at Coachella I had to water and walk these dogs because she neglected them, she left hem in a basket for the dogs not to run around. How would you like to be trapped in a basket for three days? I mean these dogs were starving for attention. And when they barked she sprays water in their face. Like who does that?

She wants to to say I’m jealous of her? Every part of her body is fake. Sorry b*tch I’m real. My a** is real, My t*ts are real my face is real. Nothing about you I’m jealous of. Because you know what, you’re so scummy you had to get on camera and f**k. And let me tell you, your name is “Backdoor” because you get it in the a** you nasty woman. Like for real! you are disgusting!

And for a woman to have their child video tape their vagina rejuvenation? Your child should have been taken away at that moment. And I said to her, I was like: “What is wrong with your vagina? Because I’m older than you and my vagina is right and tight, so you must be wore out.”

Yeah, she went to Dubai to see a man. Hello? She’s on dating websites. She’s had restraining orders against guys. Everybody’s out to get Farrah. Everybody is sooo jealous of Farrah. Like what the f**k has Farrah done? B*tch I’ll outsell you any day of the week in all the magazines. You don’t make fashion. Anyways, you weren’t invited to Oscars b*tch you got in on my ticket at Elton John’s. You couldn’t get on the carpet at the Cannes Film Festival, you had to use my designers. But oh, you are so famous and so powerful Farrah.

B*tch, nobody likes you. You told me you have no friends. You accused Simon of drugging you for years. You accuse your mama of being a wh*re. And you know what b*tch, you are a BAD MOM! Your child should be taken away because you are not right. You’re bipolar, you need help, you have a drug problem, and I hope child services steps in to mentally evaluate you because you need help.

So everything that happens in your life is everybody else’s problem. The night before Oscars at [Barry’s?] on Cannon — the wine bar right next to Wolfgangs’s — she said she walked in there five minutes and they started chanting “Kick her out!” Well no sh*t, b*tch, nobody likes you! You told me you don’t have any friends, and all of my friends say “You know what Phoebe? you did the right thing about coming out and confronting her because she will be the next Demi. Watch it.”

She jumps from one thing to another. Now she’s going to be a boxer? B*tch I hope you get your face gets knocked in! That’s what happened with Mickey Rourke, so yours is next.

Nobody wants anything to do with you. Nobody wants to work with you. I was there when MTV let you go, you know? You think you’re so popular and everybody loves you? B*tch you need to get a life. You could have a good life, but you need to get out of your crazy head because you keep repeating the same things about everybody. Even your ex best friend slapped you in the face at the [Abby?] a couple of months ago.

So every friend you have leaves your a** because all you want to do is fight, drink, do drugs, and run your f**king mouth. Go get your vagina fixed again, get your face fixed, get your nose fixed from going [Phoebe holds one nostril and snorts]. Yeah, y’all know what I mean. So, Farrah, you come for me b*tch. You spilled — while you were high one night — you spilled your guts for four hours. Remember that!

I assume we will have a response from Farrah soon, so stay tuned!