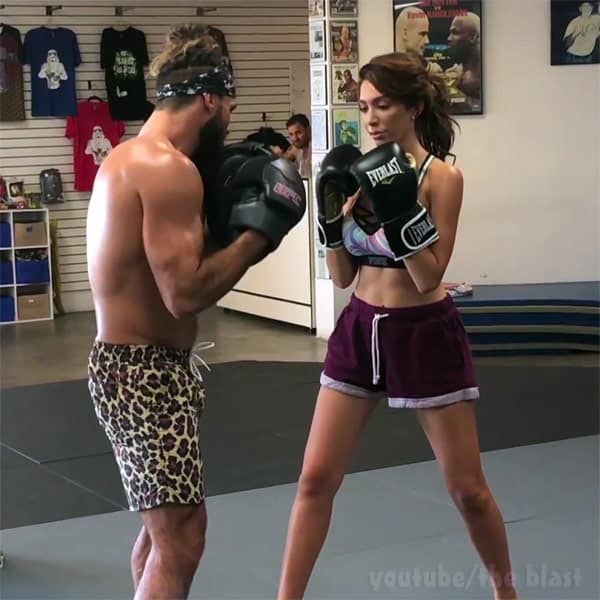 Former Teen Mom OG star Farrah Abraham will be taking her infamous haymaker dodging skills from the Reunion stage to the boxing ring as she has just signed on with promoter Damon Feldman to participate in an upcoming Celebrity Boxing match!

Farrah says that she is going in the ring to help raise awareness for anti-bullying, and she has already begun her training with Baywatch star and fitness trainer Jeremy Jackson at the 10th Planet Jiu Jitsu gym in West Los Angeles. Check out the video:

Organizers have begun the search for Farrah’s opponent, and Farrah talked with The Blast about who should would be willing to fight.

“Who would I want to beat their butt?” Farrah clarifies. “There’s so many…maybe some of the Teen Moms who talk trash about me and bully me.” She then opens the Teen Mom door a little wider by suggesting she could box one of the producers from the show. “Maybe Morgan Freeman should step out,” she says of the Executive Producer, who had the infamous sit down conversation letting Farrah know that MTV would no longer be filming her if she continued to pursue business endeavors in the adult industry.

Farrah continued by bringing up her recent feud with Mob Wives star Drita D’Avanzo. “You know, Drita said she wanted a piece of this,” Farrah says, before having second thoughts. “But I don’t know if she’s for anti-bullying because she’s all about bullying.” (Hmmmm… Could the whole Farrah vs. Drita thing have been staged and leading up to this all along?)

Farrah then moves on from potential personal grudge matches and tosses out Ridiculousness co-host and rapper Chanel West Coast as a potential sparring opponent. Farrah looks at her daughter Sophia for ideas and Sophia shouts out “Kim Kardashian!” Farrah likes the suggestion and adds Paris Hilton to the list.

So who would you like to see Farrah box? I’m certain Amber Portwood would be at the top of most fans’ lists! And you know that her mom Debra Danielsen is already calling Damon Feldman in hopes of throwing her Debz OG hat in the ring! I think a match with Drita would be fun, but I’m fearful that Drita might actually hurt Farrah.

We will certainly keep our eyes and ears out and update as soon as Farrah’s opponent is announced.