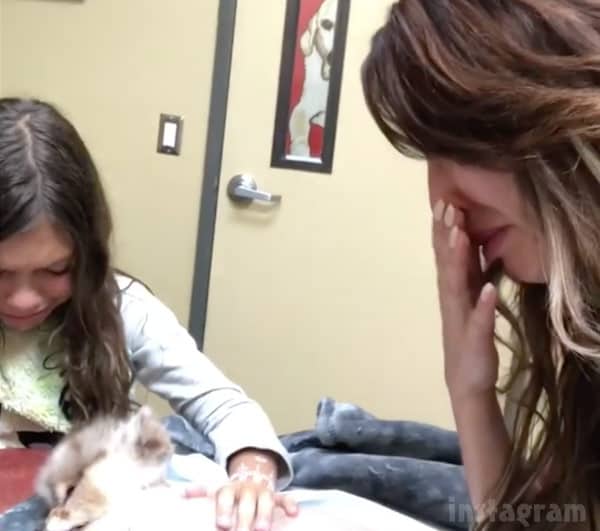 Former Teen Mom star Farrah Abraham shared some very sad news with her fans last night as her and daughter Sophia’s five-year-old Pomeranian Blue passed away unexpectedly. Farrah shared the news in a lengthy written post as well as an emotional selfie video of her and Sophia with Blue after he passed away.

“We lost a best friend, a little brother to my daughter & most adorable Pomeranian BLUE,” Farrah wrote. “I remember like yesterday bringing him home to Sophia from Florida and having Blue in our lives for 5 years now brought such a sense of love, support, relief, joy, fun & so much more I’ll be grateful for the rest of my life.”

It is assumed that Blue was just a puppy when Farrah got him, which would mean that he was only five when he passed away.

Farrah reveals that she plans to take steps to always have Blue around, even after his passing. “I always said if he ever passed I would stuff him and put him on my shelf so I hope for our memory of our best friend BLUE to be brought back home soon again thanks to pet taxidermy.”

Here is the emotional video with Farrah, Sophia, and Blue followed by Farrah’s full post:

7/18/2018 I had to share this as this doesn’t even seem real tonight we lost a best friend,a little brother to my daughter & most adorable Pomeranian BLUE, I remember like yesterday bringing him home to Sophia from Florida and having Blue in our lives for 5 years now brought such a sense of love, support, relief, joy, fun & so much more I’ll be grateful for the rest of my life. As a single mom this little guy has been my right hand man through everything and you all have shown so much love to BLUE over the years that’s it’s surreal we are even having to say he passed away tonight at around 8:35pm after being put down around his dog door to go out to potty on his balcony and literally no noise! no signs! and Sophia sees him just stop moving and she try’s to figure out what is going on & yells for me I’m in disbelief and she hands me my half limp Blue -thinking low sugar, we grab syrup and water, his eyes looking at me as if he’s talking but his tongue can’t move and his body can’t but I see in his eyes he loves seeing his water and food and light of all the food and I feel his heart beating and we’re giving him love but as his body goes limper we call the Emergencey vet and rush to the Emergencey hospital and no heart beat found was found- were incredibly blessed to of had one of the cutest most best friends in the world with Blue he’s is a little star ? and forever will be in our hearts. I always said if he ever passed I would stuff him and put him on my shelf so I hope for our memory of our best friend BLUE to be brought back home soon again thanks to pet taxidermy, We love and cherish BLUE and learn so much from our dog passing away , with out a sound BLUE forever loved. I’m very proud of Sophia saying her good byes and loving her best friend and little brother so much – from tag, to sleeping together the memories melt my heart . Loosing your family’s best friend is awful and Sophia & I have had many firsts but I never thought a first like this would ever happen.♥️ #RIPBLUE

I miss blue super super much?but he is in good hands now in doggy heaven, he went in to shock and then 30 seconds later he past away the emergency room note said the little doggy was found with no heart beat. I miss him so so so much and he was my favorite dog and I always played tag with him and I’d always give him love and his kong and he’d go crazy over it. I miss you blue very very much! ❤️❤️❤️?

Sophia also posted the following on Music.ly: “I was getting Blue to go outside and my only choice was to toss him outside. And then I did but then he went into shock and 30 seconds later he passed with no heart beat.”

RIP Blue … you will always be missed …. thank you for the joy, love, and protection you gave to Farrah and Sophia. Please God comfort our family and friends as we mourn our little guy and forgive those haters below that can’t be kind for Sophia’s sake…

Blue’s passing comes just two days after Farrah made headlines orchestrating a prank in which she dared Sophia and her friends to tell another friend that her dog had died as a joke. After coming under fire for the since-deleted Snapchat clip, Farrah explained to Radar Online that the prank was part of Sophia’s new web series called Kids Dare. “It’s like a mix between Punk’d and America’s Funniest Home Videos,” she revealed. Hopefully Blue’s passing will have Farrah rethinking that kind of “pranking.”

As a tribute to Blue, we’ve compiled a series of photos and videos of his rather adventurous life with Farrah and Sophia over the last few years — accompanied by LeAnn Rimes:

like a girl boss she is going shopping @sophialabraham at @kitsonla @kitsonkitrosslosangeles & ofcourse blue had to tag a long ???

Download my mamas new app! Her new app is called Farrah Abraham and it is so cool! Go check it out! @farrah__abraham #farrahabraham #sophiaabraham #blue

Check out this wonderful children’s book . Disable your limits! www.Disablethebrand.com

WERE READY FOR SANTA!!#merrychristmas from santa's raindeer & elves ??❤️?☃? 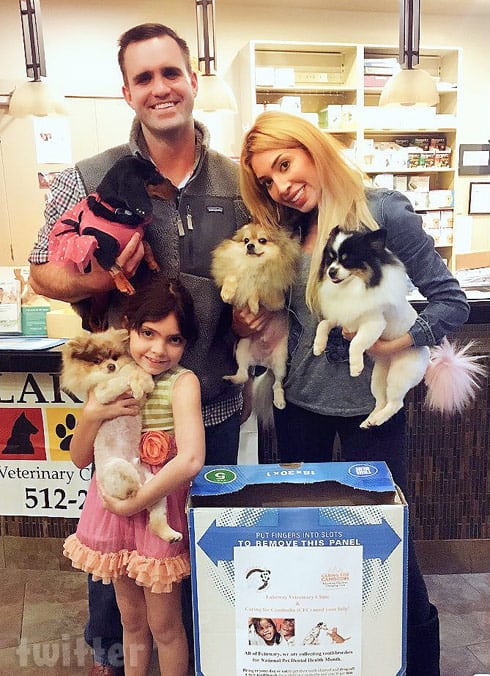 VIDEO Maci Bookout is coming back to MTV… as a host!