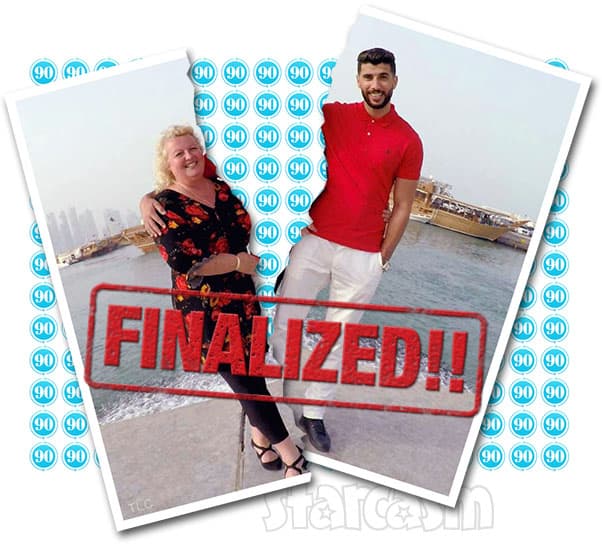 Congratulations are in order for 90 Day Fiance: The Other Way stars Laura and Aladin Jallali as the acrimonious couple’s split is finally official!

Laura made the reveal during an appearance on The Domenick Nati Show on Thursday. (Full video included below.) “What is your current relationship status with Aladin right now?” Domenick asks at the very beginning of the interview.

“My current relationship status with Aladin is we are officially divorced as of 12PM our time,” Laura says, nearly breaking into song.

“So I am now single. If any men who wanna put a ring on it, I will judge the diamond size and the quality,” she continues, showing off her ringless finger. “But yeah, totally. Come on, DM me. Show me the ring. Let’s get jiggy with it.”

Domenick seems astonished and asks her to confirm that they are in fact legally divorced. “I am officially divorced as of 12PM Eastern Standard time,” Laura iterates. “I am a single lady. It’s over. See ya later. Thanks for the ride. Hasta la vista, baby.”

When asked about the specifics of the divorce settlement, Laura says that she had to have a friend translate the document, which was in Arabic. The friend told her that it states Aladin must pay her $30 a month. Laura says the $30 dollar payment “didn’t happen” and adds that Aladin “can keep his thirty bucks. I think he needs it more than me.”

Domenick moves on to some of the salacious details about the couple’s sex life that Laura has been so infamously open about. He asks if her claims to have never had an orgasm while with Aladin were true.

“Let the record show: I never had a real one, but I was a really good actress during the two minutes it lasted,” Laura replies.

After an awkward back and forth about fake orgasms, Laura confirms that she has not had sex in two years. “Yeah, it’s been a long time,” she says. “I’ve got cobwebs growing down there.”

Laura says she does have a new man in her life named Tony, but the two have not yet met in person. (She doesn’t say whether or not he has appeared on Love After Lockup.)

A graphic photo of #90DayFiance #TheOtherWay star Laura Jallali with a black eye has surfaced online, as well as some alleged text messages in which she claims that Aladin is gay! Plus, we have A LOT more information about her past! https://t.co/nP4xOuwKs8

Domenick then presses Laura on getting some details on Aladin’s lil Coltee. “Aladin was quite nice, I must say. Yeah, he had a pretty one…a nice shape, nice length. But, he just didn’t know how to use it. That was my problem.”

“It’s a really good question, and I had to think long and hard over this one. Definitely Geoffrey has the physique. I like his personality, actually. I think he’s very outgoing. He’s like me — he’s got a sense of craziness. He’s cute. he’s handsome.”

Domenick asks Laura if she is aware of the legal issues Geoffrey has been going through since his domestic assault and kidnapping arrest more than a year ago, which includes multiple custody battles for his younger children. He also asks if she and Geoffrey still talk.

As far as Geoffrey’s legal issues, Laura is sympathetic. “I feel bad for Geoff because, unfortunately, he is being pre-judged way too quickly. Just let the court system do their thing before you can judge the guy. Like, just chill on him.”

Laura goes on to say more nice things about Geoffrey, and makes sure to point out that he does appear to have custody of two of his kids at least:

The things that I see of him, he’s a pretty decent man. He’s got a really good heart, and oh my god, he loves his babies — which is very attractive about a man to a woman is when you see how much they care for their children. I mean, he has custody of two of his children, so this guy can’t be that bad, you know? I think that’s a real man that takes custody of his kids and raises them. That’s a real manly thing and very attractive to a woman — to see somebody who’s that responsible.

Laura later reveals in the interview that Aladin was inundated with messages from women, and he was engaged just six months after they recorded the Tell All special.

When asked if fans will be seeing Laura on a 90 Day Fiance show in the future, she says that she has been approached. She also says that she would be more than willing to be on Pillow Talk. “They might have to censor it, but I’ll be there!” Laura laughs. She then invites Domenick to appear on the show with her. He seems willing, as long as they allow cigar smoking.

At the very end of the clip, Laura reveals that she received a death threat from a blogger on the same night that her co-stars Tom Brooks and Ashley Martson received one. The interview cuts off before we get any more details on that.

Here’s the full interview with Laura Jallali on The Domenick Nati Show: