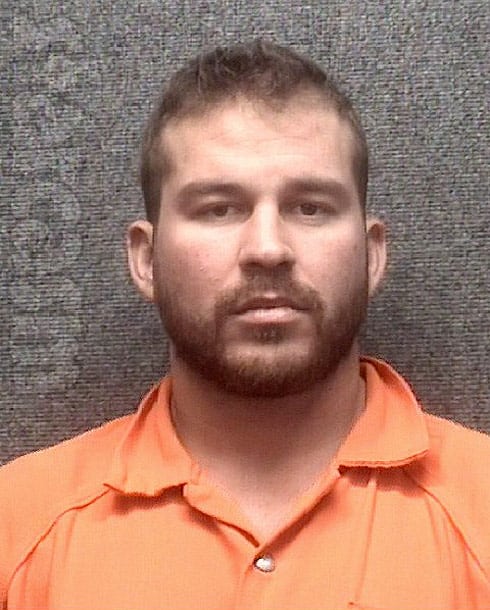 Nathan Griffith is quickly closing the gap with his ex Jenelle Evans as far as the size of their mug shot collections go! Nathan’s latest pose in front of the booking camera comes after he was transferred to the Myrtle Beach jail where he will reside until he faces a judge tomorrow about his pending domestic violence charges against his new ex (I assume) Jessica Henry.

In case you missed it, a warrant was issued for Nathan’s arrest on Monday after he allegedly choked Jessica during a heated argument. Nathan was later picked up by police after he was found in possession of alcohol while riding in a vehicle before then lying to officers about his identity. (Click here for details from the arrest report, which says there were three bottles of vodka found in the vehicle, although two of them were “mini bottles.”)

Amazingly, all of this seemed to be foretold by Jenelle, who has been on social media defending her decision to keep her son Kaiser away from his father Nathan based on concerns for Kaiser’s safety. She even argued that it would be bad if Nathan got arrested while taking care of Kaiser.

As you probably guessed, Nathan’s arrest(s) will all but certainly be a boon to Jenelle in her custody battle over Kaiser — not that it will matter too much if Nathan gets an extended prison sentence.

UPDATE – Nathan has since gotten out and he has shared his side of the story — and it’s quite the epic tale! Click here for the details!