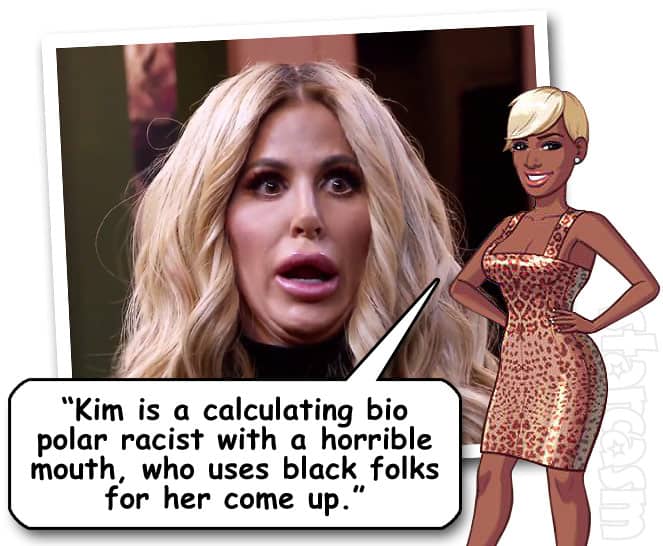 The Real Housewives of Atlanta is currently filming its tenth season as the show welcomes back OG cast member Kim Zolciak Biermann. Actually, Kim isn’t receiving much of a welcome — especially from her on-again, off-again arch nemesis NeNe Leakes!

NeNe was headed back to the ATL from a trip to Barcelona with the rest of the RHOA ladies (sans Kim and Kenya — more on that in a minute) when she shared this Instagram photo and caption:

In case you were wondering what NeNe was referencing when she mentioned her “ROACH infested brand new home,” she answered that question a little later by sharing a video posted by Kim’s 20-year-old daughter Brielle Biermann:

The brief clip was shot inside NeNe’s bathroom during her White Party earlier this summer. NeNe included this no-holds-barred wig-pulling caption:

@briellebiermann We don’t have roaches! If you found 1, u brought it with u or it fell outta yo funky p*ssy! Please know I will get You all the way together when you start f**king wit me and mine! Go somewhere and let the air outta those fake lips, fake titties and fake ass because you will never be @kylejenner Yo trashy mama should have taught you better! My home is Brand New but you guys were so jealous of it, you couldn’t even give a compliment. You had to stoop so low and be so disgusting #racisttrash #jealous #KKK #thirsty you better run yo ass back to a child’s place #youwannaactgrown?

A fan attempted to call out NeNe Leakes for her seemingly wishy-washy love/hate relationship with Kim over the years. “Nene always picking and choosing when she wants Kim to be her Bestie and when she wants her to be Racist/Prejudice,” she wrote. “If she’s all that then why do you keep making up with and becoming friends with her. Just take it back to the Target Parking Lot and be DONE with it. 911 Style! ??”

NeNe begged to differ with her responses:

You are completely WRONG! I’ve always chosen for Kim to stay her distance. Hey & Bye really works for me! I’m the 1 that chose NOT to dia [sic] how with her! She is a racist but you can call it whatever you want

Kim & her daughter oops whole family are racists! What her daughter did at my home, (which she nor kim were invited to so be clear abt that as well) was pure disgusting, racist, learned behavior etc. children are NOT off limits when you allow your child to talk to adults any kind of way, post disrespectful things on social media and so on. Kim is a calculating bio polar racist with a horrible mouth, who uses black folks for her come up.

BLOOP! BLOOP! BLOOP! I’m guessing NeNe meant bipolar, but “bio polar” sounds even worse! Oh, and so THAT’S what happened to that NeNe Leakes and Kim Zolciak spin-off road trip reality show that never happened! (I hope they started filming and there is footage out there of the two of them in a car BLOWING UP at each other and ending the series prematurely.)

Speaking of which, here’s our Photoshopped ode to their ill-fated show that seems more appropriate now than when we created it years ago: 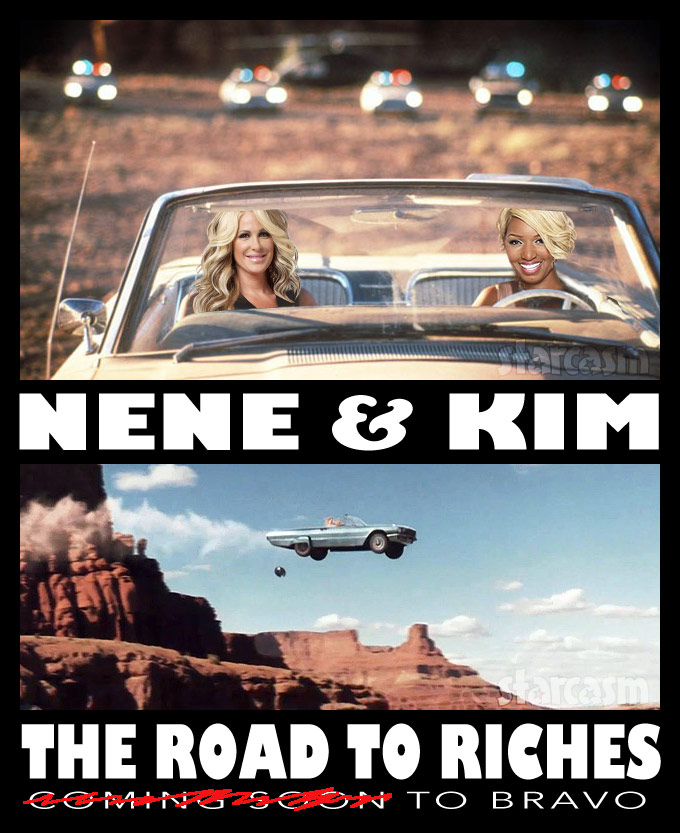 In addition to the Brielle video above, the “roach” thing was also reportedly brought up by Kim in a text message sent to the rest of the cast members stemming from her not attending the Barcelona trip. From RHOA guru blogger Michelle at Straight From the A:

Kim apparently demanded that she be allowed to bring Kroy to Barcelona. I’m sure that didn’t sit well with Nene and Kandi, who probably wanted to bring their husbands as well. Kim even tried to cite her health and the fact that she once had a ‘stroke’ as the reason Kroy needed to be in Barcelona with her…

I’ve been told that Nene brought up Kim’s previous fake brushes with death, and threw some shade about her always having some sort of health crisis. Kim then clapped back with a group text to the the ladies, stating that Nene is insensitive and lives in a “roach nest’. *sigh*

UPDATE – NeNe has added this message, revealing that the message sent to the cast included Brielle’s video:

SWIPE: my cast @cynthiabailey10 @kandi @porsha4real @marlohampton @shereewhitfield all know I'm telling the TRUTH abt how they got the video. @shereewhitfield invited Kim as her plus 1. The rest of her family wasn't invited at all. They all can tell you except Porsha & Kandi that I was overly kind to her and everyone that attend my party

I have to admit, NeNe’s anger seems a bit above and beyond the usual on-screen sassiness for ratings. It should be quite entertaining to see these two go at each other this season! Stay tuned…

UPDATE – Kim has since responded, saying that NeNe’s “slanderous comments” have “absolutely no credibility.” Click the link for the rest of what Kim had to say, including her take on the whole “roach” video fiasco.