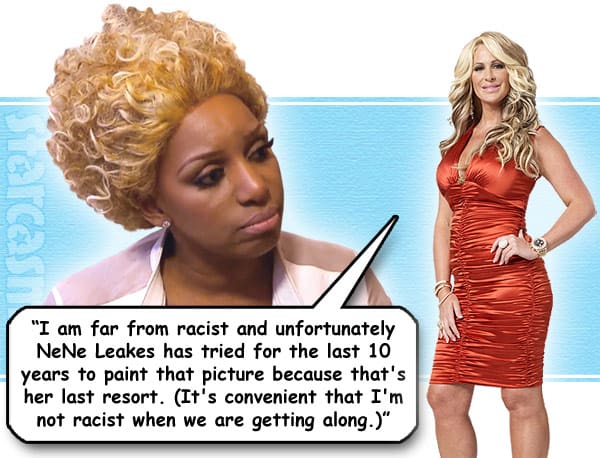 As we JUST reported, The Real Housewives of Atlanta‘s NeNe Leakes WENT OFF on her co-star Kim Zolciak Biermann in a series of posts on Instagram in which she calls Kim and her 20-year-old daughter Brielle racist (among many other things). Kim has since responded to NeNe’s outbursts on her own Instagram account with lengthy statements claiming the “slanderous comments” have “absolutely no credibility.”

It’s so sad and offensive that someone can stoop so low as to call someone a racist just because they are mad. Everyone in my life knows that I am far from racist and unfortunately NeNe Leakes has tried for the last 10 years to paint that picture because that’s her last resort. (It’s convenient that I’m not racist when we are getting along.) In a day and age where racism is very much alive and people are actually dying because of real racists, it’s heartbreaking that NeNe would cry wolf like this only because she’s upset. I think everyone including Nene needs to spend some time uplifting people instead of tearing them down. Nene should be embracing love instead of making up lies. There is absolutely no credibility to anything that she has said. I will NOT stand for these slanderous comments!

Kim posted the above as a text graphic on Instagram, and she captioned it by adding: “At this point I almost feel sad for you @neneleakes I had hoped for many yrs you would have seen the bigger picture but it’s evident you haven’t, I will continue to pray for you.”

First off that video is a combination of 2 videos! I COMBINED THEM! Brielle posted the first video on snap unaware of the large bug in front of her when she was kneeling down .. until her DM’s blew up! She removed the video immediately!! I was filming as an INVITED guest at @neneleakes for RHOA!! Brielle was invited as well! Brielle went to the bathroom and saw several bugs and had sent ME the video on snap and NO ONE ELSE!!! We ARE filming a show, remember that, (RHOA) and Nene released this video herself! No one has EVER seen this video but RHOA! Nobody would have ever seen this video! Nene has said and done some things that are absolutely disgusting, however I will take the high road as you will see it on the show soon enough, but you WILL NOT make it seem as though my daughter did ANYTHING wrong! She never posted this video nor would she! As you see here I myself was not willing to send the video just for ratings for RHOA. END OF STORY

Here is the text message conversation Kim included with the post: 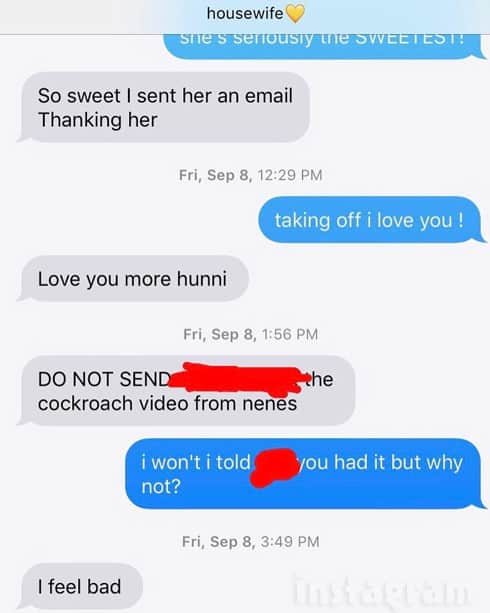 In case you missed it, NeNe claims that Kim and Brielle were not invited to the White Party and that Kim came as Sheree’s plus one. NeNe also claims that Kim sent the video to some of their RHOA co-stars while they were vacationing in Barcelona together (without Kim).

Kim Zolciak is the one that sent the video to Cynthia, Sheree, Marlo, Porsha and Kandi while we were filming in Spain. Now she has the nerve to make a pitty post! No one from Kim’s household was invited to my white party. Kim came as Sheree’s plus 1. She is a huge lier. All this season I have done nothing but try an be kind to her even when she said disrespectful things to me and broke glasses in my home. I STILL continue to be kind to her but this calculated video that was shot in my home durina a time when we had no problems shows how low she will really go! Then she turns around an try to get the fans on her side of this sh!t #trash

SWIPE: my cast @cynthiabailey10 @kandi @porsha4real @marlohampton @shereewhitfield all know I’m telling the TRUTH abt how they got the video. @shereewhitfield invited Kim as her plus 1. The rest of her family wasn’t invited at all. They all can tell you except Porsha & Kandi that I was overly kind to her and everyone that attend my party

As far as the “roach” video itself, here that is — courtesy of NeNe Leakes:

@briellebiermann We don't have roaches! If you found 1, u brought it with u or it fell outta yo funky pussy! Please know I will get You all the way together when you start fucking wit me and mine! Go somewhere and let the air outta those fake lips, fake titties and fake ass because you will never be @kylejenner Yo trashy mama should have taught you better! My home is Brand New but you guys were so jealous of it, you couldn't even give a compliment. You had to stoop so low and be so disgusting #racisttrash #jealous #KKK #thirsty you better run yo ass back to a child's place #youwannaactgrown?

Meanwhile, Kim is scheduled to be on Watch What Happens: Live! tonight, and I think we all know what the call-in questions will be about (if Andy doesn’t address it before then).

Porsha Williams and Vivica A. Fox respond to Kenya Moore’s boyfriend getting married