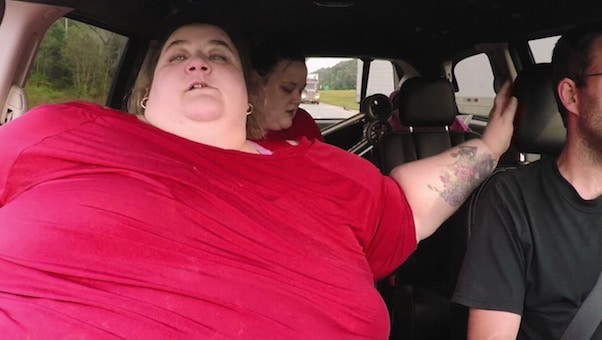 Angela Johns was maybe the most controversial My 600 Lb Life Season 7 cast member, and it doesn’t look like that controversy will die down now that her episode has aired. Holly Hager and Jeanne Covey both earned plenty of viewer ire this year, but Angela, with her argumentative ways and positive toxicology report, appears to have surpassed both of them. And, as the latest My 600 Lb Life Angie J update makes clear, Angie is now claiming she’s lost enough weight on her own to have been approved for weight loss surgery since filming for her episode concluded.

Angie was adversarial in her My 600 Lb Life debut

My 600 Lb Life participants are often combative, especially in the early stages of a weight loss journey. But Angie’s attitude seemed to stand out. She said Dr. Nowzaradan was “punishing” her with his weight loss goals, and called his weight loss program “bullsh!t.” Angie also called her husband “a loser” and “pathetic” when he wouldn’t go to the store for her, and regularly berated Desiree, her daughter and primary caregiver.

Of course, Angie’s back story was as horrifying as anything we’ve heard on My 600 Lb Life. As a girl, she was molested by a family friend; when Angie told her drug-addicted mother, she was brushed off. Then, at thirteen, Angie was raped by a 27-year-old, in what she called her “first relationship.” Angie gave birth as a result of the rape, and gave her baby away.

Angie’s peak weight of 643 pounds was cause enough for concern, but Dr. Now was later troubled to note Angie’s drug use. At one point, he told her he could tell she was on drugs just from her voice on the telephone. And the toxicology test he ordered proved Dr. Now right: Angie’s test came back positive for marijuana use, along with heavy cigarette smoking.

Unfortunately, this all proved too much to bear. Angie did lose weight during her episode, but still weighed 595 pounds after twelve months, for a total loss of 48 pounds.

Before we get into Angie’s latest claims, it’s probably worth pointing out that the deck of public opinion is already well stacked against her. Our first article on Angie got more negative comments than any My 600 Lb Life cast member in recent memory.

Nor were viewers any gentler on the show’s official Facebook page. “OMG! Go home and leave Dr Now to tend to willing participants that would be more grateful for the free help,” one person wrote. Another said, “22 mins in, and I want to smack her. Good lord, lady.” And still another person got hundreds of likes for writing, “This is the single most horrible person I’ve ever seen on this show.”

Now: as we wrote in an earlier My 600 Lb Life Angie J update, she actually started a GoFundMe a couple of months before her episode aired. With her first update to that fundraiser, Angie wrote that she’d “lost 40lbs on my own by following my diet instructed to me by the Dr.,” though, now that her episode has aired, it’s not clear if Angie was referring to the 48 pounds she lost in her first twelve months, or if she was saying she’d lost a further 40 pounds since then.

The day after her episode premiered, Angie has offered a second update to her GoFundMe. In it, she makes several big claims: First, that her husband Justin abandoned her in Houston; second, that her house was robbed the day before Justin did so; and third, that she’s actually been approved for surgery since the last update. Oh — and that she’s filming a Where Are They Now? episode as we speak.

You can see the fundraiser here. Below is the most recent My 600 Lb Life Angie J update, from the woman herself:

i have been here in Texas now for over a month as you have seen in my episode. A week ago my husband decided this wasnt for him and he left! leaving me here in an apartment i cant afford all by myself living in a state i know NO ONE! I was burglarized in my home on April 30th and Justin left on May 1st. i have been thru the mudd i dont need no extra negativity because thru this all IM STILL HERE TRYING! I finally got approved for my surgery! im doing the 2nd episode now! i am finiding myself i just need a little help for a moment! im trying to stay here to finish what i started! so anything will help! im 128$ short on my rent thats with giving my whole income up! that leaves me with nothing which is fine as long as i can live here til im done!!! thanks in advance ♡ god bless you all!

Finally, Angie appeared to back up her claim about filming a follow-up in a comment on another platform. “Love you,” Angie wrote, at the end of a Facebook exchange with Desiree. “Gottta go to bed drs tomorrow and filming ♡.”

If you missed the first airing Angie J’s story, you can stream the episode in its entirety here, via TLC.

British Medical Journal: More than half of Dr. Oz’s advice is wrong or baseless

Nicole Kidman owns up to Botox