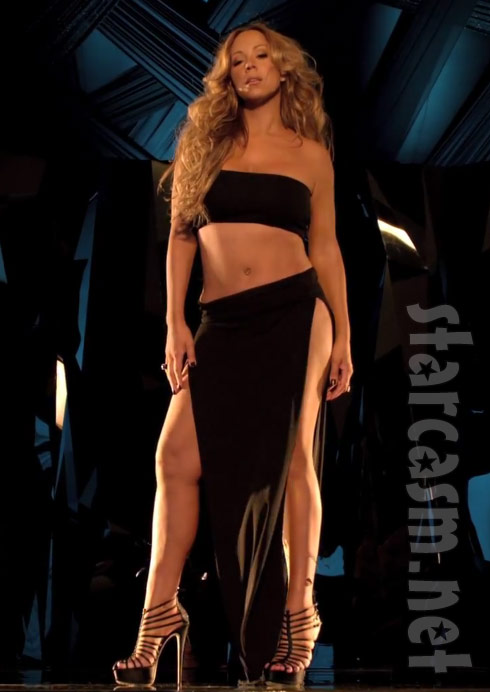 The greatest selling female artist in music history, Mariah Carey, made a big splash via the The Rosie Show displaying an impressive post twin-baby body. She sat down with Rosie and revealed that she has dropped an amazing 70lbs after being just 6 months out from having given birth to twins Moroccan and Monroe.

Mariah, who is married to America’s Got Talent host Nick Cannon, told Rosie that she really struggled with water retention and swelling:

“In the beginning, when I first had the babies, I had so much edema … water and swelling. Most pregnant woman have that just in their feet. One day I was doing my thank-you notes and I noticed it started rising up the leg, so I had edema. … I didn’t think I would ever be the same person.”

In the first week Mariah explained that she lost 40lbs in just water weight alone. Following that she started with a strict Jenny Craig diet and has since lost another 30lbs. She is now a spokeswoman for the company and her first ad is certainly eye catching:

Carey wanted to point out that her appearance and her work with Jenny Craig was not about weight loss primarily but more about health. She had a difficult pregnancy, being subjected to bed rest and even that hurt. Simple tasks such as going to the bathroom were even a chore for the multi-platinum diva.

“The whole point of this is not just like: ‘Oh, hey, look at me and my weight loss, I’m fantastic.’ It’s really health.”

I’m blown away by Mariah’s post baby reveal but then again as a dude the fact that any woman survives pregnancy blows my mind. I’d never make it, I can tell you that much.

Congrats to Mariah on her health and to the fact that she is about to dominate the holiday airwaves with a redo of her classic “All I Want For Christmas” with Justin Bieber. I won’t even venture a guess as to how many YouTube views that is going to rack up!