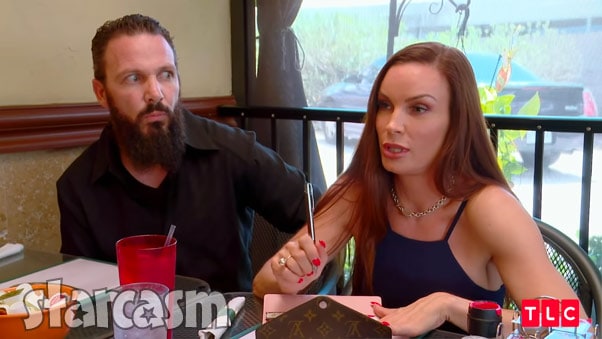 On the most recent episode of 90 Day Fiance, Bryson’s “p0rn granny” Stephanie Woodcock and her husband Benjamin had lunch with Robert and Anny for what was supposed to be a potential peace-making event. However, any potential for peace went up in smoke when Stephanie busted out a checkbook and offered Anny $15,000 to help pay for her return trip to the Dominican Republic! Stephanie later claimed on Instagram that the whole scene was staged by producers, and judging from court records regarding Stephanie’s past financial issues, it does seem extremely unlikely that she has fifteen grand to be throwing around.

First, we will address Stephanie’s comments about the scene. After the episode aired, there was a lot of negativity directed at Stephanie for trying to pay Anny off, and she responded with a text graphic in her Instagram story with the following message in all caps:

IT’S F**KING TV PEOPLE. TV!!! IT’S FAKE. IT’S SCRIPTED. I HAD TO BORROW A CHECKBOOK BECAUSE THE PRODUCERS ASKED ME TO DO THIS. I HAVE SCREENSHOTS TO PROVE THIS.

Anny would later respond to a fan’s question by stating that the scene wasn’t fake. Of course, if producers did indeed come up with the idea, they probably wouldn’t have told Anny about it in order to get an authentic reaction — which they got.

90 Day Fiance producers being heavy handed in scripting controversial scenes is nothing new, and neither is secondary cast members speaking out about it. Dedicated fans will probably recall David Toborowsky‘s pal Chris Thieneman revealing that the controversial scene in which he asked Annie for Thai massages in exchange for lodging was allegedly the director’s idea.

Seemingly lending credence to Stephanie’s claim about production fakery are court records that indicate that she and husband Benjamin have had some rather major financial issues over the years. In September of 2012, American Express Centurion Bank sued Stephanie for an outstanding credit card balance of $29,212.66. The balance actually went above $30,000 before Stephanie made her last auto payment (at the time of the filing) of $1,420 in March of 2012.

The bank received a default judgment in their favor in April of 2013 and they named Wells Fargo Bank as a potential garnishee. From the filing:

Plaintiff does not believe that Defendant(s) has in Defendant possession visible property upon which a levy can be made sufficient to satisfy the judgment and moves for issuance of a Writ of Garnishment as to Defendant, Stephanie P. Woodcock, and suggests Wells Fargo Bank, NA, as garnishee.

It’s unclear why Wells Fargo was named as a potential garnishee, but I assume it was because American Express believed Stephanie had a mortgage or something similar with the bank. However, Wells Fargo later responded and revealed they were not indebted to Stephanie in any way and they had “no other deposit, account or tangible or intangible personal property of Defendant(s) in its possession or control at the time of this Answer, and knows of no other person indebted to the Defendant(s) or who may have any of the effects of the Defendant(s).”

Stephanie and her husband Benjamin purchased a house in July of 2004 with a mortgage of $529,000 that looks to have been connected to Wells Fargo. However, they sold the house the following year. The couple listed a Texas address at the time they sold the house, and I have not looked into Texas court records on the two yet.

America Express collectors weren’t the only ones wishing they could have lunch with Stephanie and her checkbook in hopes of getting their money back! The Internal Revenue Service took out multiple tax liens against Stephanie and Benjamin for alleged unpaid taxes over the past ten years.

It’s unclear how much (if any) of the tax debt has been paid off.

Despite all of their financial issues, it appears as though the Woodcocks have managed to get their credit score to a respectable number because they were able to purchase a Florida townhouse in January of last year. The two secured a mortgage in December of 2018 for substantially less than their 2004 mortgage. When they completed the purchase of the home in January, they added a second mortgage that was 25% of the first amount. (I do not know enough about real estate to know if waffling a bit on mortgage amounts is common practice.)

If you want to help Stephanie avoid any future financial issues, then grab your checkbook and head over to her Only Fans account for what I assume is some VERY not-safe-for-work content! Unfortunately, I cannot link directly to the page due to our advertisers, but you can get there from Stephanie’s (aka Diamond Foxxx’s) Instagram bio link.

90 DAY FIANCE Azan’s alleged Spanish girlfriend tells all: calls him a liar, a cheat, and a con artist