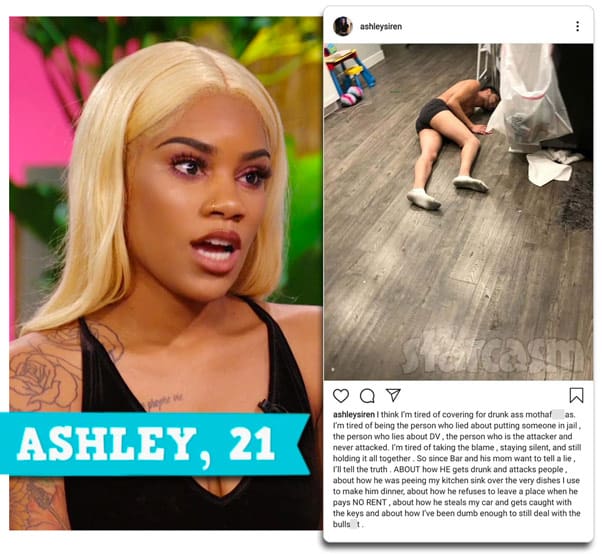 While other cast members and producers from Teen Mom: Young and Pregnant were posting a text graphic begging people to tune in, Ashley Jones shook her damn head and told them all to hold her beer as she went about drumming up ratings the old fashioned way! Actually, it was more like she said: “Hold Bar’s beer.”

She continued by expressing her exasperation at being made out to be the bad guy, or gal, in the relationship. “I’m tired of being the person who lied about putting someone in jail, the person who lies about DV, the person who is the attacker and never attacked,” Ashley wrote, obviously referencing in part the backlash she received after posting a video in which she slapped herself and then accused Bar of beating her. “I’m tired of taking the blame, staying silent, and still holding it all together.”

Ashley then moved on to the most recent drama between her and Bar’s mother Shen after Bar’s arrest for domestic assault last month. Shen claimed that Ashley was driving while intoxicated and Bar tried to take her keys. That set off a chain of events that resulted in his arrest. Shen says the charges against him were later dropped.

“So since Bar and his mom want to tell a lie, I’ll tell the truth,” Ashley preached. “ABOUT how HE gets drunk and attacks people, about how he was peeing my kitchen sink over the very dishes I use to make him dinner, about how he refuses to leave a place when he pays NO RENT, about how he steals my car and gets caught with the keys and about how I’ve been dumb enough to still deal with the bullsh*t.”

UPDATE – Since publishing the post, I ran across other screen shots of Ashley’s caption that included more text. Here’s the rest of the caption, picking up right after bullsh*t:

…and about how I’m dumb enough to make excuses for him. DON’T SAY SH*T TO ME. THE REASON IM POSTING THIS IS THE SAME REASON HIM AND HIS MOMMA WANNA TELL THE WORLD IM A LIAR, ? imagine that sh*t

Ashley’s comments about Bar’s unorthodox urination tactics and inability to secure funds for lodging seem to confirm Shen’s claim that the two of them recently moved back in together.

Bar could do nothing but shake his own head, sigh, and laugh in admiration at Ashley’s impressive blog baiting skills. He posted a brief video to his Instagram story in which we are treated to his viewpoint as he literally shakes his damn head from side to side. “What a f**kin day,” he wrote.

Ni**as better mind they business ? BM beeeeen spilled the beans on EVERYTHING to me ? better just let me and my baby mama fonk ?

UPDATE – I’m seeing online that Bar may be referencing Ashley’s clout-hopping rapper ex 600 Febrezey with this post? I have no idea. It’s my literal job to keep up and I can’t keep up!

If Teen Mom: Young and Pregnant does end up getting cancelled after this current season, fans certainly won’t be able to accuse Ashley of not trying her best! And the same can be said for newbie Rachel Beaver and her family, although their efforts to promote the show with never-ending, over-the-top social media drama may not have been as intentional or motivated by marketing reasons as Ashley’s.

The proof will be in the pudding as we all wait to see what the ratings are Tuesday night. The series has been in the sink urinal as far as viewership this season, but the show saw a sizable bump last week during Donald Trump’s State of the Union Address. Will they be able to sustain the bump? Stay tuned!