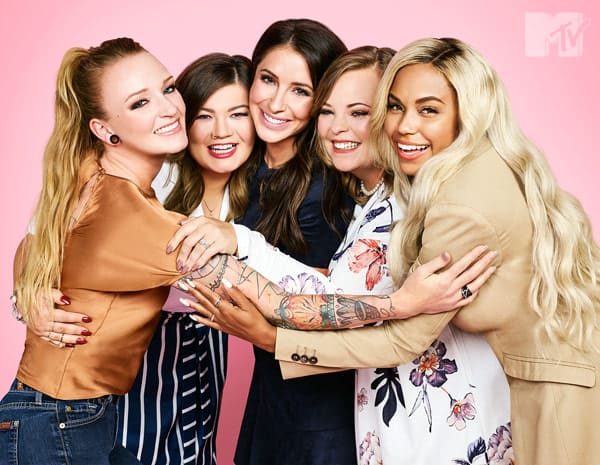 The OGs are coming back! MTV has reportedly renewed Teen Mom OG for yet another season, and production is already under way!

The big news comes from Teen Mom scoopologist The Ashley, who has sources that have confirmed that ALL THE MOMS have signed on to return for the new season. “Everyone has finally signed their contracts, and things are up and running,” a source tells The Ashley.

The italicized “finally” appears to be in reference to actual OG Amber Portwood, who has been very vocal about not wanting to continue doing the show. She even went as far as to blame the show for causing her depression and suicidal thoughts in scenes filmed at the end of the most recent season. Tensions came to a head on screen during the Reunion when Amber confronted producer Larry Musnik about how she is portrayed on the show and the fact that the network was willing to give co-star Catelynn Lowell a month off to get therapy when they only gave her a week.

But, it seems a few weeks off have revitalized the reality star’s desire to continue filming as she reportedly signed on just last week. “She was really the only one who was holding out,” The Ashley’s source says.

Another source spills some additional tea, however, by revealing that the disgruntlement between Amber and producers was completely mutual! “She was literally unbearable to work with,” the source says. “She would refuse to film, or start acting like a giant diva.” The source says that producers plan to be a little less tolerant of Amber’s diva antics this season, which sounds a lot like the hard line they drew with Teen Mom 2 star Jenelle Eason.

In addition to Amber, the other surprising returnee is Bristol Palin. She and her ex-husband Dakota Meyer rarely agree on anything, but their disappointment with MTV was completely mutual.

Dakota was the first to lash out as he took to Twitter to voice his disappointment on December 4. “What’s sad is that Viacom [MTV’s parent company] has turned Teen Mom into a trailer trash Real Housewives instead of showing what the true struggles of parenting are,” he tweeted. “I’ll bring my VLOG back and show you what single parenting looks like since they can’t seem to figure it out.”

Bristol went off on producers a week later, and she used Instagram so she could fully expound on her frustration over how she was edited. “MTV doesn’t want to talk about faith, show work ethic, or juggling three kids alone, they don’t want to show the humble process of starting over after a divorce, building a career, or any real life issues,” Bristol wrote in part. “All they want with my little segment each week is some fake fill-in Farrah Abraham/Jerry Springer BS, and it’s simply not true.” 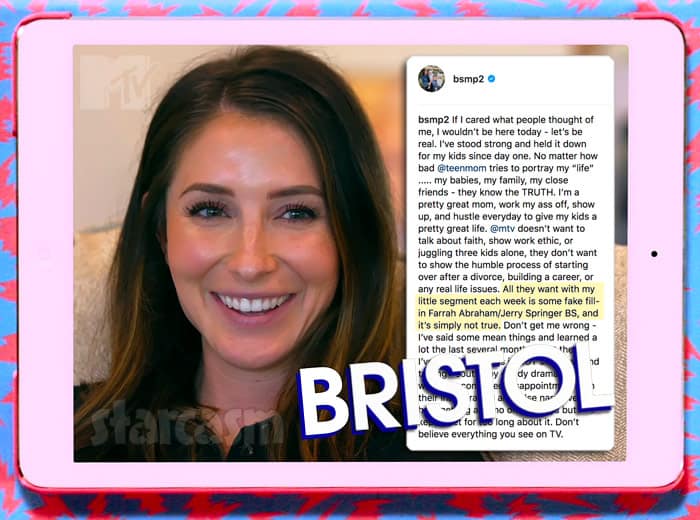 Apparently Bristol either convinced producers to Wonder Womnanify her segments, or else she came to terms with being a “fake fill-in Farrah Abraham” because The Ashley’s source says she “signed on pretty quickly.”

My thoughts on Bristol and Dakota’s complaints from our previous post about her comments:

I completely understand that Bristol and Dakota are upset over feeling as though they were portrayed in a less than favorable light, but I’m not sure what they expected? Did they not watch the last couple seasons of Teen Mom OG? To be honest, I thought their segments this season were the most interesting of all the couples. And even though there wasn’t as much emphasis as Bristol apparently hoped for, I definitely saw “work ethic,” “juggling three kids alone,” and “the humble process of starting over after a divorce” as part of her story.

Maci McKinney, Catelynn Baltierra, and Cheyenne Floyd will all be back as well, but aside from the potential of Cheyenne not getting an invite from the network, there are no real surprises there.

One big question that remains, even for The Ashley, is whether or not Ryan Edwards will be back on the show next season. As fans are aware, he was booted from the show after Maci reportedly insisted that MTV stop filming him until he got his addiction issues under control. Ryan completed a 90-Day rehabilitation stint in November, but it’s unknown if that will be enough for MTV and Maci to allow him back. Of course, it may also be that Ryan will not want to return. I assume that his wife Mackenzie Edwards would sign that contract in a heartbeat, but Ryan might feel different — especially considering that he is embroiled in yet another Tinder controversy that would most likely have to be talked about if he did return.

As you may have guessed, we do not have any sort of premiere date for Teen Mom OG Season 8, but it sounds like mid-late summer of 2019. The Teen Mom OG renewal comes on the heels of a similar announcement that MTV has also renewed it’s newest member of the franchise, Teen Mom: Young and Pregnant.

So, who are you most excited to see return next season? (Not counting the kids of course!)