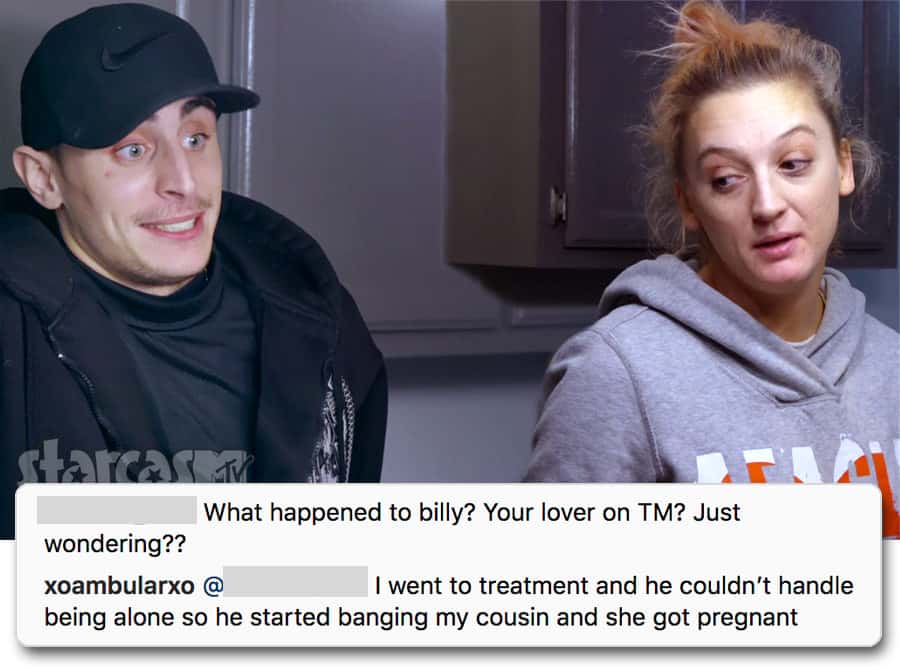 It has been more than six months since Tyler Baltierra’s sister Amber Baltierra broke things off with her husband Billy Elkins and headed off to Austin, Texas for an extended rehab stay to treat her drug addiction and other issues. While Amber has remained sober and focused on her new goals, Billy has apparently followed through on his plan to start a family — with Amber’s cousin?!

This weekend, Amber was asked by a follower on Instagram: “What happened to Billy?” Amber’s response was anything but evasive. “I went to treatment and he couldn’t handle being alone,” she wrote, “so he started banging my cousin and she got pregnant.”

Given that Amber is more than a thousand miles away from Billy, I thought I would do a bit of fact checking on her claim. Sure enough, Billy has a new girlfriend and they are expecting a little boy in early March! (I cannot attest to her familial relation to Amber.)

The mom-to-be made the public announcement at the end of August:

So for friends and family that don’t know, me and [Billy] are sooo happy to announce baby Elkins is going to be here come the new year ??? we are both so happy and have known since like the 2nd week. So it has been such a terrible secret to keep. Glad to finally announce ??

In case you missed it, Billy and Amber reportedly eloped late last year, not long after Billy finished serving time in prison for drug possession and being a felon in possession of a firearm. Billy and Amber shocked family members (and viewers) when they revealed on camera that “we’re trying to have babies.”

It seems their attempts at starting a family together failed, and Billy and Amber broke up VERY publicly back in early May. Here is an excerpt from our recap of the split:

The public aspect of their relationship’s demise reportedly began with Amber posting some extramarital fling shots on Snapchat, which have since been deleted. Meanwhile, Billy was stuck at home on an electronic leash due to his parole stipulations. “It’s time to move forward,” Billy announced on Facebook. “My so called wife is out with another guy and I’m at home on a teather [sic] all I do is go to work and come home idk what girl doesn’t want a guy like that but it time to no look back and put my foot on the ground and just keep it pushing I hate cheaters.”

Amber took to Instagram to share a text graphic expressing her take on things: “currently single and ready to NOT F**KING MINGLE WITH NOBODY CAUSE EVERY DUDE BE ON THAT BULLLLLLLLLLLLLLLLSH*T.”

Billy and his new lady became Facebook official a month later on June 9. According to an online reverse due date calculator, Billy and his gal conceived roughly two days after that on June 11.

In addition to dropping the figurative ball and chain in regards to Amber, Billy also looks to have dropped the almost literal ball and chain in the form of his electronic tether. “Yeah boiiiiiii #free,” he wrote on Facebook on July 30. His excited girlfriend responded in the comments section: “Date nights here we come ?❤️??” 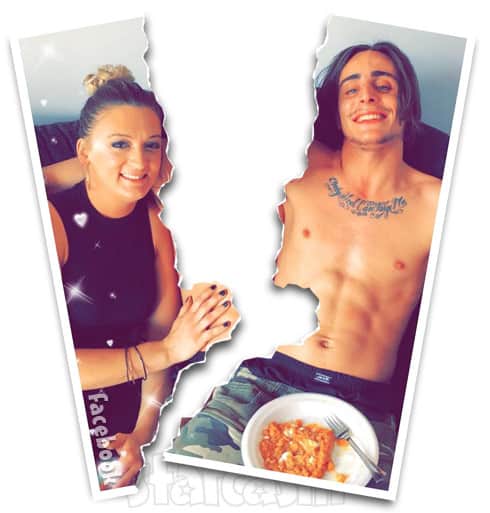 After sharing her update about Billy, Amber responded to some other comments with rumors about her brother Tyler Baltierra before signing off with this lengthy above-the-fray entry:

At the end of the day I know my truth and that’s all that matters. You haters can let your heart be filled with hate and anger I don’t have any room in my recovered mind to rent that kind of stuff. My life means to much to me and I’m worth it ? you won’t take my power. You also won’t leave negative lies that you think is true on my page. It’s crazy how as soon as people hear negative things about someone that believe it right away. But say something positive and good and watch them doubt it. This world can be better and I believe in the universe blessing you with what you put out there. #PostiveVibesOnly.

Looking on the bright side, it does appear that most everyone involved in this story got what they wanted.