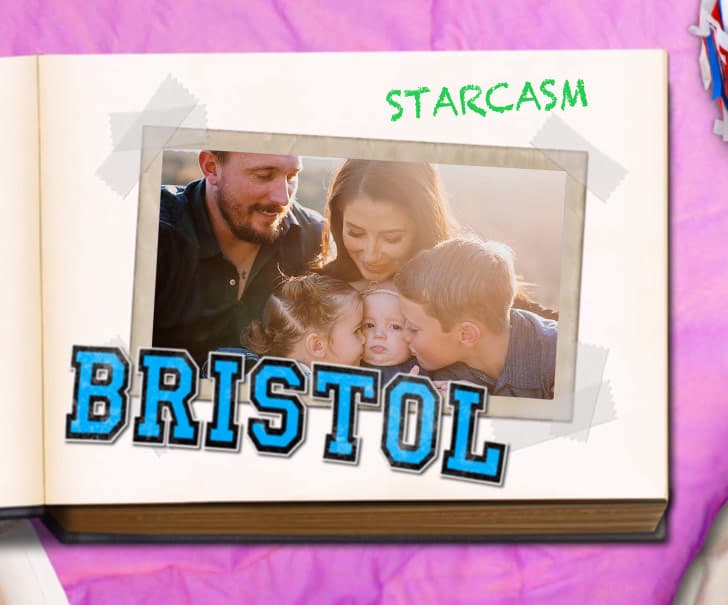 News broke on Thursday that MTV has added Sarah Palin’s daughter Bristol Palin to the cast of Teen Mom OG, joining The Challenge‘s Cheyenne Floyd as the replacements for Farrah Abraham. But why two new moms with only one leaving? According to a new report, it’s because Maci McKinney was refusing to film if MTV was going to continue to feature her ex Ryan Edwards!

The report comes from The Ashley’s Reality Roundup who has a crew source with the scoop. “[Maci] basically told production and crew that she wasn’t going to film if [her son Bentley’s father] Ryan Edwards was filming because she didn’t want his drug struggles to play out on TV anymore,” says the source. “She didn’t want Bentley to be able to watch that go down.”

The Ashley says she first heard the casting news earlier this week, but was waiting to confirm with multiple sources before making the reveal. (TMZ was the first to report the casting news on Thursday, but they erroneously identified Teen Mom 3‘s Mackenzie McKee as one of the new Teen Mom OG additions instead of Cheyenne.)

The Ashley’s source reveals that Bristol has been filming for the last few weeks — and fans haven’t been the only ones kept in the dark. “Amber, Catelynn and Maci did not even know,” the source says. MTV even went so far as to reportedly use code names whenever discussing Bristol so the news wouldn’t leak!

Bristol would have certainly fit right in on Teen Mom OG if she had been a part of the show from the beginning. Can you imagine all that drama with her ex Levi Johnston playing out on MTV?!

Something I had completely forgotten about until I started sifting through Starcasm’s Bristol Palin archives is that Bristol Palin had her own reality series! Titled Bristol Palin: Life’s a Tripp, the show ran for 14 episodes on Lifetime back in 2012. The ratings for the series were pretty bad, due in part to the fact that Lifetime thought it was a good idea to air it at the exact same time as Teen Mom. The reviews for the show were as bad as the ratings, however, and that’s something that cannot be chalked up to a bad time slot.

Neither Bristol nor mom Sarah Palin have responded to the Teen Mom OG news online, but new dad Cory Wharton (father of Cheyenne’s daughter Ryder) got a bit boasty after the news broke as he called the original Teen Mom cast members “boring” in a tweet. OG dad Tyler Baltierra agreed:

Ousted OG Farrah Abraham, who is grieving after the death of her dog Blue Wednesday night, offered up her take on her replacement. “Who cares! Sorry I’m dealing with a family loss right now,” she told Us Weekly. “I don’t care as there’s no replacement for me, as we all know.”

Teen Mom 2 star Kail Lowry also responded to Bristol and Cheyenne being added to the original show in the franchise with the opinion that the new additions will bring in ratings. That opinion was countered by 16 & Pregnant star Nikkole Paulun, and Kail seemed to waiver a bit on her stance: 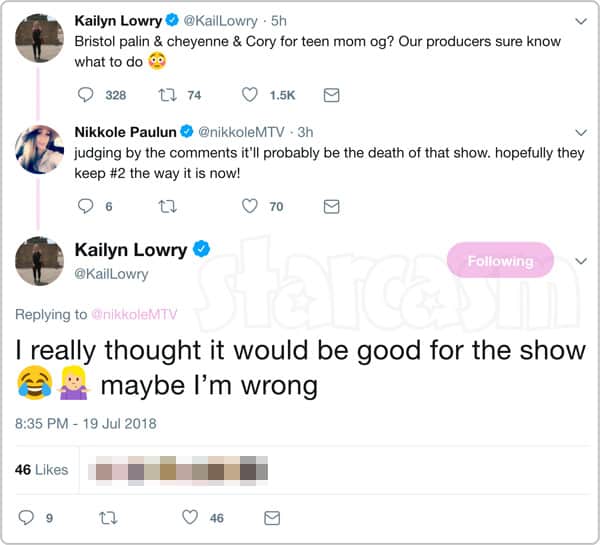 So what do you think? Will the addition of Bristol Palin and Cheyenne Floyd make you more or less likely to tune in?

My knee jerk reaction was disappointment because I hoped that the new additions wouldn’t be famous and already selling weight loss teas on Instagram. But, after giving it some thought, I realize that the contrast between cast members might be too great given how famous the original moms are. I think about the live after shows when they had Teen Mom OG and Teen Mom 2 moms sitting with moms from Teen Mom: Young and Pregnant, and I just don’t think it would work well if they were on the same show. Their lives are just too different.

On a side note, who else cannot wait to see Sarah Palin and Butch hanging out together?!

In addition to not being a stranger to reality TV, Bristol is also no stranger to the cast of Teen Mom OG. Bristol participated in “The Harsh Truth: Teen Moms Tell All” town meeting sponsored by The Candie’s Foundation along with Maci McKinney (then Maci Bookout) and Farrah Abraham in 2010. And, of course, the town hall meeting was moderated by none other than Dr. Drew!

Here are some photos from the event to help get you acclimated to thinking of Bristol Palin as a cast member of Teen Mom OG: