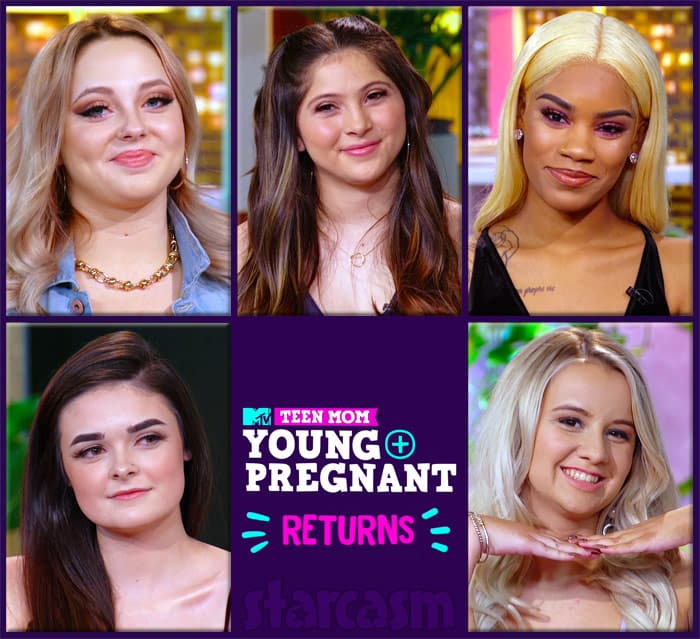 When the cast of Teen Mom: Young and Pregnant finished filming the most recent Reunion special in November, MTV had yet to decide whether or not to renew the youngest member of the Teen Mom franchise for another season. The moms shared their good-byes to each other on social media, as they openly wondered whether or not this would be the last time they would be filming.

It seems that the cast didn’t have to wonder long as The Ashley’s Reality Roundup is reporting that people behind the scenes on the show knew as early as late November that the series had been given a green light for another season! And at least some of the cast members found out soon after because they were filming as early as December!

“They were supposed to start filming in January, but they started early,” The Ashley’s source says of the cast. “Most of the girls have been filming for Season 2 since mid-December.”

Fans of the show might be confused by MTV calling the new episodes Season 2, but that is because the network did that thing where they opted to extend the first season resulting in a Season 1A and season 1B. The divided seasons are certainly confusing for fans, but it allows MTV to film additional episodes without having to renegotiate contracts, so I don’t think they will be changing it any time soon.

So which cast members of Teen Mom: Young and Pregnant will be back for Season 2? All you have to do is head down to a local newsstand and pick up a copy of Sarah Palin’s favorite magazine to find out the answer: All Of Em!

Yes, Ashley Jones, Lexi Tatman, Brianna Jaramillo, Kayla Sessler and Jade Cline will all be back! And because it is actually a new season this time, they have been given new contracts and “significant pay increases,” according to The Ashley. The new season is expected to premiere in late spring or early summer of 2019.

I’m a fan of the show, but I will admit that I’m a little surprised that MTV has elected to renew the series despite its seemingly low ratings. As we previously reported, the first half of Season 1 finished on a very high note as the final three episodes (including the Reunion) finished well above 800,000 viewers. Season 1B premiered on October 15 to a much lower number of 646,000 — and that number continued to drop. For the remainder of the season, the show struggled to get close to 600,000 each week, and even dipped below 500,000.

Despite MTV’s vote of confidence by renewing the show, they have yet to make an official announcement.

Meanwhile, a website called Champion Daily is disputing The Ashley’s story. “Multiple insiders” tell the site “the cast has not signed on for another season at this point. While MTV has expressed interest in bringing back the show for another season, nothing has been finalized as of yet. Due to this, the show is not currently in production and season 2 is not officially happening as of yet.”

I wouldn’t normally bring up a report calling The Ashley’s impeccable Teen Mom reporting record into question, but this Champion Daily site paid for links from some of the cast members of other Teen Mom shows, and so it got a lot of attention on social media. Of course, I don’t really need to defend The Ashley when she can fend for herself just fine:

Not sure who your sources are but they've given you some bad info! 🙂

Guys, I stand by my story. Don't believe the clickbait stuff from a weird random site. https://t.co/ZcX7tDJyKn

So whose story are you most excited to see in Season 2?