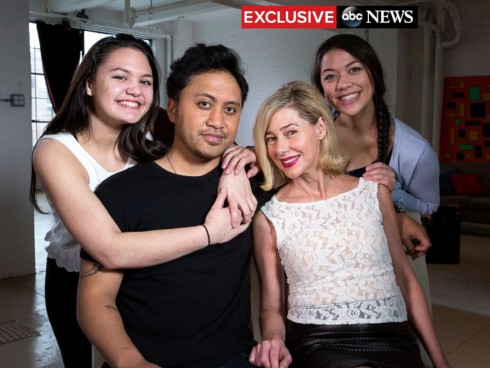 It’s been almost two decades since teacher Mary Kay Letourneau made headlines by getting pregnant with her 12-year-old student Vili Fualaau’s baby. Barbara Walters caught up with the couple, who are still together and parenting their two teenage daughters.

“If it wasn’t strong enough in the beginning, it wouldn’t have carried through those years,” Mary Kay told Barbara Walters in the 20/20 interview airing tonight.

May Kay was 34 and the mother of four when her affair with Vili Fualaa was exposed. She described how it began, the summer after she had Vili in her sixth grade class. “The incident was a late night that it didn’t stop with a kiss,” 53-year-old May Kay explains. “And I thought that it would and it didn’t.” She was pregnant by the start of the next school year, and got found out when her husband found love letters to Vili.

She gave birth to their first daughter Audrey who’s now 17, and got pregnant with their second daughter, 16-year-old Georgia, before going to prison for seven years on statutory rape charges.

The couple say their daughters are “unfazed” by the strange circumstances of their family, and that they never really had a discussion with them about what was going on.

“There was never a sit-down chat, ‘Now is the time we’re going to talk to our children about this,'” she says. “They seemed to already know… because they grew up with it… There’s just never been a ‘Wow, we better explain.'”

Mary Kay married Vili in 2005, soon after she was released from prison. They decided to do a high-profile interview on their 10-year anniversary because they said they anticipated media attention surrounding this milestone, and wanted to have their say themselves.

Vili admits in the interview that their marriage has had “up and downs,” and that he’s suffered from depression and been through some dark times. He was 14-years-old with two young children, and felt very alone and isolated. “I don’t feel like I had the right support, the right help behind me … from my family, from anyone, in general,” he said. “I mean, my friends couldn’t help me because they had no idea what it was like to be a parent, I mean, because we were all 14, 15.” He says he was forbidden from talking to and seeing one person he wanted to talk to, Mary Kay.

Just last year Mary Kay spent some more time in jail over driving under a suspended license and failing to appear in court. Now 31-year-old Vili works at a garden center during the day, and DJs as “DJ Headline” at night, while Mary Kay works as a legal assistant and wants to get back into teaching someday.

Mary Kay Letourneau now: Does she regret her longterm relationship with a student?