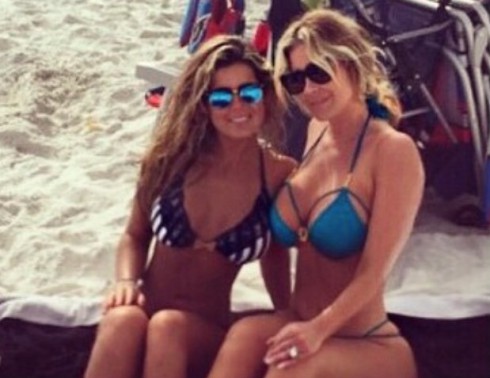 Kim Zolciak-Biermann made it clear before that she’s going to post what she wants on Instagram, no matter what people have to say about it… And that applies to 18-year-old daughter Brielle Biermann’s bikini photos.

After Kim shared the Baywatch inspired picture of Brielle earlier this week, most people were nice, but several commented it seemed inappropriate.

“Way too much emphasis on physical appearance,” one said. “When are you going to outgrow this?”

Another speculated, “So you let her get plastic surgery too? She’s too young for that.”

Rather than back down, Kim posted another bikini picture of Brielle and boyfriend Slade Osbourne — along with the pointed hashtags “#SheIs18AnOldEnoughToHaveABoyfriendSoShutUp #SheIsOldEnoughToWearABikiniSoShutUp #SheIsConsideredALegalAdultSoShutUp #SheIsStillMyBabySoShutUp.”