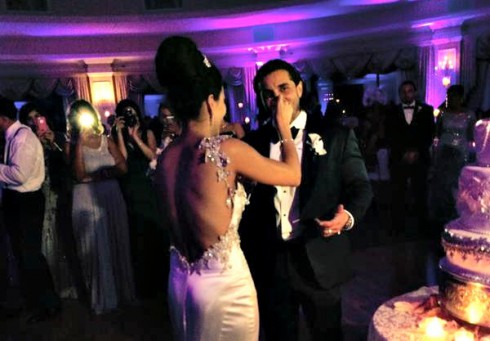 When most people get married, they are thrilled to receive a KitchenAid mixer or handful of Target gift cards. But, as viewers learned when watching Growing Up Gotti 10 years ago, the grandsons of legendary mobster John Gotti aren’t “most people.” So, when John Gotti Agnello got married last weekend to longtime girlfriend Alina Sanchez, Page Six reports that each of the 500 guests were required to give the newlyweds at least $5,000 — which amounted to a new $2.5 million nest egg for John and Alina.

In exchange for their gift, the guests were treated to a night at the luxe Oheka Castle on Long Island. The celebration reportedly began Friday afternoon and lasted for 20 hours, until 1 p.m. on Saturday. During that time, they had a multi-course dinner and fancy breakfast. One insider said the party was intentionally long so as “to stagger the felons.” The person explained, “Felons can’t consort together… That’s standard mob procedure.”

To be extra safe, the wedding was booked under the bride’s name and there was “enough security to guard an army.” However, that still didn’t stop the groom’s dad, Carmine “The Bull” Agnello, from getting into it with his ex-wife, Victoria Gotti, who was at the wedding with her new boyfriend. Even though Carmine was flanked by two law enforcement officers because he’s awaiting a trial in Ohio, he reportedly “was yelling on the grounds before the ceremony” at Victoria.

Of those reports, Victoria’s spokesperson said, “I think whomever is creating these stories has watched The Godfather one too many times.”