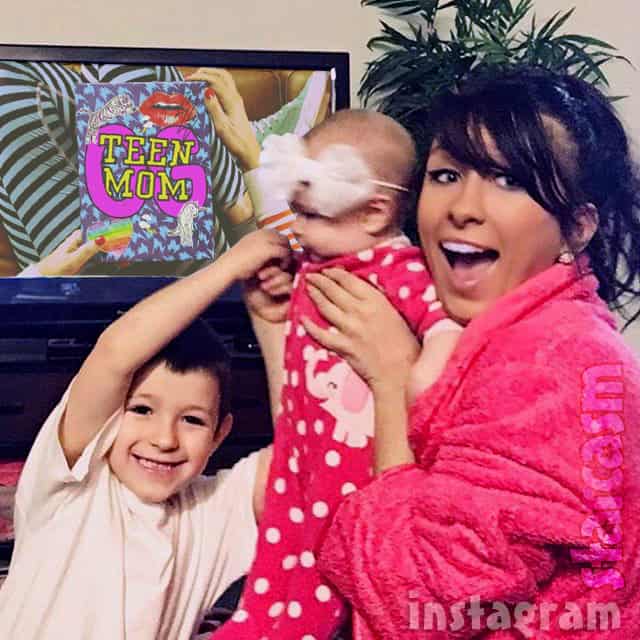 16 & Pregnant alum Nikkole Paulun is speaking out against MTV, claiming that the Teen Mom franchise presents a distorted view of what it is really like to be a young mother.

Nikkole made the post on her Facebook page, where she shares a lengthy essay every couple months or so — which we often share here at Starcasm. We’ve always found it best to present her entries in their entirety, so that’s what we will do here. And be sure to scroll down for another, shorter entry by Nikkole on what it’s like to be seen — and judged — as a single parent. Keep on scrolling past that to get the latest update on Nikkole, her son, and her daughter!

UPDATE – Nikkole just posted about potentially doing a series of videos documenting “the good, the bad and the ugly” of her experience being a young single mom — just click here to like and/or leave your comment/request for Nikkole! Nikkole’s post:

Like this status if you would like me to make videos showing my struggles since becoming a teen mother, the good, the bad, and the ugly. Censor nothing & show you the TRUTH behind teen motherhood, the one MTV doesn’t show. Comment below with what you’d like me to include as well! ❤️

UPDATE – Jenelle Evans has since responded to Nikkole with some slightly controversial comments. (Just click the link.)

It makes me seriously sad to hear/see so many young girls intentionally getting pregnant thinking they are going to live the lives of the girls on Teen Mom. They make hundreds of thousands of dollars, go on vacations every month, have nice houses & cars, and don’t work.

Yes, Teen Mom shows the struggles of motherhood and relationships but it doesn’t show the TRUE STRUGGLES of being a young parent. The FINANCIAL STRUGGLES! Let me tell you what Teen Mom doesn’t show.

Normal Teen Moms don’t get to be stay at home moms going on vacations every month while living in a nice home.

Normal teen moms have to put their child in daycare while they work these crazy hours. The cost of groceries, rent, daycare, utilities, car payment, diapers and so on will NOT leave you with enough money to buy yeezys or a new house, it just won’t.

Normal teen moms so badly want better for their children, so they go to school to pursue a degree and now have student loans and even more daycare costs to pay for. & that also means even more time they have to spend away from their child!

Normal teen moms struggle between letting bills go to collections or buying groceries for the week.

Normal teen moms cry because they just want better for their child but can’t seem to find a way to get ahead.

Normal teen moms have to bust their ASS to get where they want to go in life, it’s not just handed to them.

BEING A TEEN MOM IS NOT EASY. IT IS NOT GLAMOROUS.

Don’t get me wrong, I love my children and I work so hard to make sure they are well taken care of but it’s not the glam and glory you are being exposed to on tv. Would I give anything to be a stay at home mom and have enough money to have everything I need? ABSOLUTELY! But this isn’t reality people.

Be smart with your sex life. Establish yourself. Get a degree. Get an amazing career. Find someone who loves you and truly wants to be with you forever. Then when you are financially stable, then think about having a baby. You will still struggle with motherhood, everyone does, but as a teen who has yet to do these things, it is just SO much harder.

Please stop believing the things you see on TV to be the way things really are because they’re NOT! Parents of young women and men too, I urge you to talk to your teens about this. I’m absolutely SHOCKED by the amount of girls who I’ve found out believe that they can get pregnant at 16 & live like celebrities.

I’m so sad that the show has turned into giving these people the wrong message. When I did 16 & Pregnant I really hoped my struggles would stop girls from making the same choices i did. Now that MTV is paying the girls so much it just isn’t reality anymore. What you see on there is a fairytale compared to the lives of normal teen mothers.

NIKKOLE PAULUN ON BEING JUDGED BECAUSE SHE IS A SINGLE MOM

The looks on people’s faces when they realize I’m a single mom can be so disappointing sometimes. They look at me like they’re sorry for me. Like they see a “poor single mom” and her “poor children.”

Being a single mom does not mean we are a broken family. It does not mean we are sad or we are miserable. In fact, we are happy! My children are happy and so am I. How happy would they have been had I stayed in a relationship with my ex who made me miserable? How happy would they be seeing me cry and being treated like crap? I never want them to grow up and think that type of relationship is healthy or okay.

Instead they get to have an awesome, independent, and strong SINGLE MOM! A mom who is happy and confident. A mom who is always there for them even when dad may not be.

I could not be more proud of myself for how well I handle being a single mom and doing it all on my own. My kids are happy and so am I & we always have the smiles on our faces to prove it.

So the next time you see a single mom, instead of looking at her like you feel sorry for her, tell her how good of a job she’s doing! Tell her how happy and healthy her little family looks. Sometimes we still need to hear these things to know we’re doing the right thing.

Being a single mom is not a bad thing and it doesn’t mean my family is broken. It doesn’t mean that I’m weak, it means I’m strong. It doesn’t mean I’m embarrassed because I’m PROUD. My kids are everything to me and I would do anything for them. I may not have wanted to be a single mom but that’s just the way things worked out. My intentions were to be the best mom I could be & despite doing it alone, that hasn’t changed. ❤️

My @fabfitfun box arrived today! Me and Ellie couldn't wait to tear into it and see what goodies we got this time! My favorites in this box are the Beach Wave spray and the adorable yoga towel. Use code "NIKKOLE" to get $10 off your box at **FabFitFun.com** ? #fabfitfun #fffpartner

As far as an update on how Nikkole is doing, she’s pretty much taken care of that with her posts above! She, her 6 1/2-year-old son Lyle, and 1-year-old daughter Ellie seem to be doing well, despite Nikkole’s financial struggles as a single mom.

There is one update in the relationship drama department, however, as Ellie’s dad, Ryan Rice, has been trying to push for visitation through the courts. Nikkole posted about it on Twitter recently:

It's kinda crazy how 2 lawyers & a judge ultimately decide the right way to protect & parent Ellie for me. I just hope they do what's right.

@16and_Pregnant court for her dad to get time with her. Nothing too serious but after everything I don't trust him with her.

It’s unclear how the court date turned out, but there were numerous photos of Ryan and Ellie together that recently surfaced online. Meanwhile, Nikkole has apparently overcome her financial struggles enough to purchase a house! From July 22:

I just got the email that I've been pre-approved for the house I want ? this has been such a wonderful day! ?????

Congratulations to Nikkole and her family!

VIDEO No one can impersonate Barbara Evans like Jenelle Evans