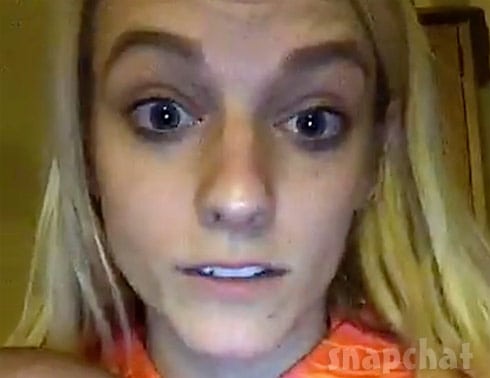 Teen Mom 3 star Mackenzie McKee’s dog Mia gave birth to two puppies earlier today via C-section. Unfortunately, only one of the two puppies survived. Mackenzie revealed the sad news with a series of rather startling Snapchat videos that included her oldest son Gannon kissing and carrying the dead puppy around.

“Update everyone,” Mackenzie narrates the first clip as we are shown Mia’s C-section scar. “Mia just had a C-section, and one puppy made it,” Mackenzie adds as she pans over to a cute little puppy wiggling around with its eyes closed.

The video then shifts abruptly to a scene with the living puppy crying beside its dead sibling as Mackenzie says, “He’s so sad.”

Mackenzie then reveals that the mother is refusing to feed her puppy, so she is having to do it herself with a bottle.

In the next clip we see Mackenzie holding her youngest son Broncs with the word “Help” across the bottom along with the shocked face emoji. “OK. So, one of the dogs didn’t make it,” Mackenzie says, “and I don’t know how to tell my son.” The camera pans over and we see Gannon right beside Mackenzie holding the deceased puppy in both hands in front of his face as he says something I can’t quite make out.

“What do you plan to do with that puppy?” Mackenzie asks Gannon

“Keep it because…” Gannon says with the dog in front of his mouth so that the rest is inaudible.

“Gannon, you know that dog is dead, right?” Mackenzie asks. “Yeah,” says Gannon just as another clip begins in which he is still holding it.

“Gannon, I think that that doggie went to doggie heaven and we need to bury it,” says Mackenzie. Gannon holds the dog back from Mackenzie to keep it away. “Well,” she continues, “you’re just going to keep a dead dog?”

Gannon later pleads with Mackenzie, but she asserts “Gannon, we’ve got to bury the dog.” Gannie gives the dead puppy a long kiss and Mackenzie says “Oh gosh.”

Click HERE and HERE to see screen caps from the videos, but be forewarned that they could be quite disturbing to some!

Mackenzie later decided to head off the critics of her clips with a message — but it wasn’t about Gannon kissing and carrying the dead puppy around. “Just for clarification,” she begins, “before I start getting all these crazy messages, we did leave the momma alone with the puppy for hours, and she just wanted nothing to do with him. We called the vet and asked everything that we should do, and he said we needed to feed him. So yes, we have done everything that the vet told us to do, and Gannon is having a hard time saying goodbye to the puppy that didn’t make it.” 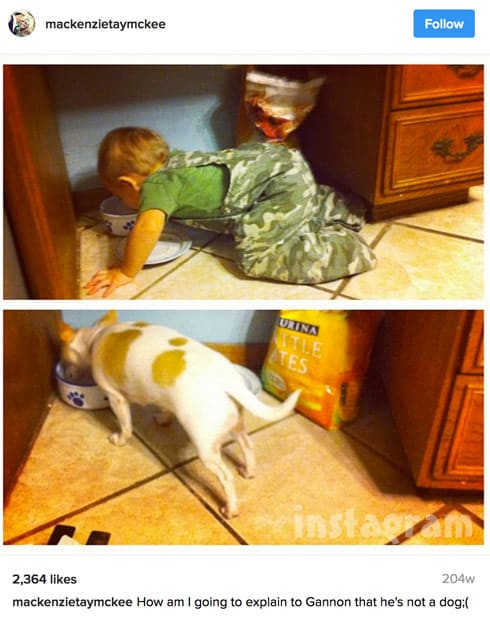 I’m guessing that children playing with dead animals wouldn’t raise so much as eyebrow in a rural setting such as a farm, but I think folks on social media in this day and age might just freak out a bit. What do you think? Was Mackenzie letting Gannon takes things a little too far with the deceased little dog? And was Mackenzie taking things too far by posting videos of it on Snapchat?