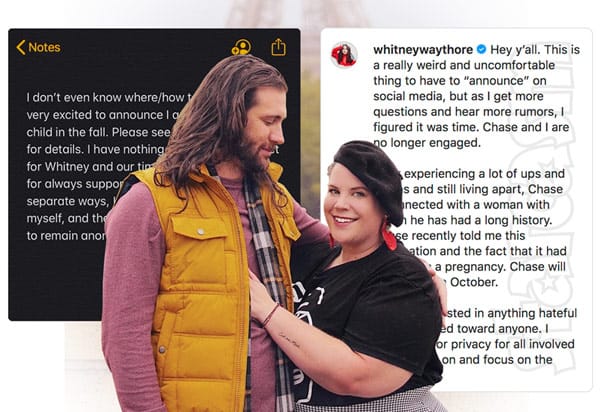 We have some unexpected good news and bad news for fans of My Big Fat Fabulous Life. The good news is that Whitney’s fiance Chase Serverino is going to be a dad! The bad news is that the baby isn’t Whitney’s and the two of them are no longer together.

Whitney made the announcement on Instagram with a caption that accompanied a solid black square image. “Hey y’all. This is a really weird and uncomfortable thing to have to ‘announce’ on social media, but as I get more questions and hear more rumors, I figured it was time. Chase and I are no longer engaged.”

Whitney then very calmly moved on to the other news. “After experiencing a lot of ups and downs and still living apart, Chase reconnected with a woman with whom he has had a long history. Chase recently told me this information and the fact that it had resulted in a pregnancy. Chase will be a father in October.”

The message concluded with Whitney asking for her fans to not be vindictive. “I’m not interested in anything hateful being directed toward anyone. I would ask for privacy for all involved as we move on and focus on the future.”

After Whitney’s post, Chase shared his own announcement on Instagram in the form of a screen capped Notepad entry. “I don’t even know where/how to start,” reads his entry. “I am very excited to announce I am expecting a child in the fall. Please see Whitney’s post for for details.”

Chase also kept things extremely positive and also asked for privacy. “I have nothing but love and respect for Whitney and our time together. Thank you for always supporting us. As we now go our separate ways, I ask for privacy for Whitney, myself, and the mother of my child who wishes to remain anonymous.”

The couple’s split has been rumored for weeks after both Whitney and Chase scrubbed their social media profiles of photos of each other last month. Actually, Chase having a pregnant girlfriend isn’t a surprise either.

Instagrammer @90DayFiance_etc had a source back in mid April who revealed that Chase was going to be a dad. “New info regarding the fakeness that is Whiteny & Chase,” the initial post read. “His real girlfriend is pregnant with his child. Due in August. It’s a girl. Chase doesn’t know how this Whitney thing is going to evolve & seemingly doesn’t care but they will inevitably ‘break up’ on the show somehow — now sooner than later. 🤔”

The post was removed, but re-posted on Saturday along with this explanation for the deletion:

Gentle readers – I posted this story on April 16 but took it down because my source was afraid of being found out. Well, some time has passed, rumours abound on Reddit and elsewhere and judging by the absence of Chase on Whitney’s social media, it seems to be true (allegedly 😉). I like this show but this level of fakery was so bold and reckless and insulting, I don’t think it can recover. In other words ….the f**king AUDACITY.

If you haven’t been following My Big Fat Fabulous Life discussions online, you might not be aware of the reports of Whitney and Chase’s relationship being faked for the show. It’s not a difficult theory to buy into, and the details of the break up — and especially how Whitney and Chase announced it — certainly seem to suggest that the engagement might not have been real.

Congratulations to #MyBigFatFabulousLife's @WhitneyWayThore on her romantic Paris engagement to fiance Chase Severino! Visit Starcasm.net (article link in our stories and #MBFFL highlights) to get all the details, plus meet Chase in the extended preview trailer for #MyBigFatFabLife Season 7, premiering January 7 on @TLC!

@90DayFiance_etc Shared excerpts from Whitney’s announcement on Thursday and added this frustrated message:

Here’s what bothers me; there was no need for the fraud. We were enjoying watching her dance and live her life. We knew that some of the storylines were produced but we could overlook it. But this? Well, this level of fakery is impossible to come back from. For those of you who think they just broke up organically, you’re wrong. This was a fake story that I broke mid April after getting a DM from a very reliable source. I predict this show doesn’t survive 🤷🏻‍♀️ Last season felt staged and fake and oh look…it was.

It will be interesting to see if the break up is featured on the show, if it returns. And if it is included on the show, how producers will handle it?

My Big Fat Fabulous Life: Are Whitney Thore and Tal Fish adopting a baby together? ?