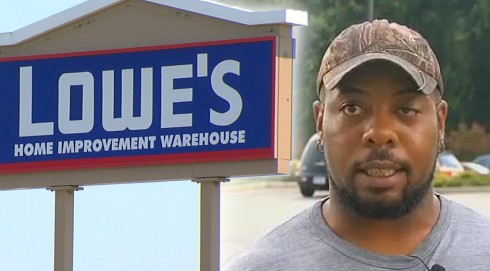 When Lowe’s employee Marcus Bradley and his partner showed up to make a delivery at a woman’s house in Virginia, the woman turned them away. Their manager later told them it was because Marcus is black and “They don’t want you at the house.” A white driver was sent in Marcus’ place.

“I mean, I thought that Lowe’s would take up for me,” Marcus told WSET.

Alex Brooks, who has worked alongside Marcus for nearly eleven years, agreed, saying, “To me, it just ain’t right for a business that we work at to go on with the woman’s wishes.”

When confronted by WSET about it last week, however, the customer said it was her right “to have whatever I want and that’s it.” She added, “No, I don’t feel bad about nothing.”

After WSET began investigating the story, a representative for Lowe’s said they were troubled by the situation. The spokesperson explained, “Under no circumstances should a discriminatory delivery request be honored as it is inconsistent with our diversity and inclusion core values and the request should have been refused. The investigation has concluded and the individuals involved are no longer with company.”

The news station confirmed that the store manager was fired for approving the request.