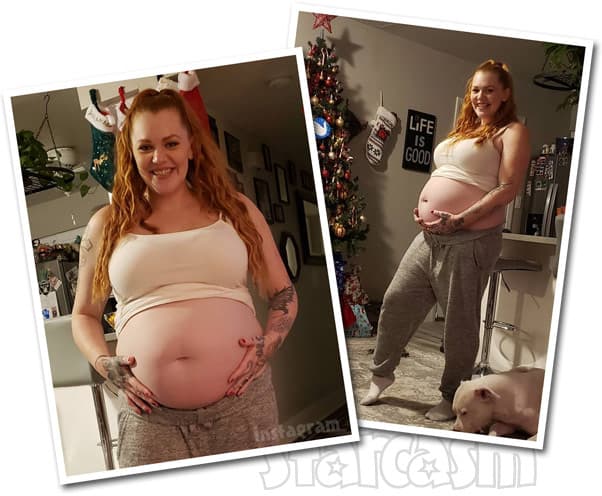 Love After Lockup: Life After Lockup star Brittany Santiago is currently pregnant with her second child with husband Marcelino Santiago, and over the holidays she shared the first photos of her growing baby bump.

“Since we never officially announced our pregnancy, I thought I would post some baby bump pics!” Brittany captioned the Instagram gallery posted on December 23. Brittany is referencing the fact that she and Marcelino once again had to remain silent about her pregnancy due to contractual obligations with WE tv. But, once the trailer for the new season of Life After Lockup revealed that she was pregnant again, Brittany was free to open the baby bump floodgates on social media!

Despite their valiant efforts to keep the pregnancy a secret, the internet spoiled the surprise. We revealed back in November that Brittany was expecting again, and it was reported at the time that she is due in February. Judging from the size of the bun in her oven, that due date sounds about right!

Unlike her current pregnancy, Brittany and Marcelino were able to keep it a secret when Brittany was pregnant with their daughter Zoila. The couple managed to not only keep the pregnancy a secret, but also Ziola’s birth! However, all their valiant efforts unraveled when Brittany’s mother Cynthia posted and deleted a photo of little Zoila on Facebook.

The new arrival will join big sister Zoila and big brother Giovanni in the Santiago’s rapidly growing family. Speaking of Giovanni, we have an update on the heated custody battle over him between his mother Brittany and dad Tito.

The last time we checked in on the case, Brittany had managed to keep temporary sole legal custody and temporary primary physical custody of Giovanni after Tito “tested positive for THC, Amphetamine, and Methamphetamine” in early August. Tito was also ordered to pay child support and complete a six-month drug monitoring program. He was given two one-hour supervised visitations with Giovanni a week, but only after he passed a drug test for two consecutive weeks.

#LoveAfterLockup star Brittany Santiago gets temporary full legal and physical custody of her son Giovanni after his dad Tito failed a recent drug test! Get all the exclusive details! #LifeAfterLockup https://t.co/sMV0kUJYwb

We now have some additional information about Tito’s failed drug test, as well as the current custody situation with Giovanni. According to a court order from December, Tito’s “drug test came back positive for 1750 pg/mg of methamphetamine, indicating Plaintiff is a habitual user of methamphetamine…The Court further notes that Plaintiff delayed taking his drug test for two (2) hours after the conclusion of the August 6, 2019 hearing.”

The order also reveals financial details in the case. Beginning in September of 2019, Tito is obligated to pay $720 a month in child support, roughly half of which was to be paid to Giovanni’s daycare, and the remaining amount directly to Brittany. Tito also had to cover all the drug testing costs, visitation costs, and $5,000 for Brittany’s legal fees.

It’s unclear at this time if Tito has passed the two drug tests required for him to begin having visitation with Giovanni.

A status check hearing regarding Tito’s Patch monitoring is scheduled for March.

You can catch up with Brittany, Marcelino, Giovanni, Zoila, and maybe Tito (although I seriously doubt it) with new episodes of Love After Lockup: Life After Lockup airing Friday nights at 9/8c on WE tv.