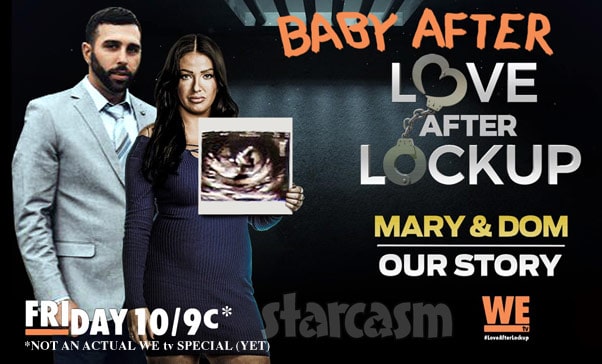 WE tv’s Love After Lockup does not have a very high success rate as far as couples remaining in love after Love After Lockup, but season 1’s Mary and Dom are a glaring exception. The Canadian husband and wife remain happily married, and they announced this weekend that they will soon be growing their family as Mary is currently pregnant with their first child!

The tweet was accompanied by a photo (below) of parents-to-be Dom and Mary embracing with Mary holding sonogram photos. (Dom is sporting a “DAD” baseball hat.)

The announcement was met with numerous congratulatory messages from fans, including Mary’s Season 1 co-star Johnna DiGrigoli. “Omgggggg girl!” Johnna responded on Instagram. “Yes! So excited for you!”

Mary also replied to everyone else sending well wishes and congratulations with a message posted to her Instagram story: “That you all for the overwhelming amount of love and responses! Love you guys xo.”

The pregnancy announcement comes two years after Dom’s release from prison. He was serving time for assault after a brutal bar brawl in 2009.

The couple had a quickie marriage on the show, but they would follow up a year later with a full-blown formal wedding ceremony with numerous friends and family members in attendance.

Congratulations to Mary and Dom! On their growing family, and on overcoming the Love After Lockup curse! Mary has expressed some frustration at WE tv for the direction producers have taken the concept of the show, but I’m hopeful we will be getting an on-camera update on the couple when the baby arrives –, if not before, during, and after!

Although there are a handful of couples from the first two seasons of Love After Lockup that may or may not still be together, this will be only the second child born from a Love After Lockup relationship. Mary and Dom’s child will join Zoila, the daughter of Season two stars Brittany and Marcelino Santiago.

Life After Lockup returns for new season with 8 couples and 16 episodes!