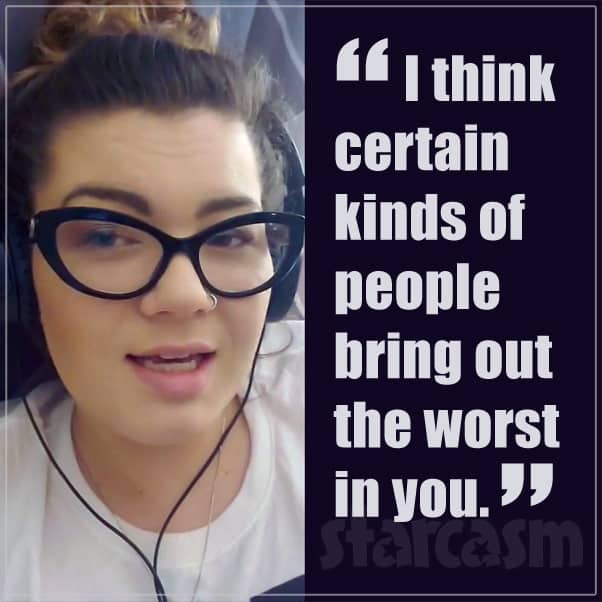 Teen Mom OG star Amber Portwood has been essentially radio silent on social media over the past few weeks as she deals with the fallout in the wake of her most recent domestic violence arrest. That changed in the early AM hours this morning when the reality star did a surprise Instagram Live session!

Amber was online for a little over 15 minutes as she updated her followers on how she’s doing. She mentioned very early in the video that she had gotten up to get some water, but it seems obvious that she took the time to do her makeup before recording.

Amber didn’t go into much detail about her pending criminal case. She also didn’t really touch on her current custody battle with ex Andrew Glennon over their son James. However, she did offer up some interesting comments, including information about her psychiatric treatments over the past decade. She also responded to her ex Matt Baier’s recent interview with Youtuber Without A Crystal Ball.

I’ve transcribed the majority of the Amber Portwood Instagram Live session, including portions where she read comments and responded.

It’s been really crazy lately to go through my DMs because of the negativity…I just kind of stopped doing that. But, I’ll be back in my DMs, and I’ll be back on here to start talking to you guys soon.

You guys already know I miss you guys. I love you guys. It’s been crazy. It’s been crazy not talking to any of you guys, and just seeing how you are, honestly…You guys know how much I appreciate the support. Especially through such hard times. Yeah, I mean, it’s been really — it’s been crazy, you know? It’s been a crazy life for the last couple of months.

AMBER: No. No. Absolutely not.

I think I’m more empowered at the moment to move forward in my life and honestly show the world a whole different side of things that I think hopefully will happen. But anyways, that’s a whole other situation.

People do judge what they don’t understand, and that’s OK. That’s OK.

You guys know everybody in life gets their ups and downs, and we just have to learn from everything that we do and move forward. I think understanding is a great thing for a lot of people to learn — understanding other people’s lives. I think I’ll have my day to explain a little bit more. I mean, I don’t know. I don’t really know if I want to to be honest. I just feel like some things are already, you know, explained.

AMBER: Yes I have, ten years ago. Like I said, people make mistakes. It’s OK.

AMBER: No, I have not been diagnosed with that. I promise. [laughs] I’ve been ten years going to a psychiatrist. I’ve had about ten to fifteen different psychiatrists, and I’ve never been a sociopath, so it’s not all that true.

Leaked audio of a very disturbing verbal altercation between #TeenMomOG's Amber Portwood and ex Andrew Glennon in the presence of their infant son James has surfaced. Visit the link to listen to the audio and/or read our full transcript. https://t.co/pJZHJhw2je

COMMENT: Those who live in glass houses should not throw stones.

AMBER: Yeah, well, you know not everybody has learned that yet in their lives and that’s OK. It doesn’t mean everything I do I’m proud of. However, it does mean that we have choices to move forward, so that’s good.

AMBER: I don’t know about that…I think that there are some really great men out there that I do attract, I’m just a sucker for love y’all. I don’t know. I think I jump into relationships very fast. I think I don’t fully look at the picture of the situation of why I’m in that relationship until it’s kind of, I guess, too late.

AMBER: I will never stop loving.

AMBER: Yeah, I did see Matt’s interview. But there were a couple of things that were not — I don’t know if he just doesn’t remember or just weren’t true. [laughs] I didn’t like “see it” see it, but I heard a lot about things.

COMMENT: Relationships can sometimes bring out the worst in some people.

AMBER: Well, I think certain kinds of people bring out the worst in you, to be honest with you, not just relationships. I don’t know if it’s necessarily that, I think it’s just people.

AMBER: Absolutely! Behavior is a choice. But mental health is not a choice. So I think that you are probably a good person, but just uneducated on some things. So that’s OK. That’s never [an excuse] necessarily, just understand that you might be uneducated on certain things. Like I said, one day I’ll be able to speak upon certain things that have been, you know, brought to you guys’s attention.

After much speculation and false reporting, it is confirmed that @MTV has not fired Amber Portwood, and she is already filming for a new season of #TeenMomOG!
????‍♀️?? https://t.co/b0JlrkGEXV

Like I said, I’ve been going to a psychiatrist for about ten years. I’ve been diagnosed many times hoping to get that cure, as you guys know. But there’s just not one. Yet! Maybe one day.

I love you guys. I will probably not talk to you soon. [laughs] But, I wanted to let you guys know that I am OK, and I love you…Sending love to all my beautiful souls, and I will talk to you probably, um, [very long pause] I don’t know. We’ll see. We will see. Thanks for sending positive vibes.

But he who endures to the end shall be saved….?