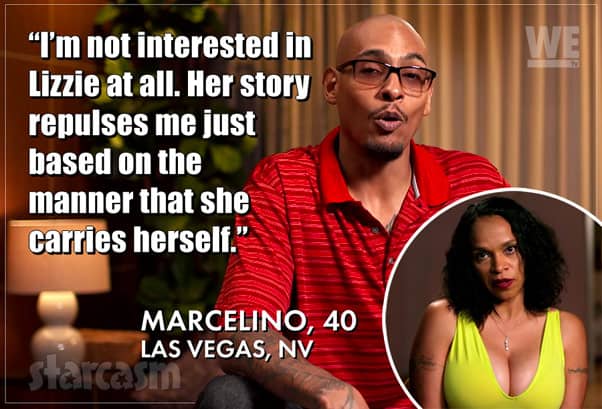 On the current season of Love After Lockup: Life After Lockup, Marcelino Santiago is not very fond of the fact that his wife Brittany wants to hang out with her ex-convict friends. It appears that Marcelino’s aversion to convicted felons doesn’t stop there, however, as he recently threw some of his formerly incarcerated Life After Lockup co-stars under the prison bus!

“I’m not a fan of any of the other couples except for Andrea [Edwards] and Lamar [Jackson],” Marcelino reveals to Reality Tea in a recent interview. “I’m not gonna sit here and disparage the other couples, but I am going to say certain things.”

At this point, Marcelino did indeed sit there and disparage the other couples — well, one other couple and one trio. “Michael has a lot of growing up to do because now he’s responsible for two lives, two babies,” Marcelino says of love triangle prison Lothario Michael Simmons. “At the same time, he’s doing the wrong thing by two different women,” Marcelino continues. “Later on in life, your daughter is going to grow up and watch this, or at least know about it, and you’re her number one influence. As a father of a daughter now, we have to be responsible for raising women and [not] just hussies and scallywags.”

Speaking of hussies and scallywags, it seems as though Marcelino might put his co-star Lizzie Kommes in one or both of those categories. “I’m not interested in Lizzie at all,” he says. “Her story repulses me just based on the manner that she carries herself, even post-filming Love After Lockup. When I see the things she does on Instagram, I think ‘OK. This is really the way you wanted to be to this man? Which is terrible.’”

Marcelino does admit that Lizzie’s ex Scott Davey has some culpability too. “Scott has to be responsible for his own self. At the same time, I do think he was manipulated a little bit.”

The interview did not include any elaboration on his fondness for Andrea and Lamar, and didn’t explain why Marcelino is not a fan of Tracie and Clint Brady, despite the fact that the four of them hung out together in Las Vegas earlier this year.

Of course, Marcelino has his fair share of detractors as well, due mainly to how he comes off as controlling of Brittany on the show. He is quick to dispel that perception, however. “Brittany is free to do whatever she wants,” he says, adding that he would describe himself more as “protective.”

He also defends himself against some of the other conclusions that people may draw from his portrayal on screen. “When people think you’re controlling that can lead to them thinking other things like you have a low self-esteem, which is so far from the truth,” he explains. “I’m a marine. I’m just first up and first to go.”

On a random side note, I’d like to thank Marcelino for providing this blog a reason to use any derivation of the word scallywag. We’ve had more than 25,000 posts over the past eleven years, and that is apparently the very first time we’ve included that wonderful word in a post! It made me realize that there aren’t very many reality shows about pirates.

Also, can somebody PLEASE start a petition demanding that WE tv have a Life After Lockup Reunion special!? We NEED this to happen!