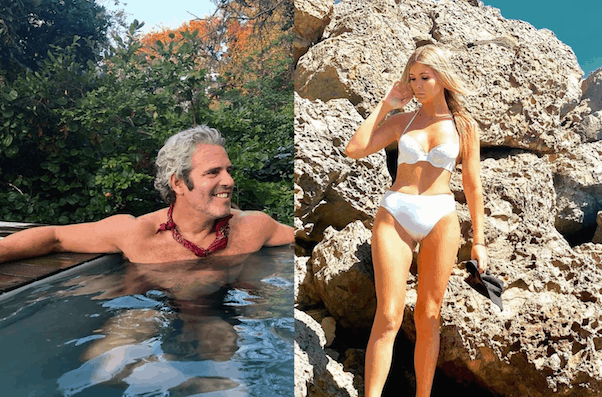 Andy Cohen appears to have shut the door pretty firmly on the idea of Caitlyn Jenner joining the Real Housewives of Beverly Hills cast any time in the near future. But he’s not done the same on the gossip about Sophia Hutchins on RHOBH. In a recent interview on Andy Cohen Live, Andy only said no to Caitlyn specifically, and didn’t quite address the possibility of the 24-year-old Sophia joining up.

As we reported earlier this week, there’s been a flurry of talk about both Caitlyn Jenner and Sophia Hutchins on RHOBH of late, much of it seemingly stirred up by the women themselves. And gossip about Caitlyn jumping from Keeping Up With The Kardashians to the Real Housewives has been out there for years. So in a sense, it was almost a surprise to hear Andy give an emphatic “No” to the idea, even if Caitlyn has never openly campaigned to become a Housewife.

However, as we also pointed out this week, it hasn’t really looked like both Caitlyn and Sophia wanted to get on the show. Whoever started the rumor said specifically that Sophia had reached out to at least one former cast member to see if she would be a good full-time fit, and that Caitlyn was only coming along as a friend to the Housewives. (Now that I think about it some more, this reminds me of the time Scott Disick tried to power move Sofia Richie onto KUWTK as a way of getting back at Kourtney.)

But, as Andy made quite clear, that isn’t happening. We’ve transcribed Andy’s full comments below, but first, here’s the audio of him responding to questions of Caitlyn’s pseudo-candidacy:

In response to the rumors of Caitlyn Jenner and Sophia Hutchins on RHOBH — and to the shade-tastic question “Do you even know who Sophia Hutchins is?”, Andy had this to say:

I know that she’s Caitlyn’s girlfriend, right? (Interviewer: Well, roommate and manager, so…) Okay. She’s…you know what, this is one of those where the call is coming from inside the house, people. As they say. I know that they have expressed their interest publicly, on social media they’ve tagged me in posts saying ‘We think this is a great idea.’ But it is not — we’ve never talked to them formally, and that rumor is…not true.

And after that, when asked if he would “be open to an appearance from Caitlyn,” Andy — needing several long pauses to compose his thoughts — ultimately said, “Yeah, no, I just, I just don’t see it.”

But Andy never says anything similar about Sophia specifically. While he does confirm that she and Caitlyn pretty much started this gossip by themselves, all he really says regarding Caitlyn’s girlfriend/manager/suntan lotion supplier is “We’ve never talked to them formally.” And that’s something we already knew from the original story, which had Sophia going to former full-time RHOBH cast member and current guest star Eileen Davidson off-the-record to suss things out.

So it sounds like if Sophia is serious about wanting the gig, she’s going to have to step up her solo game. Sophia’s association with Caitlyn Jenner got her this much attention; the next step is one she needs to figure out on her own.