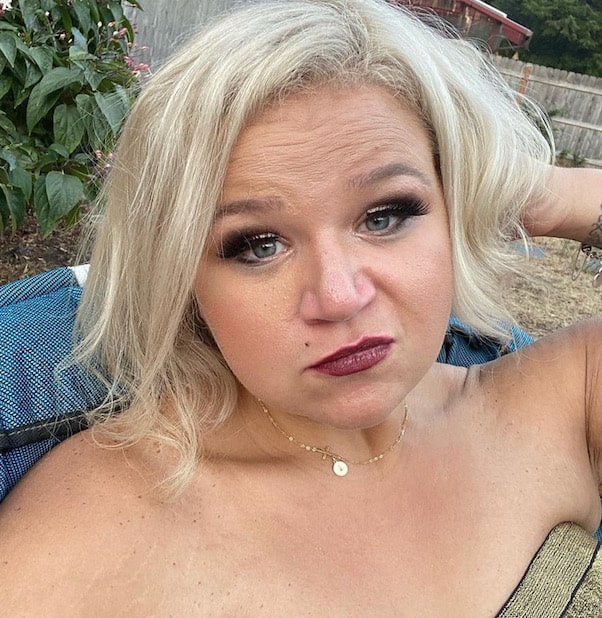 My 600 Lb Life star Brianne Dias has been going through a traumatic split from her estranged former partner Rick, and it looks like things may be getting worse.

A source close to the situation has revealed to Starcasm that the latest Brianne Dias and Rick update involves Jamie Moon, the “demon woman” for whom Rick left Brianne, allegedly accusing Brianne of cheating with another man while in Houston to work on her weight loss with Dr. Nowzaradan.

Brianne confirmed her estrangement from Rick in a Starcasm exclusive earlier this year. She told us she was “devastated and broken” by Rick leaving her for what an anonymous source told us was the “demon woman” of Florence OR, Brianne and Rick’s adopted hometown.

“I love Rick with all my heart,” Brianne told Starcasm, “[and] still do…[I] probably would be so stupid as to take him back.”

But we’re doubting that that’s still the case after the latest round of apparent claims. According to an anonymous source close to the situation, Jamie is now telling people that it was Brianne, not Rick, who had the affair. Making matters even nastier, Jamie’s supposed claim of infidelity involves Brianne’s miscarriage — something the My 600 Lb Life fan favorite revealed in a heartbreaking social media post this past summer.

The source provided a screenshot of an alleged text conversation between Jamie and an unidentified third party. In the screenshot, which only has messages from Jamie to the third party, Jamie appears to say that Brianne “f*cked a god damn man in f*cking Houston, got pregnant and came back to claim it was Rick’s and he’s been f*cking sterile for two god damn years.”

Again, we can’t say for sure that the person making the claims is indeed Jamie Moon. But some of the other details in the messages line up with what we’ve learned about the situation between Jamie and Brianne Dias and Rick.

Here’s the first of the anonymously sourced screenshots: 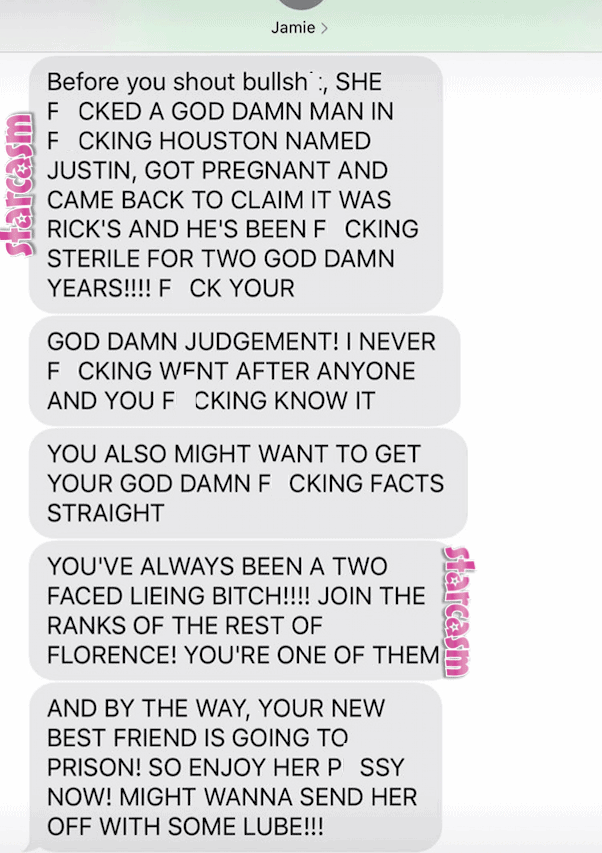 As far as the “going to prison” claim in the last message, it seems that Jamie — or someone associated with her — is further claiming that Brianne is about to get slapped with a lawsuit. At about the same time Jamie allegedly made the claims above, a separate message on Facebook, from a page called Veritas Aequitas, specifically called out Brianne and accused her of “slander, falsifying legal documents, Mail Fraud, Domestic Terrorism, stalking, illiciting [sic] violence and harassment of Rick Dias and Jamie Moon.”

Before we go any further, we should point out that “Veritas Aequitas” is the name of several different groups and pages across Facebook. None of them have the profile photo in the screenshots we received, and a closer look at some of the pages didn’t turn up any mentions of Brianne. So it’s possible that this particular page has since been deleted.

We should *also* mention that a search of court records for Lane County Oregon revealed no lawsuits pending against Brianne Dias. In fact, the only time her name came up was for the still-pending divorce between Brianne Dias and Rick. And, while we found a couple of old cases involving someone named Jamie Moon, there was nothing at all after 2005.

So: keeping all of that in mind, here’s a sampling of Veritas Aequitas’ extended rant against Brianne Dias from earlier this year. It seems entirely possible that none of the accusations below are based in reality, but they do make for an entertaining (if breathless) read.

Here’s the first part of the post, which includes the mention of a seven-count lawsuit that doesn’t appear to exist: 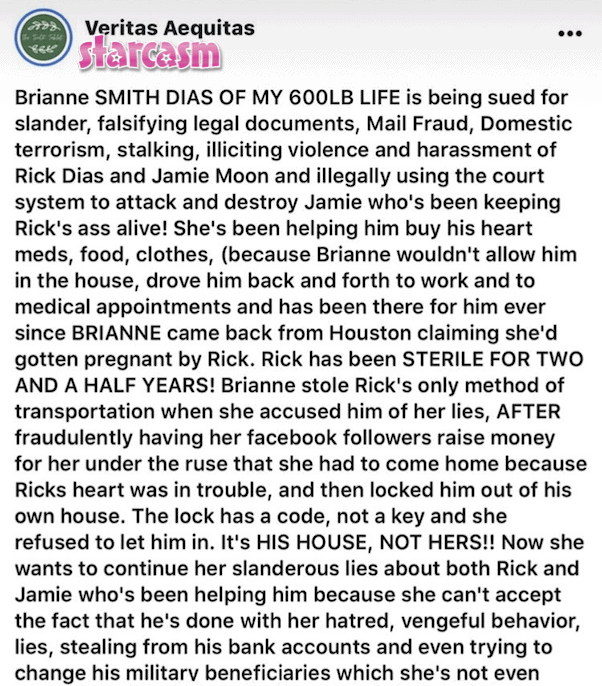 And here’s the second part, in which someone makes a pretty dangerous argument about domestic violence and further accuses Brianne of multiple counts of fraud: 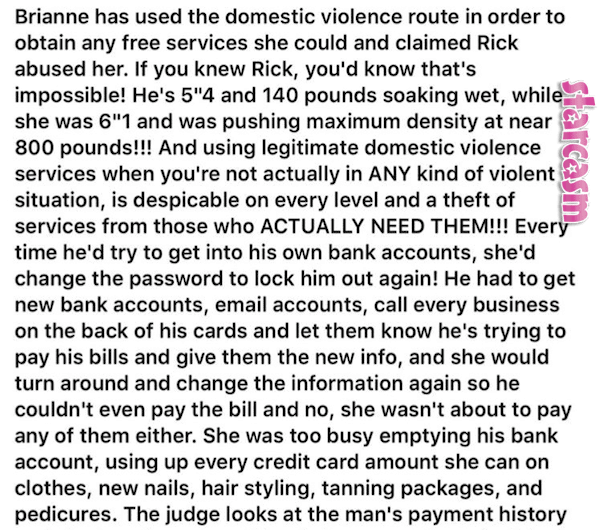 We’ve reached out to Brianne for comment and are still trying to get in touch with Jamie Moon. Regardless of whether and how much of any of these many accusations are true, just the fact that they’ve been leveled appears certain to make the rest of Brianne and Rick’s divorce a pretty acrimonious one.

RHOSLC Who is Whitney Rose’s husband Justin? Who was she married to before him?