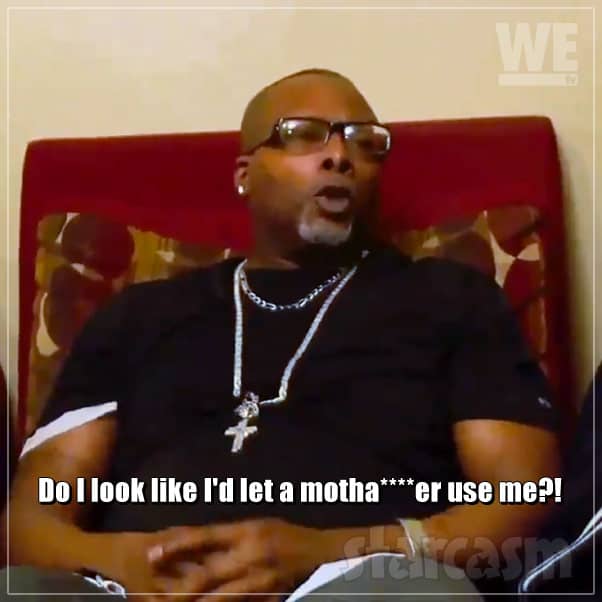 Fresh on the heels of the season finale of Life After Lockup, WE tv has released the first preview trailer for the new season of the original Love After Lockup!

“This summer, the hit series Love After Lockup is breaking out with a new season!” an excited narrator can be heard at the beginning of the clip.

At this point, were are treated to video footage of a prison as we hear various voices, which I assume are audio clips from the new season. Here is a transcript:

MAN: Just because a person’s in the jail does not make them a bad person.

WOMAN: What was she in prison for?

WOMAN 3: You never know about a person until they get out.

NARRATOR: See what happens when a new cast. Gets. Released!

After the narrator’s line, we are shown the first actual video footage from the new season. “She gone try to use you, man,” says a dreadlocked fella wearing a Billionaire Boys Club shirt.

A rather confident man relaxed on a padded chair responds: “Do I look like I’d let a mothaf***er use me?!” he asks.

I assume the man sitting down is an actual cast member dating a female inmate.

The preview trailer doesn’t reveal an actual premiere date, but merely states that the new season of Love After Lockup will air this summer. Given that the trailer was released after the coronavirus pandemic was pretty much in full swing in the United States, I would have to assume that most of the filming has already been completed. I certainly hope so because quarantined fans DESPERATELY need a new season ASAP!

Normally, when a new Love After Lockup preview trailer is released, I will don my sleuthing cap and hit the interwebs to try to sleuth out some information about the new cast. Unfortunately, there really isn’t much to work with here. That being said, if you recognize the man in the trailer, or if you know anyone that might be on the upcoming season, be sure to drop me a line via the contact info below!

NOTE: I’ve noticed that some fans responding to the trailer release on WE tv’s social media accounts are a little confused and worried that none of the familiar faces will be back on TV. Love After Lockup is the original show and features mostly a brand new cast each season. Returning cast members are featured on the spin-off series Life After Lockup. There has been no official announcement, but it is assumed that there will be another season of Life after Lockup with returning cast members — perhaps including one or more couples from the new season of Love After Lockup.