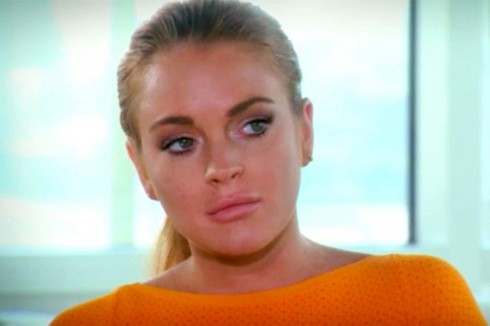 Lindsay Lohan sat down with Oprah four days after he latest, and longest, rehab stint. She was first at Betty Ford, and then transferred to Cliffside Malibu, staying a total of three months. The starlet has been to rehab six times in her life, starting in 2007, but she says this time worked.

The first was rehab stint was in 2007 at the Wonderland center for 30 days. Lindsay says she wanted to go there because she was scared after trying Ambien for a month. Just three months later she got a DUI, and was court-ordered to go to Promises. “I was really terrified, I didn’t know what to expect,” she says. “I didn’t know how long I was gonna be there. It was summer. I thought I was going to be missing out.” At that time, Lindsay says she didn’t think anything was really wrong, and felt resentful about the entire experience. “Resentment that I was there. That it wasn’t my choice. That it was out of my control.”

Perhaps that resentment and denial led her to decide to drink and drive again, because by August, 2007 she was back at rehab, this time at Cirque Lodge in Utah because of another DUI. “What happened was, after Promises, I got out and I got a second DUI within two months of leaving. The discussion was with the court ‘She’s going to have to go back into treatment.'”

For a few years all was quiet on the rehab front until July 2010, when she landed in jail for violating her probation. She only spent two weeks in jail because of “overcrowding,” but was sentenced to rehab again in August. She first went to the UCLA Medical Center, and then to Betty Ford that September.

Lindsay recalls being terrified when she was sentenced to jail for failing to complete alcohol classes. She claimed she couldn’t do it because of her work schedule, and told the court “I did do everything that I was told to do, and did the best that I could to balance jobs and showing up,” as she broke down into tears. “I don’t want you to think that I don’t respect you and your terms, because I really thought that I was doing what I was supposed to do.”

But Lindsay revealed to Oprah that part of her secretly wanted to go to jail at that time because she wanted to be forced to escape the chaos of her life. “Being in my addiction and everything, and seeing all the chaos around me. I somehow inside knew and kind of wanted to go to jail . . . to find some peace, and just to have no choice but to just sit and be.”

But why did rehab work this time? Lindsay says this time it’s going to stick because she finally surrendered herself to the process and is no longer in denial. She says she’s finally willing to accept that her way of doing things wasn’t working. “All I can do is live in each moment, and take every moment as it comes,” she says, taking a page from the 12-step program. She says she’s learned to ground herself and learned that she doesn’t need to go to “outside things or substances” to feel anything, that it’s all here.

Lindsay has been rumored to have abused numerous substances, including cocaine, which she once said she tried a couple of times, and now says she’s tried about 10-15 times, but there is one readily available substances that has been at the core of her issues.

Lindsay also said for the first time to the public that she’s an addict, and that her main problem is alcohol. She says alcohol has been the driving force behind any other drug she’s ever tried, and that she’s never injected anything. She says the main reason why she did cocaine because it helped her drink more, but she didn’t like because it made her feel terrible the next day.

Oprah: “Are you and addict?”

O: “And what is it that you are addicted to?”

Oprah points out that while she knows drug addiction is a disease, there is usually something else underneath that must be dealt with to prevent someone from turning to substances again. “So, are you now ready, at this time in your life, to heal whatever it is that’s kept you from being who you need to be?” Oprah asked.

Lindsay replied, “That’s what I’ve been doing for the past few months. It’s a process, and I continue to do it every day, which is just – a lot of stuff went on when I was young with my family. And I grew up in a very chaotic home, and there were moments with everything just being wonderful and perfect, and then things being so uncontrollable and chaotic that, it’s something that people go through and I’ve waited too long to face it even though I’ve been going to see a therapist for years and years.” Even so, Lindsay refuses to blame her parents for her problems. She emphatically stated that no one made her drink and drive, and no one made her do the things she’s done. She believes that “at this time” she doesn’t have a toxic relationship with either of her parents, and that they were scheduled to all have lunch together the next week.

Oprah pointed out that Lindsay was probably addicted to chaos because of her upbringing, and she agreed, saying she’d become comfortable with things that other people wouldn’t be able to live with.

When Oprah asked what the big difference was this time, Lindsay was quick to say “Not taking Adderall, that’s a big deal.” Lindsay says she thought Adderall was making her more calm, but now that she’s off it she actually feels more calm. She denies that she used Adderall as a diet aid, though she knows a lot of people who do that. She says she was taking the prescription drug for ADD, but is now off of all prescription drugs except Nexium for her acid reflux.

Lindsay says now, as she has said many times over the past several years, that she’s now ready to focus on working hard and rebuilding trust. This time, since she’s being more honest, and seems healthy and together, this may really happen for Lindsay. “As long as I stay honest with myself, and just do the work that I am willing to do, and have been willing to do, and am doing, then there’s nothing that can stand in my way of that. I’m my own worst enemy, and I know that, and I’ve been.”