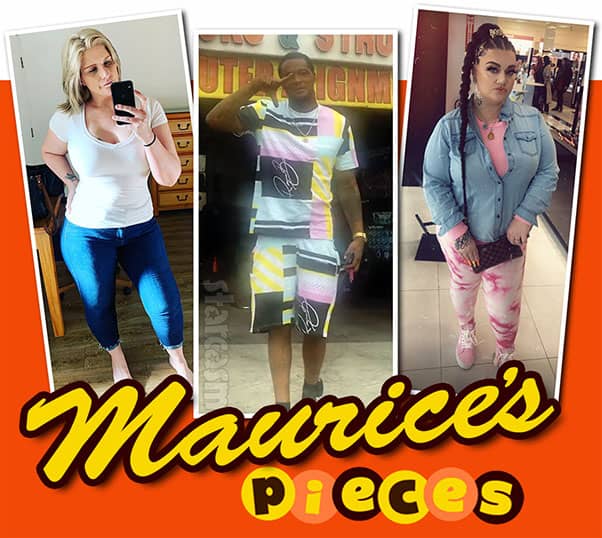 The messy break up between Love After Lockup couple Jessica Gipson and Maurice Gipson continues to play out on social media. In the latest developments, Maurice and his new Cali boo Mandy suggest that they are married — complete with a wedding photo. Plus, Jessica says Maurice is a deadbeat dad and Maurice responds by claiming that he actually supported Jessica financially while he was incarcerated by selling drugs in prison.

If you haven’t been following along with the drama over the past few months, Maurice has been living in California after being jailed there earlier this year due to a parole violation. He was scheduled to be released in late April, but he was reportedly unable to return to Las Vegas to be with Jessica and their son Maliq until he got his parole transferred to Nevada.

Jessica continued to insist that she and Maurice were still together — right up until a couple weeks ago when photos of Maurice and a woman named Mandy surfaced on Instagram. After the photos were posted, all hell broke loose between Jessica, Maurice and Mandy as the trio started going back and forth with accusations and varying relationship timelines.

The two ladies (aka “Maurice’s Pieces”) have been in a sort of Instagram flex-off attempting to post the most attractive photos of themselves using any filter necessary. Unfortunately for Jessica, Mandy had the advantage in that some of her photos also featured Maurice — including one that looks to be a wedding photo. 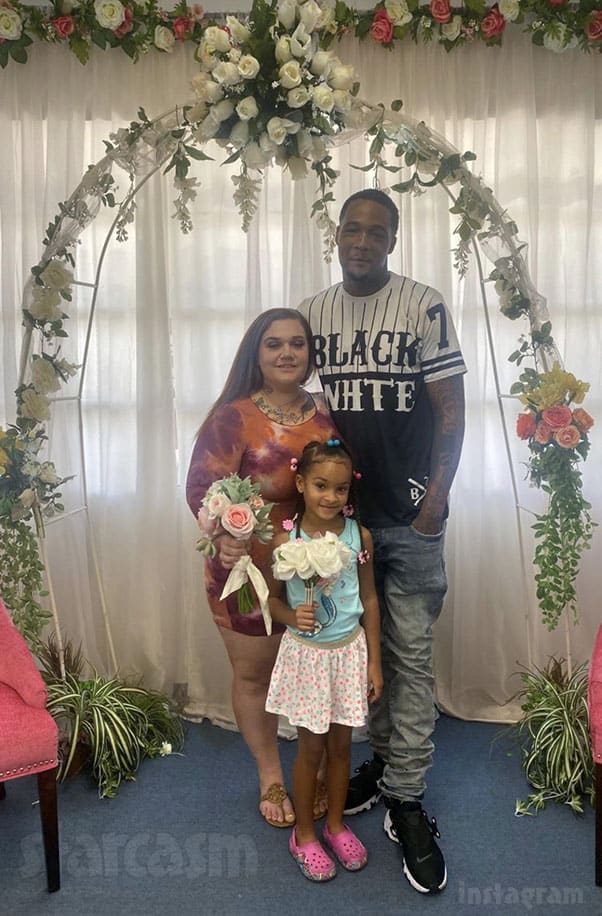 Are Maurice and Mandy married?

The marriage rumors began swirling after Maurice first referred to Mandy as his wife last week. “I love my wife wtf y’all think…” Maurice wrote in an Instagram story. “Yeah my wife that’s exactly what I said.”

On the same day as Maurice’s “wife” post, Mandy shared a cropped version of the wedding photo above with herself, Maurice, and her seven-year-old daughter. “They complete me,” Mandy wrote.

Here are a couple recent posts from Mandy in which she refers to Maurice as her husband and herself as his “real wife:”

I did a quick search and couldn’t find any record of a divorce filing or marriage license/certificate for Maurice. It could be that I missed it, but I seriously doubt that Maurice was able to get all of that done so quickly — especially with Jessica still defending their relationship just last month. I’m guessing Maurice and Mandy had some sort of faux marriage/commitment ceremony?

When did Jessica and Maurice break up?

Maurice shared a lengthy post earlier today in which he claims that he and Jessica haven’t been together “for like a year.” Jessica responded with alleged texts from Maurice from last week in which he asked her for forgiveness.

Look cuhz to clear the air me and her (Jessica) are not together and haven’t been together for like a year, and for the hatters saying my girlfriend/wifey is a Home wrecker that broke up a happy home well if the home was happy it wouldn’t never been broken up.. but for the record me and her is OVA, A wrap, done foe so plzzz stop FUCCin wit me and my baby girl..

Cant cheat on you if I moved on and said I’m done leave me alone..ijs 🤷‍♂️🤷‍♂️

Let me clear the air one more time I’m not with Jessica no more.. I got a new woman in my life ok so please fall back on the bs.. I’ve post pics videos all that y’all should of gotten the pic then but now I’m TELLIN y’all. And this ain’t no hack it’s really me posting this. 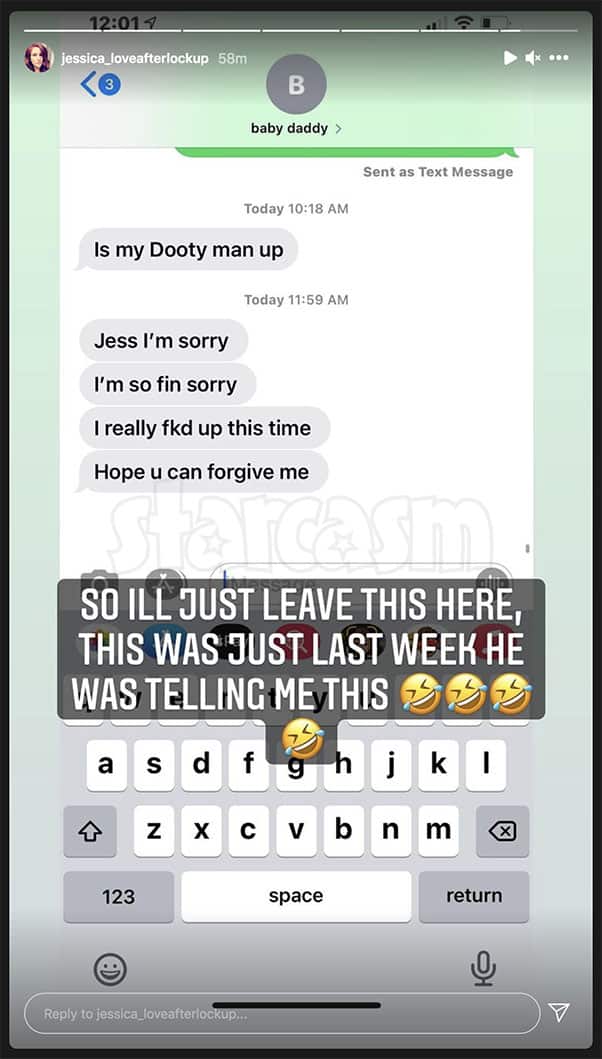 Jessica has made numerous claims that Maurice is not financially supporting her and their son Maliq since the split. “Smh, can’t even send a damn package of diapers, or wipes,” she wrote in an Instagram story post today. “Horrible, just horrible 🤦‍♀️🤦‍♀️ I can’t hold this stuff in anymore smh.”

“This sh*t is just too funny,” Jessica wrote in another post. “If you believe a word he says you are crazy, I save every message, video, voice message and I will prove everything I say is true about him.”

As mentioned above, Jessica and Mandy have been going back and forth on Instagram trying to look like the most attractive of the two known Maurice’s pieces. (Jessica’s have been mostly stories which are not longer viewable.)

This post is already extremely long, so I won’t include examples of their heavily filtered flex-off. I will only share the latest chapter from Mandy, followed by her defense for directly attacking Jessica’s appearance: 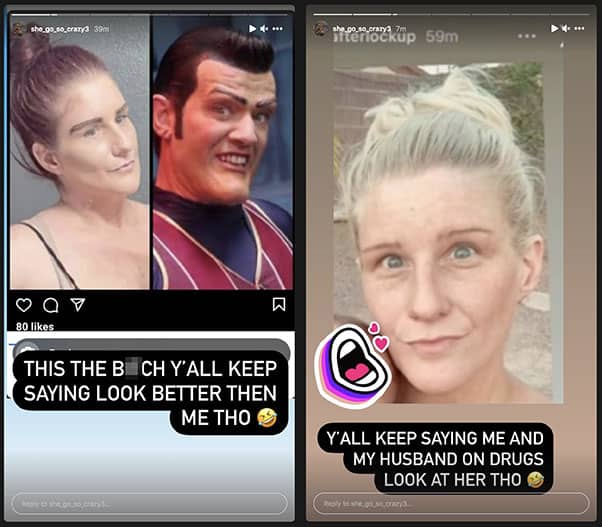 Maurice shared a series of Instagram story videos in which he insists that he is not a deadbeat dad as he blames not seeing his son on “bitter baby mama” Jessica.

Here is a transcript of Maurice’s videos from his stories:

She won’t even let me get my son, OK. She told me she’s not gonna be the bitter baby mama if we ever break up and all this — the b*tch is bitter now, OK? She’s jealous. She’s mad. She mad! She jealous of her [Maurice pans over quickly to show Mandy] OK? The b*tch is jealous cuz. That b*tch – she don’t… [clip cuts off] 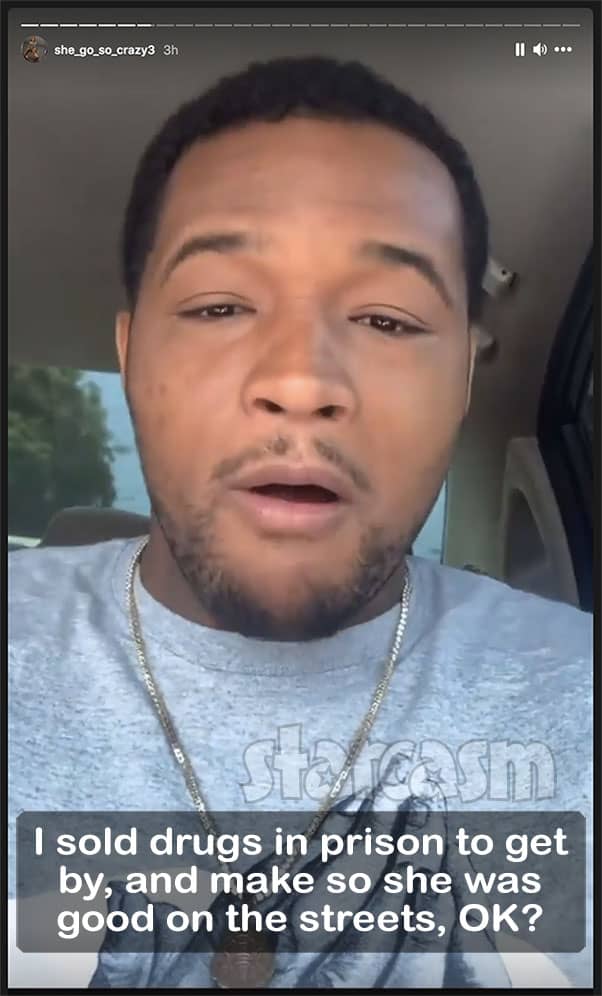 [Above is a screen cap from Maurice’s stories with a quote added.]

I sold drugs in prison to get by, and make so she was good on the streets, OK? Ask her those questions. Ask her, “Did he sell drugs in prison to make so you was good?” So y’all need to get y’all’s stories straight. Man, y’all get your facts straight before y’all try to say something because that b*tch ain’t break her neck for me. What, she drove to prison? Ok, that’s what she wanted to do. I didn’t make her do it, she wanted to do it.