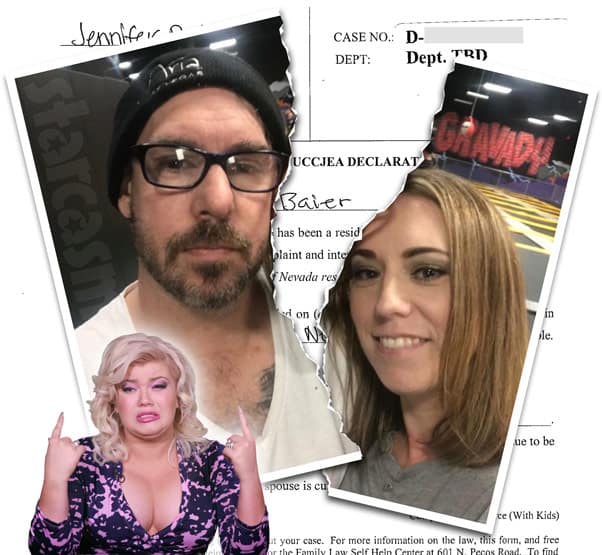 MTV’s Dirty John is moving on! Amber Portwood’s former deadbeat parasite beau Matt Baier may soon be a single man on the prowl yet again because his latest wife has officially filed for divorce.

Jennifer Baier filed the paperwork in Nevada on December 19, which was a little more than two years after the two got married on November 27, 2017. Matthew Appleseed fathered yet another child on January 1, 2019 when Jennifer gave birth to their son Christian.

As is Matt’s well-established modus operandi, it was not long after the child was born that Prince Charming began his metamorphosis into a toad. As we were the first to report, Jennifer filed for child support from Matt on February 21 — less than two months after their son was born.

It’s unclear whether or not Matt ponied up on the support, or if he was able to smooth talk his way out of it, but the last hearing scheduled in the matter on July 25 was vacated with no future court dates added.

In the divorce filing, Jennifer asks for full physical and full legal custody of their son Christian. She indicates that she will not be seeking any child support from Matt.

In the section of the filing that asks the petitioner (Jennifer) what “other considerations” the court should consider in determining custody, Jennifer put a check beside “domestic violence” and added “financially unfit” under “other.” She also checked the box indicating “State assistance or welfare has been or is being provided to parties in this case.”

Jennifer indicates there is no community property to divide, and more importantly, no community debt to divide. She also declares her intention to drop Baier and revert to her former last name of Conlon.

Jennifer had two daughters prior to marrying one of the country’s most infamous romantic con men and having a child with him.

After news of their marriage broke, Jennifer came to the defense of her groom with the all-too-familiar comments about Matt being a changed man. From our previous post:

“His past has nothing to do with the relationship,” Jennifer insists. “The life we have now is what we have now. Matt is a wonderful partner, friend and someone who listens. I take a person for who they are today and what they do now.”

She continued to fawn on Matt, enlightening all of us to the magnificent catch that he is — despite everything that he has done in his life for the last 35 years. “Matt is a wonderful man. What people think of him and how he’s portrayed, that’s not the man he truly is. He is everything and more. He’s generous and loving. It’s unfortunate that people think differently. Matt is a good man, yet he gets attacked in a way I don’t understand. That’s not the person in front of me. His actions don’t show that.”

As we mentioned previously, Jennifer is the mother to two young girls, and of course she believes that Matt is great parent to them — completely unlike his relationship with his 9-ish children. She concluded by summarizing her guaranteed happy ending: “He’s my best friend. He loves me for me. We look forward to having a beautiful life together. My life led to finding my soul mate.”

I can understand feeling bad for Amber because she (like many of Matt’s previous relationships) had no idea about his history. I simply cannot feel bad for Jennifer. I do feel bad for her son though. Bringing a baby into this world with Matt Baier as his/her father is just a terrible thing to do.

Oh, and if you’re curious, I believe the count was up into double digits as far as the number of children Matt has. And I’m guessing that number will somehow continue to grow. Stay tuned. 🙁

UPDATE – It seems Matt’s time in Sin City was not going well long before his marital troubles. Click here to get info on his multiple evictions (including one that also named his wife Jennifer) as well as the multiple civil suits filed by cash advance companies who claim Matt owes them money!

What to expect in Teen Mom Season 3: Amber Portwood and Catelynn Lowell