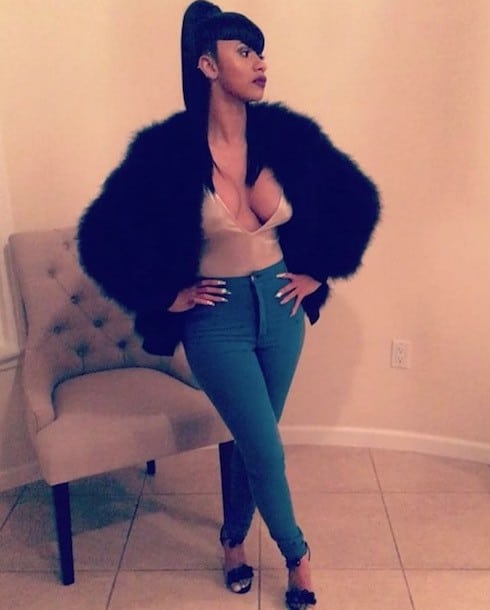 Unfortunately for fans of the show’s breakout star, the Love & Hip Hop New York rumors about Cardi B’s departure are true. Cardi is leaving the show following LHHNY Season 7 in order to focus on her next role–a venture into scripted drama with a juicy new part on BET’s Being Mary Jane.

We first reported on the rumors of Cardi B leaving the show this past summer, after she claimed she was thinking seriously about doing only one more season and then departing. At the time, the LHHNY cameras were rolling–and, as we’ve since learned from the first LHHNY Season 7 trailer, Cardi’s storyline this season will involve how she’s dealt with her newfound fame since going from a social media star to a legit TV icon.

What should fans expect from her new role? According to The Shade Room, Cardi’s Being Mary Jane character won’t be too much of a departure from reality: her name is Mercedes, and she’s a reality star, a “round-the-way beauty with a big weave, big boobs, and a big booty to match her oversized, ratchet personality.” Not that Cardi doesn’t have range, but it only makes sense that the producers would hire her for what she’s best at 😉

Of course, Cardi being Cardi, her departure didn’t come without a little drama, in the form of a social media war between herself and the actress who lost the role, then went on to throw some shade Cardi’s way. In a since-deleted post (one she took down because it contained a page of the script from what will be Cardi’s first episode), the actress said the only reason Cardi got the part is because she’s so “ratchet,” and the actress wasn’t “ratchet enough” for the producers. Obviously she meant this as an insult–but, given the description of Mercedes above, why would the show have settled for someone not ratchet enough?

As usual, gossip-masters Fameolous caught the post before it was deleted:

The chick who competed with @iamcardib for the role on #beingmaryjane is throwing shade at Cardi B for getting the gig. According to the woman, she didn't get the role because she wasn't "ratchet" enough! ???

And here’s Cardi’s response, which we’ve also transcribed below the video. (Not that you shouldn’t watch it, because it is hilarious.)

@iamcardib response to the girl who shading her over the #beingmaryjane role???

I know this b*tch ain’t talkin about, “Oh, I ain’t got the part because I wasn’t ratchet enough,” tryin’ to throw me shade. Well b!tch, I guess your pu$$y ain’t good enough either, because I remember when Neyo dumped your ass and kicked you out his house, and then you had to go sell your pu$$y in Africa….I don’t know why you industry hoes be tryin’ to play me like I don’t know where your pu$$y been at, and I could really, really, really, REALLY violate. So stop it, and keep on bartending, b!tch.

The best part of that clip has to be the makeup artist trying to keep from poking Cardi in the eye every time she gets vehement with those insults 😉 If you aren’t going to miss Cardi when she’s gone from LHHNY, you must be related to the woman who lost out on the part in Being Mary Jane.

There is a silver lining, though: the new season of BMJ is slated to begin airing in January of 2017, when LHHNY Season 7 is in full swing–so we’ll get a double dose of Cardi glory every week!